Why does "signature" have a "g" sound but "sign" doesn't?

But why is there a "g" sound in the following derived words? Signature, resignation, designate.

When the <gn> comes word-initially or word-finally, the /g/ often gets removed.

However, in word-medial position, the /g/ is sometimes pronounced when it's followed by a vowel (because it's allowed across the syllables adn the vowel splits it up into two syllables) and is not removed.

When the <gn> is followed by a vowel, the /g/ is usually pronounced except when some suffixes like -ing, -er and -able are appended. There may be lots of exceptions, however.

Examples: When the <gn> is not followed by a vowel, the /g/ is usually silent as in the following words:

These words do not have a vowel after the <gn>, so the /g/ is not pronounced.

These words have the /g/ because the following vowel splits up the /gn/ and makes it two syllables; /g/ moves to the preceding syllable while the /n/ moves to the next syllable.

However, some suffixes do not let the /g/ to be pronounced (I don't know the reason).

The reason boils down to English Phonotactics (that deals with restrictions in a language on the permissible combinations of phonemes).

Therefore, we don't have clusters like /pn/, /tn/, /kn/, /bn/, /dn/ and /gn/ etc in English because they violate the Phonotactics constraints of English.

So when the <gn> is followed by a vowel, the vowel splits up the /gn/; the /g/ moves to the preceding syllable and the /n/ moves to the next syllable.

Greg Brooks in his Dictionary of the British English Spelling system writes:

But it doesn't explain why the /g/ is not surfaced in those inflectional words.

Another relevant quote from An Introduction To Language by Victoria Fromkin, Robert Rodman, Nina Hyams: 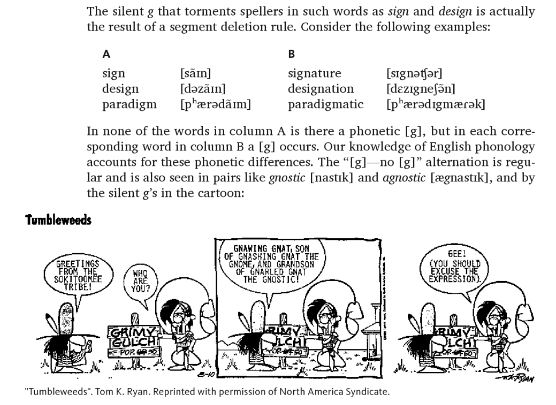 Nathan (2008:82) asserts that not only can segments be deleted, sometimes they can be inserted instead. There seem to be two basic reasons for insertion: preventing clusters of consonants that violate syllable structure constraints in the language, and easing transitions between segments that have multiple incompatibilities — Research Gate

Why is 'signature' not pronounced [saɪgnat͡ʃə]:

Why is 'signature' not pronounced with a long vowel in the first syllable?

It's because of a fairly common phenomenon called Trisyllabic Laxing, it is a process whereby a tense vowel in a stressed syllable is shortened if two (or more) syllables follow.

Long vowel before the <gn>:

Short vowel before the <gn>:

Yeah, just to add a bit to @Decapitated Soul's excellent answer above, the reason that sign has that ⟨g⟩ in the first place is that it was formerly pronounced in the Latin noun signum and verb signare and all their derivatives. English spelling tending to be more etymological than phonetic (for better or worse), it's been preserved even as the sound died out.

Of course, the Latin words do break the ⟨gn⟩ cluster across two syllables, as does the uncommon English borrowing signum which continues to pronounce the ⟨g⟩. For sign, that ending disappeared as Romance languages simplified Roman cases and Middle English nixed most of them altogether as it gradually merged Old English with a bunch of new French loanwords.

A minor quibble with DS's answer is that pronouncing ⟨gn⟩ inside a single syllable isn't really banned by English phonology. People were still pronouncing the ⟨g⟩ in words like gnomon as late as the 17th century. What did change was that English slowly standardized more of ⟨g⟩'s weirdness. The initial ⟨γν⟩ in Ancient Greek wasn't pronounced /gn/ but /ŋn/. As English began to standardize 'hard g' towards being a full stop instead of an occasional nasal, though, that became too uncomfortable to bother with.

Another minor quibble is that for sign & co., it really had little to do with English's own phonology. Norman and Middle French had already dropped the /g/ from their pronunciations before it entered use in English, as shown in their variant spellings sein, seine, sine, seing.

Not the answer you're looking for? Browse other questions tagged pronunciation orthography pronunciation-vs-spelling phonology or ask your own question.

155
Why are the vowels in Christ and Christmas different? (and other strange diphthong behaviour)
45
Does the quirky spelling in English actually make it easier to read?
32
Is there an etymological explanation for the silent ‘g’ in “paradigm”?
7
Is there a reason why "gn" in "reigning" is pronounced /n/ while in "regnant" it is pronounced [gn]?

2
Why are "put" and "but" different in their pronunciation?
2
Why is "me" pronounced like "me" but "ne" is not pronounced with the same e sound?
7
Does any native English word contain the 'ñ' sound?
2
Why are "fun" and "hulk" phonetically transcribed with the same vowel but pronounced differently?
10
Why doesn't English spelling vary with region that much?
11
Why do some words with similar meanings sound similar as well?
9
Why does "appropriate" (and also "duplicate", "deliberate" etc) have a different vowel in their adjective/noun and verb forms?