Ask Question
Asked 2 years ago
Modified 1 year, 3 months ago
Viewed 2k times
1
Closed. This question is off-topic. It is not currently accepting answers.

How did "hoose" come to be used to mean "house"?

Hoose: Hoose is a disease of sheep, cattle, goats, and swine caused by the presence of various species of nematodes of the genera Dictyocaulus, Metastrongylus, and Protostrongylus in the bronchial tubes or in the lungs. It is marked by cough, dyspnea, anorexia and constipation. Also called verminous bronchitis.apv

Pronunciation of 'house' as hoose:

The pronunciation /huːs/ is a remnant of Old English in some dialects of Present Day English. In Old English, 'house' was written hūs and it would've been pronounced /xuːs/1 or /huːs/.

In Middle English, it was pronounced /huːs/ (hoose). The Great Vowel Shift changed the qualities if almost all the long vowels. It changed the original long vowel of 'house' /uː/ to a diphthong /aʊ/ in most dialects; however, as the Wiki article notes, the shift didn't operate on long back vowels in Northern English because they had undergone an earlier shift. That article also says that /uː/ remained unaffected. 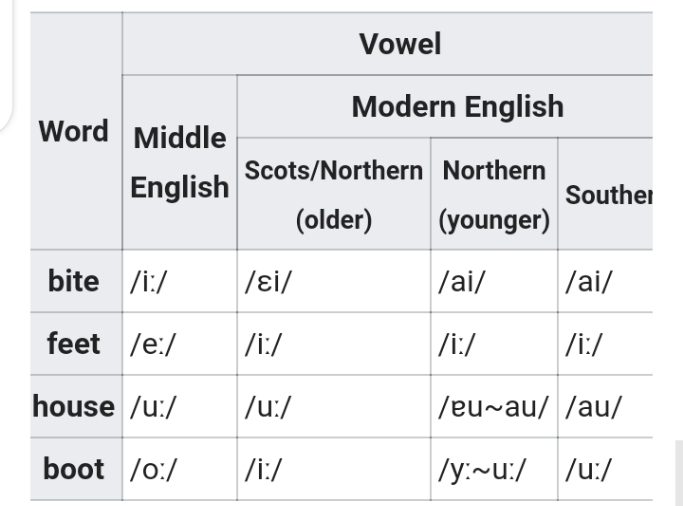 There's also a disease 'hoose', though that is with a /z/ sound at the end.

Hoose, a Scottish variant of house:

(History of the Scots language)

Hoose is present also in Northern England and as The Oxford History of English notes about the GVS:

There are two words involved in your question:

1a. Hoose, in the Scottish and Northeastern English dialects, pronounced /huːs/ (rhymes with "noose") = a dwelling place.

(There are many other spellings of dialect versions of "house", one of which is 19th century Irish English "hooze")

0
A word/phrase meaning the "house where I was born"?
0
"Floors" for a house
1
treasure house ? treasure house city?
3
"cathouse," "call house," and "sporting house" for "bordello"
2
What's different between "put house down" and "put house up"
0
Semi detached house meaning
2
To “travel” inside a house?