'And': Conjunction Reduction Redux By Barry Schein (linguist) has this passage: 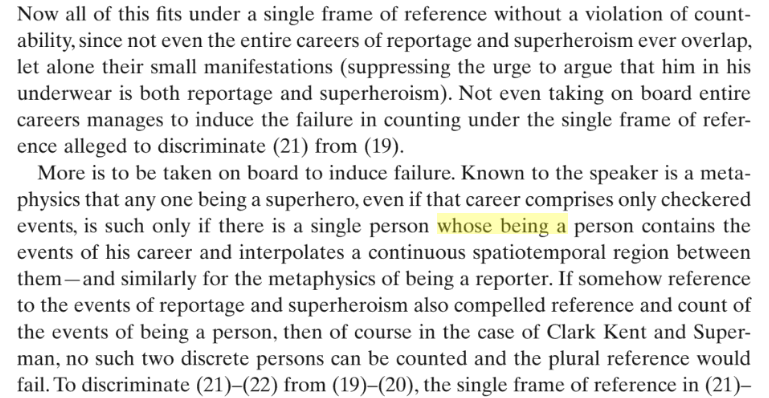 How natural does whose sound?

Can you use who or whom instead?

If this were a personal pronoun, the nominative wouldn't be possible:

*He being a person contains the events of his career.

And either the accusative or possessive would be possible:

His being a person contains the events of his career.

Him being a person contains the events of his career.

Even though we need not a personal pronoun but a relative pronoun here, I wonder if the same case treatment is in order, i.e., if the nominative who is banned and only the genitive whose and the accusative whom are allowed.

In case the meaning of the sentence containing whose is difficult to grasp from the given quote, the metaphysics known to the speaker is this:

Whose being a person seems to be - possessive adjective + gerund + NP.

That said, I strongly advise that you write to Barry Schein and ask him to review the paragraph as it is all but incomprehensible.

The entire sentence sounds highly unnatural because of the very complicated and technical point that it is trying to express.

I had to read through the passage and sentence a few times to understand the structure. After doing that, I grudgingly find whose acceptable here.

Whom seems completely unacceptable to me. As you know, English does not truly use whom as a regular "accusative case" form of who; the form who is typically used for both "nominative" and "accusative" functions, with whom showing up in more or less artificially learned constructions (or in "hypercorrect" contexts). I don't think it makes sense to assume that there is a strong correlation between the acceptability of him and the acceptability of whom in a sentence: the idea that they function the same way is a prescriptive rule, not a natural part of English grammar.

In any case, "Him/his being a person contains the events of his career" sounds very odd itself, even if it is not truly unacceptable.

Who also seems unacceptable to me.

In normal speech, I would not expect to see a verb phrase being used as the subject of a relative clause like this. I'm wondering a bit whether the use of whose here only seems possible to me because of the influence of relative clauses starting with whose that look similar on the surface but that have a noun phrase instead of a verb phrase as the subject. Maybe I'm mentally converting the verb phrase "being a person" into a nonce compound noun "being-a-person".

Not the answer you're looking for? Browse other questions tagged gerunds subjects relative-pronouns grammatical-case or ask your own question.

155
What’s the rule for using “who” and “whom” correctly?
2
What’s the ‘accusative absolute’?
8
"Being [he/him] is not easy." Which is prescriptively "correct"?
10
What's up with "this," in Old English(Ænȝlıſ͡ċ/Anglo Saxon‽)
1
Who vs. whom when the he/him test is unclear