What is the grammatical usage the phrase "for this most private of moments."?

I came across this phrase when I was watching a movie review of Call Me By Your Name. The narration goes "just as they're uncomfortably far away from each other, in a public space for this most private of moments."

I wonder why it's not "most private moment" instead. I have not seen any sentence structure quite like this before and I failed to find it anywhere.

It would be helpful if more examples can be provided of how this grammatical item is used including usage of other possible varieties (i.e. adjective in comparative form, singular nouns, uncountable nouns, other prepositions)

Link of the video: https://www.youtube.com/watch?v=P-mBOneiKUs Starts at 1:47, CC subtitle available.

It amounts to the same thing as "this most private moment".

Arcana Cœlestia. Emanuel Swedenborg - 1840 - ... to which He conjoined Divine Truth from the Human principle; concerning this greatest of mysteries more cannot be said, only that it was the very essential Divine Good and Truth in the Lord's Divine Human [principle] whereunto truth from

The Nature of Enlightenment: The Dawn of Awakening in the West P. F. Martin - 2005 - ‎ This greatest of mysteries is also the source of all phenomena including the phenomenon we call our “self”.

The Greatest Adventure: Basic Research that Shapes Our Lives Eugene H. Kone, ‎Helene Jamieson Jordan, ‎Society for American Archaeology - 1974 - ‎ ... which is the last of all the frontiers of knowledge that man can attempt to pass and encompass . We ' ll never run out of questions on this greatest of all problems confronting man , because they multiply far faster than we can answer them !

this most beautiful of

The Most Beautiful Woman in Florence: A Story of Botticelli - Alyssa Palombo - 2017 - For what better inspiration could an artist have than this most beautiful of brides on her wedding day?” “Indeed,” Marco said again. 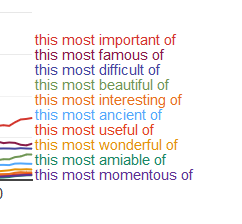 Here are two examples for the form of the superlative in one single word: this rarest of, this busiest of. It is a very common construction, used with many adjectives.

addition in answer to supplementary precisions needed by user FindingNemo

I I wonder if it's that we are using the superlative adjectives here as a noun, like "the rich", "the injured', but only in superlative form.

No, this is not the case; instead, this construction has to be regarded as an idiomatic one, its meaning being defined as that of a lexical item except for the changes allowed in the idiom (adj., noun). Let's examine a few examples from the Google research "this most * moment,this most * of moments" (ngram).

It can be remarked that for two of the ajectives both forms are present in the results; they are "critical" and "inopportune". It must be understood that if both forms are not present for all adjectives the reason is essentially that people are not inspired in an equal fashion by all forms. A reading of the following examples shows that there is no difference in meaning (bolded type has been added).

By reading more extensively the results of this research, for instance, those concerning "inopportune", you should finally be convinced that there is no difference in the meaning conveyed by the form with "of" and that without.

II Can we also use comparative forms? E.g. "The more enjoyable of moments", "The sweeter of fruits" does it sound natural to you?

No, those constructions are not part of English; I have never read them.

I find for instance this example;

• ref. 1, ref. 2 ... of cinnamon, 2 gallons of syrup, and 1 gallon of water. This is much sweeter than the ast. The weaker a cordial is of spirit, and the sweeter of sugar the more oil it requires to bring it up to the desired pungency, hence the great quantity of oil ...

One must not construe this form as having a similar meaning. It means "the sweeter it becomes as more sugar is being added".

I find also this other one (ref.). 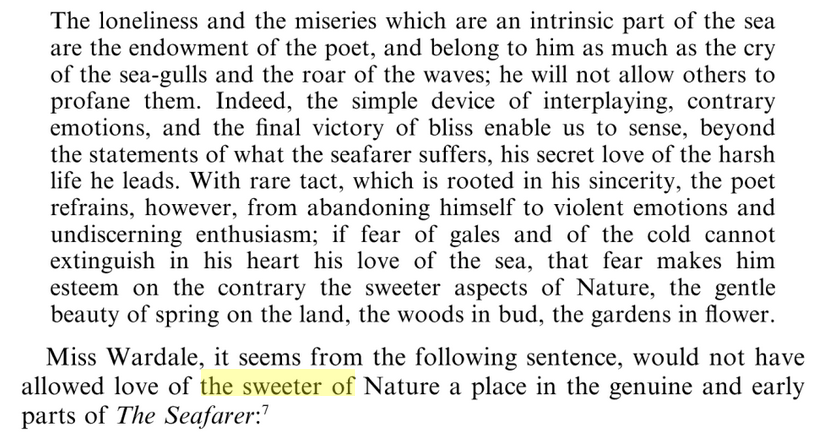 There is in this construction no real comparison; the comparative adjective is nominalized, and becomes the head of the noun phrase "the sweeter of nature", which is to say in other words "all of that that is contained in nature and that has a high degree of sweetness" or perhaps better put, "all of the sweeter things in Nature".

III Can the noun be uncountable? E.g. "The most hardworking of staff", "The most beloved of cuisine"? –

Yes, it can; "the greatest of ease", for instance has been much used and it is still common enough (ngram); however, there might exist in this particular usage of uncountable nouns certain questions of idiomaticity; I have no way to know. For the two nouns you choose (staff, cuisine) there is no widely use adjective (ngram).