Why does "blue blazes" specify the color blue, and what is the origin of this expression as an intensifier/euphemism?

A recent question posted on English Language & Usage (What does "blazes" mean in "Stay the blazes home!") asks where "blazes" originated as an intensifier. In attempting to answer that question, I found instances of "hot as blazes" going back to 1823. But it occurred to me today that the expression "blue blazes" might be related to the emergence of "hot as blazes"—and this in turn led me to wonder where "blue blazes" came from.

blue blazes early 1800s 1 n phr Hell: What in blue blazes are you up to? 2 adv phr Like hell: ... lying blue blazes—Ken Kesey {fr the sulfurous blue blazes of Hell, an extreme environment}

The Wikipedia article on sulfur confirms the flame color:

Sulfur burns with a blue flame with formation of sulfur dioxide, which has a suffocating and irritating odor.

But is that the original rationale for "blue blazes"? Also, when and where did the earliest recorded instances of "blue blazes" and "blue blazes of hell" occur?

The earliest usage GDoS suggests is from AmE:

According to the Word Detective:

The choice of “blue” is probably largely due to the alliterative charm of having two initial consonants in the phrase “blue blazes.” But the fact that it’s well-known that the hottest fires burn with a blue flame probably played a role as well. So “blue blazes” probably does, indeed, have some connection to a very intense fire, but not specifically the blue glow of a lime kiln.

To the alliteration point I’d also add that “blue” is used also as a general intensifier:

Blue, on the other hand, appears to be a very common and versatile term especially in colloquial usage:

Few words enter more largely into the composition of slang, and colloquialisms bordering on slang, than does the word BLUE. Expressive alike of the utmost contempt, as of all that men hold dearest and love best, its manifold combinations, in ever varying shades of meaning, greet the philologist at every turn.

As a supplement to the existing fine answers, I note that the association of 'blue' with hellfire certainly predates Shakespeare (see Richard III, 1597: "The lights burne blew. It is now dead midnight."), and likely dates to classical antiquity. That association probably owes as much to the quality of the light emitted by a blue flame (that is, dark and dim) as to the color of the flame of burning sulphur. As observed in the OED for a phrase first attested from King Richard III,

P1. to burn blue: (of a candle or lamp) to burn with a blue flame, traditionally taken as an evil omen, a portent of death, or a sign that a ghost or the Devil is present; also figurative.

Perhaps from the blue flame produced by burning sulphur (brimstone), associated with the fires of hell.

The OED suggestion perhaps puts the cart before the horse; it seems as likely that blue was associated with hellfire in antiquity (caeruleus ignis) before the color of the flames of burning sulphur.

From that traditional, long-standing association of dark (midnight) blue and the light in hell, the 'blue' in the 'blue blazes' collocation rises as a matter of course. For example, see this use of 'blue fires' in the 1607 tragedy, Bussy d'Ambois, by George Chapman:

Why calledst thou me to this accursed light?
To these light purposes? I am Emperor
Of that inscrutable darkenesse, where are hid
All deepest truths, and secrets neuer seene,
All which I know, and command Legions
Of knowing spirits that can doe more than these.
Any of this my guard that circle mee
In these blew fires, and out of whose dim fumes
Vast murmurs vse to breake, and from their soundes
Articulat voices; can doe ten parts more
Than open such sleight truths, as you require.

Additionally, it would be premature to conclude that 'blue blazes' originated in the USA. The earliest use of the exact phrase that I've found appears in the (paywalled) 8 Dec 1807 issue of The Public Ledger, a London-based publication. The quoted speech, however, was said to have occurred in the countryside near Dublin, Ireland, and the speaker was Irish:

"Blue blazes to your soul, we are not robbing you, we are only distraining you for the King's Silver and Custody Rents!"

Devil. But that, which displeases me more than anything else, is their habit of attributing to me the origination of a thousand pitiful sneaking little criminalities, with which, I swear by the blue blazes of Tophet, I would not dirty my fingers. My conscience is, certainly, not very troublesome; but I indubitably would not debase my infernal dignity so much as to assist in the perpetration of a thousand little meannesses to which men are addicted.

Robinson was evidently from Tennessee, and his usage seems colloquial and (to judge from its repeat appearance) at least personally habitual.

It next appears in Mason Weems, The Drunkard's Looking Glass: Reflecting a Faithful Likeness of the Drunkard, in Sundry Very Interesting Atitudes, (1812/1818), as cited in Hachi's answer:

YE STEEP DOWN GULPHS OF LIQUID FIRE! YE BLUE BLAZES OF DAMNATION!——But hush, thou false zeal, hush! and curse not him whom Christ hath commanded you to pray for.

Here the "blue blazes" seem to refer to the alcohol itself. And indeed both methanol and ethanol burn primarily with a blue flame. As this excerpt indicates, Weems's book is cautionary to the point of didacticism. Wikipedia reports that Weems was a clergyman and author, originally from Maryland; he is best known for his early (and not terribly reliable) biography of George Washington, which may have been the source of the "I cannot tell a lie" cherry tree story.

The third-earliest mention of "blue blazes" that I've been able to find is from 1814 and arises in the context of a dream about being dragged to hell by overpowering devils. From Lorenzo Dow, History of Cosmopolite : or, The Four Volumes of Lorenzo's Journal (1814):

And when I got within sight of hell, to see the blue blazes ascending, and to hear the screeches and groans of devils and damned spirits, what a shock it gave me, I cannot describe : I thought that within a few moments, this must be my unhappy lot.

Wikipedia describes Lorenzo Dow as "an eccentric itinerant American evangelist, said to have preached to more people than any other preacher of his era." The dream he relates occurred when he was about 14 and profoundly affected his religious views. The phrasing seems to be primarily descriptive (the blazes in his dream were blue) rather than primarily alliterative.

All three of the books cited in this answer were quite popular in their day and may have contributed to the popularization of "blue blazes" in the United States. I can't deduce from these three early examples whether the expression originated in brimstone sermons or in the colorful colloquial speech of US post-colonials. Both areas of usage may have helped propagate the expression.

The fact that both sulfur and alcohol burn with a blue or primarily blue flame is not irrelevant to the early instances of "blue blazes" noted here, but I would hesitate to endorse Chapman & Kipfer's assertion that the connection between the expression and sulfur's flame color explains its origin dispositively.

And as various others have noted, alliteration surely played a role in enhancing the phrase's appeal, as well.

"Blue blazes" is a reference to hell, which according to Christian tradition is filled with brimstone, that is, sulfur. The answer is as simple as this: sulfur literally burns blue. 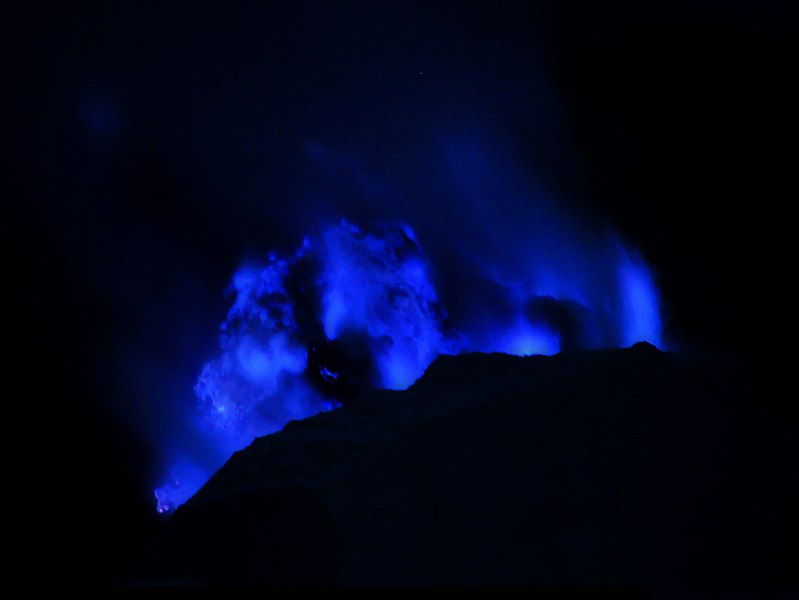 Glance in the OED,

Blue, 3, [ ] (of language) marked by cursing, swearing, and blasphemy.

(If you're not an English speaker, example "blue movies" (pornographic films), "blue language" (much swearing.))

It's utterly common in English that words have more than one meaning. The "blue" here is completely unrelated to the color.

(Other completely unrelated meanings of "blue" are "sad", and a type of 20th century music.)

Not the answer you're looking for? Browse other questions tagged expressions slang history phrase-origin euphemisms or ask your own question.