How do you pronounce sixth time?

For example: Lionel Messi has won the Ballon d'Or for the sixth time.

It's quite difficult to pronounce the /ksθ t/.

The /sɪk/ part is easy but after that, the /sθ/ and then the /t/ right after /θ/ becomes difficult.

The way I pronounce 'sixth time':

(It's almost impossible to pronounce 'King James sixth's third daughter' (King James VI's daughter). Does anyone know how to pronouncee it?

The Longman Pronunciation Dictionary (2000 ed.) stipulates that "sixth" is pronounced "/siksθ/" [at least in isolation] but also [as a minotity pronunciation] "/sikstθ/"; "/sikθ/" is considered to be an error. Similarly "sixths" is "/siksθs/"; "/sikstθs/ is acceptable while "/sikθs/" must be rejected as a possibility (for the time present, anyway). A note in this entry for "sixth" and "sixths" reveals that 'in casual speech, both sing. and pl. are "/siks/" or "/sikst/"'.

"/siksθ taɪm/" [the "ideal" pronunciation, that is particularly difficult in rapid speech]

So, according to this dictionary of RP, you can either add a /t/, suppress the /θ/ or replace it with "/t/".

My impression is that there is no better way to pronounce that and similar constructs than the one you detail precisely (the "ideal" pronunciation), keeping in mind that they should be uttered leisurely and are not at all of the sort of word combinations that can be spoken at the top of your voice for communication to people far away from you, nor to be used in rushed speech; confronted to those situations one must think of saying for instance "tin number six" instead of "sixth tin" or abstain from a reference to order.

Personally, I do not find this pronunciation unnatural but difficult and the idea that it takes much time seems wrong, it must the result of the effect of the long consonant sequence, I think: there is but one single sound added( /θ/).

For "king James sixth's third daughter" the difficulty is greater and I stumbled the first times I tried but found that nevertheless, pronouncing the words without hurry, and keeping them apart, that is, saying them without tying them together and thus preserving their individuality, made this exercice not so forbidding. Strangely enough, the pronunciation of the s of the possessive case appears to be deprived of the usual grammatical meaning that the Saxon genitive communicates without fail when one hears it; it tends to feel like mere sound, however successful is the pronunciation.

This user seems to have removed some of the difficulty from the pronunciation of "King James sixth's third daughter" by means of a sequence of speech stages in which the key is an appropriate choice of the two more or less optional positions of the tongue for the pronunciation of /θ/.

I have learnt how to pronounce 'King James sixth's third daughter' says he at the beginning of his explanation.

It must be understood that the accent that is the main concern of this dictionary is RP, GenAm being treated too but not as expertly. Words such as "stipulate" do not go further than the particular accent concerned: for instance, if you intend to remain within RP you have to use /hɔ:l/ for the pronunciation of "hall"; if now you think that /hɒ:l/ suits you better, you can choose this prononciation (and you have to use it if you want to have an American accent) but this is not a usual pronunciation in RP. The necessities expressed by the terms I use are no more prescriptivist than that: they are not used to discriminate within a given accent and impose one form rather than another in that accent but they merely indicate that for the given accent there is no other standard.

Unfortunately, I have no link to this dictionary, but I don't mind adding a numerization of that part of it showing these pronunciations. 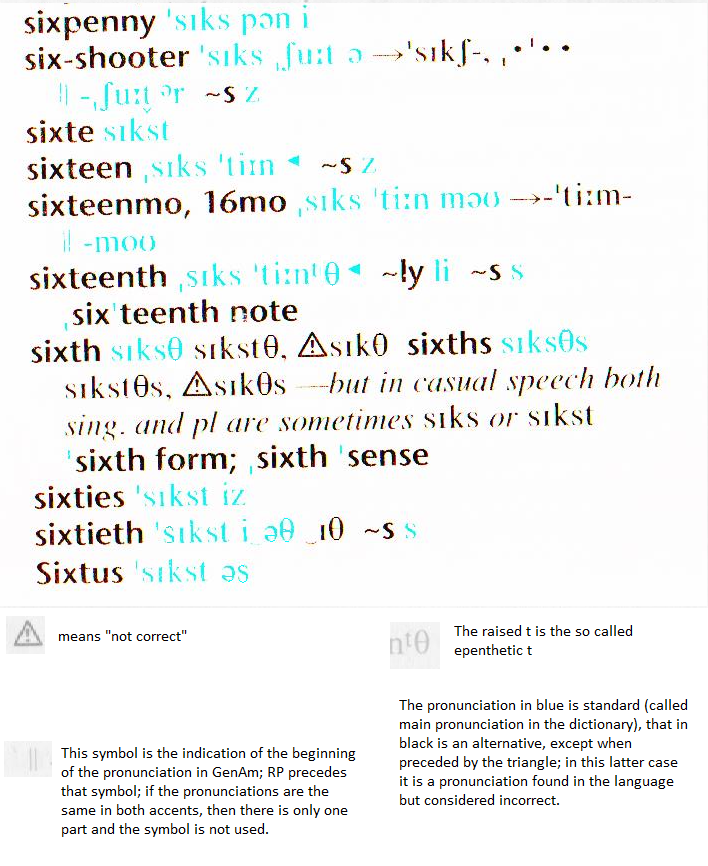 Not the answer you're looking for? Browse other questions tagged pronunciation linguistics phonetics consonant-clusters or ask your own question.

4
th followed by an s sound
4
How do you pronounce ¹⁄₁₂?
5
Why do English people pronounce 'sixth' as 'sicth'?

1
For word pronunciation that have 2 consonants standing next to each other and at the end, Do we have to fully aspirate both of them?
0
Could you clarify this “Intervocalic Consonant” theory: “consonants are syllabified with the more strongly stressed of two flanking syllables.”?
5
Can most native English speakers pronounce the alveolar trill? (The R in its most emphatic version)
2
Difference in pronunciation: “cookie” and “kooky”
3
Pronunciation of “comedian” and “chameleon”
4
Peculiar pronunciation of 'architecture'