Why is it “Merry” Christmas, but “Happy” New Year?

Happy Christmas just sounds wrong to my American ear. (I do get that it is customary in England.) Merry New Year, equally so. Of the two, Christmas is the younger holiday and yet its greeting seems to be the more archaic.

So, my question is this: how did these greeting wishes get stuck with these holidays, and not the reverse?

Looking at the definitions of merry and happy, I would suggest that merry implies more short-term jollity, and happy more long-term contentment. That would square well with the Merry Christmas and Happy New Year usage.

It might also be worth noting that merry is used in phrases like play merry hell, play Merry Andrew and the alternative meaning of merry (meaning 4) meaning somewhat inebriated, which are all short-term (one hopes) states of affairs.

Merriment is having some good fun, while happiness is a much broader term, relating to overall well-being with all necessities of life, and so on.

Christmas is a time of celebration and therefore a 'Merry Christmas' would be appropriate. A new year, as in 'Happy New Year', on other hand, extends over a whole year (and further on) and as such the sense of good luck, good fortune and prosperity provided by Happy would be appropriate.

But without the business of gift-giving that sprang up in the 19th century, Christmas might still be what it once was for many people: a riotous bacchanalia in which drunken gangs brawled in the streets and bashed their way into houses demanding money and alcohol.

In the 16th through the early 19th centuries, according to the Oxford English Dictionary, “merry” was a synonym for “drunk.” That connotation still lingered when, in Charles Dickens’s “A Christmas Carol” (1843), two men “wished each other Merry Christmas in their can of grog.”

So at least in the 16th c., people were getting merry (= drunk) at Christmas. As can be seen by the Dickens reference, this historical usage persists on the American side of the pond.

But you might object: Isn't there plenty of drinking on New Year's Eve? Again, history plays a role.

A prominent educator and patron of the arts, Henry Cole travelled in the elite, social circles of early Victorian England, and had the misfortune of having too many friends.

During the holiday season of 1843, those friends were causing Cole much anxiety.

Cole hit on an ingenious idea. He approached an artist friend, J.C. Horsley, and asked him to design an idea that Cole had sketched out in his mind. Cole then took Horsley’s illustration—a triptych showing a family at table celebrating the holiday flanked by images of people helping the poor—and had a thousand copies made by a London printer. The image was printed on a piece of stiff cardboard 5 1/8 x 3 1/4 inches in size. At the top of each was the salutation, “TO:_____” allowing Cole to personalize his responses, which included the generic greeting “A Merry Christmas and A Happy New Year To You.”

It was the first Christmas card.

(From "The History of the Christmas Card", by John Hanc, published at SmithsonianMag.com.) 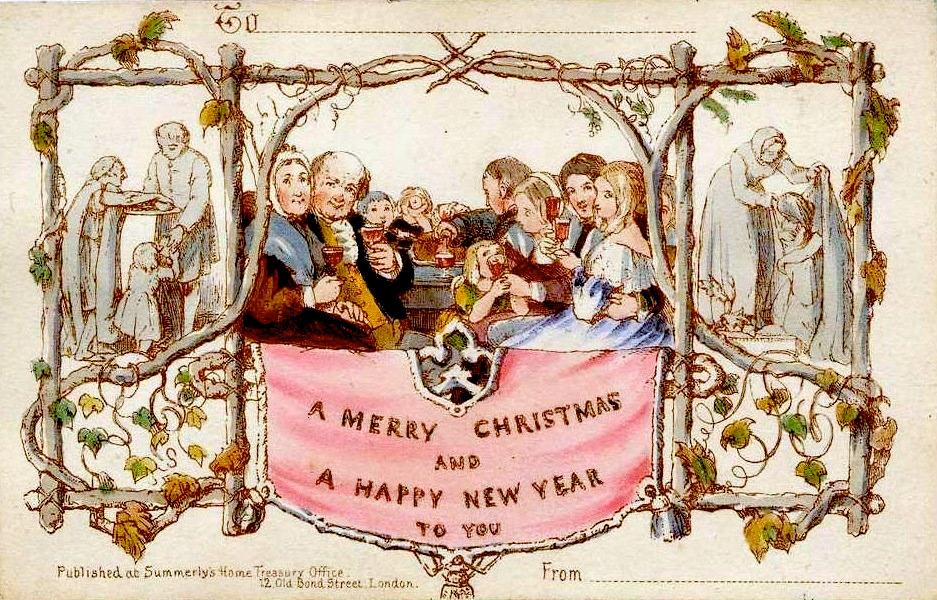 "A Merry Christmas and A Happy New Year to you" were on the first Christmas Card and have stuck.

As Gnawme said, we're perfectly happy with 'Happy Christmas' in the UK. But when we put the two together, we'd probably say 'a Merry Christmas and a Happy New Year'. Why that way round? Well, as you say, 'Merry New Year doesn't sound right', and I think Kris has given you exactly the answer why.

merry Christmas and happy New Year are the commonly ones known by all. In my opinion, merry simply depicts vivacity and optimism. In this sense, it suggests more should be expected in the years ahead. Whereas happy unsophisticatedly demonstrates pleasure, satisfaction, gratification or fulfillment.

You can vividly conclude that merry which means expectation. It ushers individuals into the state of fulfillment, satisfaction and excitement into the present and future. Hence, it is just appropriate to have Merry Christmas and Happy New Year rather than Happy Christmas and Merry New Year.

Additionally, Christmas is commemorated within the last few days to the closure of the year, and it is short lived and enjoyed, while New Year has a lengthy period. It means before the next merriment, you would have been fulfilled, satisfied and willing to gratify the maker of all things for another merry Christmas which places you in high pedestal of expectation before stepping confidently into another new year. -- Rachel Pauline Aikins, Ghana, East Legon

Why is it “Merry” Christmas but “Happy” New Year? Could we say Merry New Year, which sounds wrong to me? Merry is attached only to Christmas, not to New Year.

Not the answer you're looking for? Browse other questions tagged etymology christmas or ask your own question.

18
Is there a season's greeting for Halloween?
14
One word for Christmas?
8
Who originated "Merry Christmas"?
6
Determining which good sentiment to wish at each holiday
0
Happy Merry Christmas vs Merry Christmas
0
Merry Easter to all of you!