What is the agent noun of the verb mirror?

A google search made me realize that the the agent noun of mirror doesn't exist. What would such a word be if it did?

My best guess would be mirroror following the word mirroring and using the agent noun suffix for laten verbs.

edit: The word I'm looking for would be used to refer to a person who mirrors others in speech and action.

Mirrorer does exist, it is just very rare, and possibly not found in any dictionaries. But here are three examples from Google Books of it being used (bolding added by me):

The pronunciation is obviously awkward, but that didn't prevent these authors from using it when they needed a word meaning "someone who mirrors/is mirroring".

I think that the form "mirrorer" is both more likely and more preferable than the form "mirroror". As I explain in my answer to the question that you linked to, "-or" is not just a suffix used on verbs of any form that in some way come from Latin. In Latin, the agent noun suffix was really "-tor" or "-sor", so agent nouns in "-or" that come from Latin generally only exist for verbs that end in "t" (actor), "s" (suppressor) or "se" (supervisor). There are also some -tor and -sor agent nouns that are not actually attested in Latin, but that look like possible Latin agent noun forms.

Mirroror does not look like a Latin agent noun form. The verb "mirror" does not end in "t" or "s". It is an English "verbing" of a French noun. The French noun actually already ended in the French agent suffix "(e)or" (a suffix that was derived from Latin "tor" with weakening of the consonant "t"). Since the word mirror is neither Latin nor a verb in form, it can't really take a Latin agent noun suffix.

There is an English agent noun suffix -or, derived from the French suffix (e)or mentioned above. This -or suffix is found in words like sailor and settlor, but it is less usual and less productive as a means of forming new agent nouns than the suffix -er.

What is an agent noun?

Agents generally have the endings “-er” or “-or.” These suffixes, when added to a root word, mean someone who does something.

Not quite. The word I'm looking for would be used to refer to a person who mirrors others in speech and action. If that definition of mirrorer is used enough, then perhaps an agent noun of mirror cannot exist. In any case, thanks for sharing it here!

I think you mean “mirrorizer” but it’s not an actual word as far as I’m aware that’s in a dictionary. It’s from the verb mirrorize (obsolete; rare according to OED) + the ending -er (where the extra e is dropped). 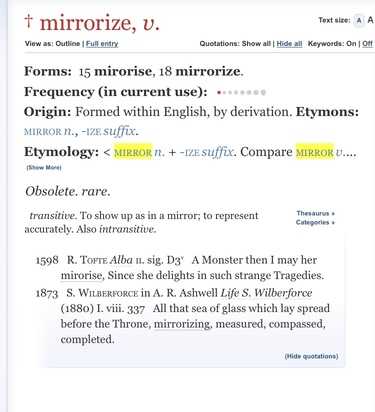 It’s the same with other agent nouns that end with e for example:

74
What’s the rule for adding “-er” vs. “-or” when forming an agent noun from a verb?
4
Non-standard British use of possessive "me"
1
What is the agent noun for verbs ending in -y?