Where does the term "shiv" (a makeshift dagger) actually come from?

Practically everyone has read (or seen in a film or on TV) about a situation in which someone "stuck a shiv" into someone else. The image is of some kind of dagger, and the most common use I have observed for shiv is as a term for the kind of makeshift dagger used by prison inmates.

I use the term dagger because the shiv in this case appears to be a thrusting weapon, not a slashing one. Yet its etymology is not really clear. Etymonline describes it this way:

The American Heritage Dictionary weights in with:

A knife, razor, or other sharp or pointed implement, especially one used as a weapon. [Probably Romani chiv, blade.]

Several other sources plump for the Romani explanation, dating from the early 20th century, but while Collins says the term's origin in British English is the Romani one, it insists that the American term is from 1855-60, although on the subject of actual origin it is strangely mute. This makes me suspect it also favors the Romani origin—but how?

All this seems something of a muddle. Certainly the usages may have sprung up independently, but then there's that "of unknown origin" given by Etymonline, dating it from the 17th century. Can anyone provide a clearer picture?

Side note: I wonder if there could be some kind of line traceable between this term and one meaning of shiver, about which Etymonline says:

When I entertain this term in my mind's eye I see a sharp shard of glass or ceramic that could look very much like a dagger.

Shiv (preferred spelling in US slang) is from chiv or chive in thieves' cant (from British slang). Chiv is from chivomengro (meaning knife in Gypsy or Romani language) according to several sources. Most cant terms are said to be from Anglo-Romani language which has roots in Sanskrit. The word might be related to the Gypsy word churi (meaning knife) and ultimately Sanskrit word छुरी (churī) (meaning knife, dagger).

OED mentions that chiv(e) (n) is from thieve's cant and has the earliest usage from 1673:

Listed below are the sources mentioning chivomengro:

Another cant term which may have come from the Romani is chive 'knife'. This word first noted in 1673 (N.E.D.) is still in use at the present time. The preferred spelling is chive , but it is often given as chivvy , chiv, shiv , or shive. The pronunciation is either 'shiv' (rhyming with 'to live') or 'shivvy'. There is a Gypsy word chivomengro 'knife' whose stem 'chiv' suggests itself as the origin of the underworld chive.

A shiv (from the Romani word chivomengro, or "knife") is a slang term for any sharp or pointed implement used as a weapon. Inmates in prisons around the world make shivs.

From Journal of the Gypsy Lore Society (by The Society):

Some sources say that it is from Gypsy chive meaning 'to stab': 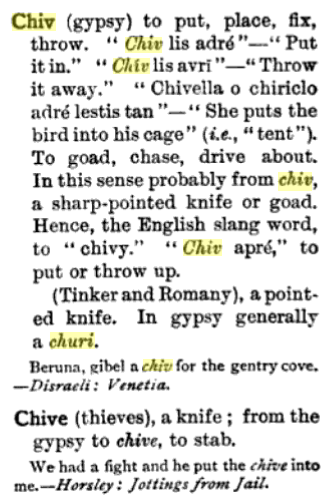 From "A Classical Dictionary of the Vulgar Tongue" by Francis Grose:

Shiv is of Romany origin. It is included by George Borrow in his Romano Lavo-Lil Word-Book of the Romany or English Gypsy Language (1874):

Eric Partridge in his Dictionary of Slang and Unconventional English (3rd edition, 1949) has the following about chive or chiv which are variants of shiv:

Grose refers to A Classical Dictionary of the Vulgar Tongue first published in 1785 where chive or chife is defined as a knife, file or saw. Partridge edited Grose's dictionary and added comments to it. Here is Partridge's addition to chive:

G.B. stands here for George Borrow and brings us back to the Romano Lavo-Lil.

Yet more information is found in Partridge's Dictionary of the Underworld British & American (1949):

It is interesting to note that in numerous languages one of the slang words for knife has also been borrowed from Romany but directly from ćhuri meaning knife in that language. It appears for example in French as chourin, which is now obsolete, or surin, which is still used. Wartburg in his Französisches Etymologisches Wörterbuch has the following remark about it:

Green's Dictionary of Slang appears to support the Romani origin with the earliest usage of chiv from the second half of the 17th century and shiv from the late 19th century:

The Concise New Partridge Dictionary of Slang and Unconventional English suggests a different origin of shiv: