“Put a pin in it” idiom origin?

Does anyone have a definitive origin for the phrase/idiom "Put/stick a pin in it/that" used to mean let's delay, come back to something later?

I searched the archive but didn't see this asked or answered (if I missed it please point me to the correct entry).

Urban Dictionary (sorry) offers a WWII origin of putting the pin back in a grenade so it doesn't explode.

I can easily picture this coming from the tailoring trade (as so many idioms did) where you pin fabric in position before sewing it down.

Multiple sources mention Jane Austen's use of pins to mark edits in her manuscript but I don't know if this was a wide enough practice to coin a phrase.

Wikipedia offers this on the history of the drawing pin or push pin (with some great detail about their effect on woodwork):

The drawing pin was invented in name and as a mass-produced item in what is now the United States in the mid/late 1750s. It was first mentioned in the Oxford English Dictionary in 1759. It was said that the use of the newly invented drawing pin to attach notices to school house doors was making significant contribution to the whittling away of their gothic doors. Modern drawing pins were also found as standard in architects’ drawing boxes in the late 18th century.

Edwin Moore patented the "push-pin" in the US in 1900 and founded the Moore Push-Pin Company. Moore described them as a pin with a handle. Later, in 1903, in Lychen, German clockmaker Johann Kirsten invented flat-headed pins for use with drawings.

Given this, I would say an occurrence of the phrase pre-1750 makes an origin in the sewing trades more likely? There is another occurrence in the wikipedia entry on (standard/straight) pins mentioning their use in marking or pinning together pages of a book so maybe this was a common enough practice to coin the phrase.

EDIT: A usage from 1821 (in a collected volume of columns/correspondence from 1835)

... at the same time, made grand military preparations, not leaving out the cannons. What law they had for these things a day may come, perhaps, for inquiring in a lawful way. At present, we will " stick a pin there." Fasten so much up in your and ...

with quotation marks in the original texts (which suggests to me an early idiomatic use). The same gentleman used the phrase again in 1826:

The sales of sheep, at this one fair (including Appleshaw), must have amounted, this year, to a hundred and twenty or thirty thousand pounds less than last year 1 Stick a pin there, master "PROSPERITY ROBINSON," and turn back to it again ...

with further elaboration of "turn[ing] back to it again" which supports the pin used to mark a place in a book explanation. These occurrences turned up by searching the phrase "stick a pin" (bet 1700-1850) in googlebooks.

In 1859, the book "Nature and Human Nature" by Thomas Chandler Haliburton included the phrase "Stick a pin in it", in a somewhat figurative manner that alludes to keeping something set apart to refer back to in the future.

The Doctor has just said "God has made sunny spots in the heart; why should we exclude the light from them?"

The narrator replies, "Stick a pin in that, Doctor, for it's worth rememberin' as a wise saw."

The passage also suggests an origin of the phrase, related to the preserving of insects by an entomologist, by literally sticking a pin in it.

There may be other origins, but this is the earliest figurative use of the phrase I've found. 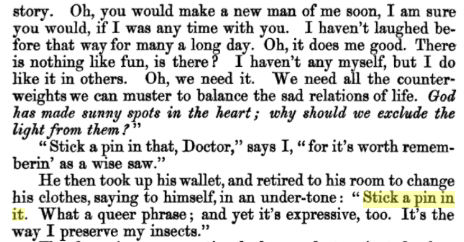 GDoS has the following early usage examples: stick a pin (in) there!

I agree with the comments that it comes from (at least the concept of) pinning it to a board/wall. Before the digital age, researching and investigating required more time and effort so you had to prioritize your ideas. If you had something like a story lead (needing to talk to someone or find the right person to talk with), topic to better understand (a trip to the library), or testing the veracity of someone's story then you might literally or figuratively "pin" it on a wall, board, or mental map. All of these things might be important tasks, but not practical in the moment.

Today, we can easily find more information than we can consume so it might not seem natural to think of having to delay topics, but if you visualize having to physically travel in order to get information, I think it makes a lot more sense.

Not the answer you're looking for? Browse other questions tagged etymology expressions idioms or ask your own question.