I am translating an Italian technical manual, and I'm having problems translating one word in particular: "planaritá". The literal translation of the word is apparently "planarity" but I've never heard of planarity before and from online research it doesn't appear to be a common engineering term for wheel/rail contact.

The direct translation of the relevant section is:

I wonder whether "alignment" would work instead. Is there another more technical/engineering term to describe the relationship between wheel and rail?

I have found This book on the net having seen a reference to the term "Contact Patch" in one or two other searches. It seems to me that "contact patch" might be the technical term you are looking for.

We'll start off with considering your possible suggestion of alignment. Lexico (from Oxford dictionaries) gives:

1 [mass noun] Arrangement in a straight line or in correct relative positions.

‘the tiles had slipped out of alignment’

1.1 [count noun] The route or course of a railway or road.

‘four railways, all on different alignments’

an arrangement in which two or more things are positioned in a straight line or parallel to each other:

Cambridge's wording for this meaning is much better: "straight line or parallel to each other". If you draw a line through each of the four wheels of a vehicle, from the back of the wheel through the middle to the front, then compare these lines with each other, are they all parallel? If so, then they're in alignment. Applying this logic to a wheel/rail interface - as long as the line through the wheel is parallel to the rail, then they're in alignment.

But consider these situations: 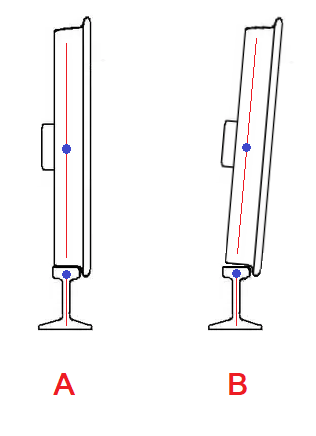 The image is a 2D representation of a 3D situation, but we can see that in both A and B we can see that the line created by running the blue points into and out of your screen will show that the wheel is in alignment with the rail, as the blue lines would be parallel. But while A is clearly the correct contact between the wheel and the rail, B is not. This is because in A the plane of the rail (caused by running the red line into and out of your screen) and the plane of the wheel are the same; in B the rail and the wheel are in different planes.

The quality or condition of being planar

and Cambridge gives us: a page titled "Did you spell it correctly" and some search suggestions for similar spellings or pronunciations.

So "planarity" is clearly not a common word: you hadn't heard of it and neither has the Cambridge dictionary. But it does exist (as shown by Lexico), and it's meaning is easily understood from the word "planar" plus the suffix "ity". As a Chartered Engineer myself (though not directly in the right field for your question) I recognise the word.

So, the word you originally rejected planarity is the word you're looking for, assuming that situation B is the correct type of "incomplete wheel contact" anyway. And given that "planarity" is the literal translation, it would seem likely that that's the case.

Not the answer you're looking for? Browse other questions tagged terminology technical tech-writing or ask your own question.