Word or phrase for the surface appearance of an artwork

My partner teaches college art classes. Commonly she has students exercise (1) describing the brute surface appearance of a work of art, and then separately, (2) giving an interpretation of what the work "means".

Surprisingly her students have a really hard time focusing on part (1) without slipping into interpretive aspects. In the hope of helping them distinguish the categories, she spends a lot of time working and talking about part (1). But it's a little awkward because neither of us can come up with a concise term-of-art that means that thing.

Example usage: "Please describe this artwork's _______, without giving an interpretation."

What would be the best word or short phrase for this classification?

In photo metadata we make a distinction between the Photo Description, and the Photo Caption. So Description would be something like "red voyageur canoe proceeding from upper left to lower right through rapids with chaotic currents. Far shore is red veined grey granite, with dense spruce. Where the caption may be, "Shooting Otter Rapids on the Churchill, June 2008" Caption isn't the same as interpretation.

Similarly I may describe 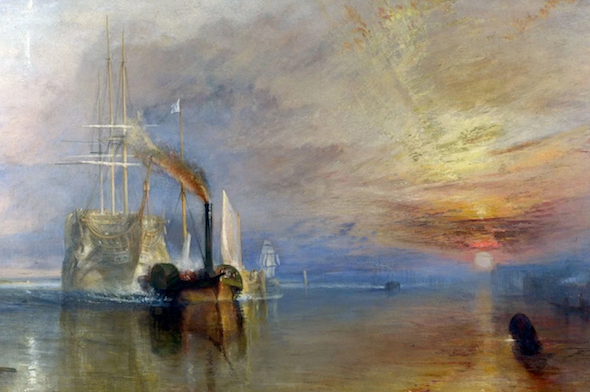 The site I snitched this from describes it as:

"Turner paints the veteran warship, hero of the battle of Trafalgar, as a pale and ghostly mass looming against a rich, panoramic sunset. It has a sense of latent power still not quite eclipsed by the raw mechanical energy of the flaming and smoking steam tug. Here we see Turner's interest in the new as well respect for what is past. This may be an elegy to what is gone, but is also an affirmation of the continuing energy, power and modernity of Victorian England."

But describing it for computer or the blind:

Picture lower left: An early coal fired black tug is pulling a pale large three masted sailboat. The sea is nearly flat. Picture lower right: The sun is a dark orange and grey patch near the horizon nearly obscured behind smoke and cloud. Extreme lower right is a black object in the foreground. Upper half of the image is a patchwork sky of smoke and high overcast.

Style is impressionistic, with soft contrast and little fine detail.

Depending on your class, you may want more use of style descriptors, brushwork, glazes, underpainting.

I would suggest composition:

5
What’s the word to describe that I ——— your artwork?
0
appearance phrase question
2
Phrase for targeting surface level problems?
2
Word for Excessive Care about Appearance?
0
A word for defining inspirational artwork
1
Word for adding material to a rough surface until a smooth surface is formed?
3
a word/phrase for someone who appears bad on the surface but is actually good (in terms of character)
3
Word or phrase for fake appearance or posturing
1
Word for buying custom made artwork
1
A word for something just within/under the surface