Origin of "come in handy"

Where did the phrase "to come in handy" originate, and what exactly does it mean?

My understanding is that it essentially means to be useful. Is this correct?

As far as origins, I have no idea. Etymonline did not seem to know, either.

Meaning "conveniently accessible" is from 1640s.

To come in handy means something will be handy or useful in the near future, that it will become handy.

The earliest verifiable examples I found in Google Books are both from 1843.

First, in a "Weekly Journal of Gardening" column of The Gardener and Practical Florist:

CELERY, as we always recommend in small gardens, should be planted out at various seasons, and if there be any left in the seed bed, another row will come in handy. Earth up that which is advancing. LETTUCES in the seed bed may be thinned, and those taken out may be planted.
July 15, 1843.

Second, in Tales of the Colonies, or, The Adventures of an Emigrant, Volume 2:

"What have we got here ? a pair of handcuffs ; ah ! these come in handy ; the bushranger won't want handcuffs any more, but they'll do for his mate."

We can also find some slightly early uses of the similar to come handy. It was once used similarly and as often to come in handy, but lately has become rarer.

An October 1824 The London Magazine prints a letter from summer 1821:

please your oner,
hoping your oner wont be displeasd at my boldness and I send a little basket of eggs-good fresh eggs-and they were lade by the little black hen that's three yeer ould come Michaelmas eve the day that I send home your oner's shute— and the times are very hard intirely — intirely — plase your oner from
your oner's sarvent to comand,
Timotheus Kinnealy.
the woman hopes the eggs wil come handy to the young mistris out of her confinement. — tuseday mornin.

It hails from the 1800s (per Dictionary.com) and it means:

It can be explicated come in to the situation and be handy, where handy derives from hand, in the sense of right-hand man - useful.

Here is the Ngram graph of its usage:

This led me to an 1840 usage of the expression: 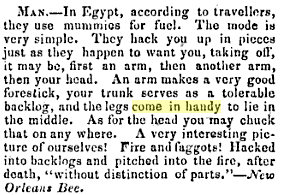 It looks like it evolved from the Middle English hende, which carried both the meaning of "readily accessible" and "useful" as well as a host of other definitions, which itself rose out of the Old English/High German gehende, which, interestingly enough has more or less the same definition as "handy" does today. I just wrote a paper on it, but I wasn't able to find any confirmation, so this may as well just be treated as food for thought or one of many possibilities. As it happens, hende was used in Middle English literature as of the late 13th/early 14th century, so the evolution into "handy" could have happened at any point between its own recorded uses and then.

Unlike the other answers, I'd suggest that this idiom is a composite.

Handy needs no explanation in its sense of "useful" or "convenient".

To come in is being used idiomatically in the sense of "become" or "eventually be", perhaps by connection to other senses in which come in is used to mean "arrive" (like come in last in a race, come in dead to a morgue, etc.)

When declaring that something will come in handy, it usually means that the thing is recognised to be useful in general, but perhaps not yet for a specific purpose (or not for a purpose immediately occurring), so it will be useful only later.

Often one could say that something might come in handy, to emphasise uncertainty about the later application.

When one refers retrospectively to something that came in handy, it might be to express that it's usefulness or convenience wasn't obvious ahead of time.

In his answer Daniel traces the early records of the whole phrase “to come in handy”.

It is a simple collocation of “to come in” and “handy”

[All quotes from the OED]

Handy 2. a. Made or done with [or by] the hands; involving manual labour or skill. Now: spec. designating minor domestic repairs or maintenance, such as might be carried out by a handyman. Cf. handiwork n., handicraft n.

1535 Bible (Coverdale) Hag. i. B Vpon men and vpon catell, yee and vpon all handy laboure. [Upon men and cattle, and indeed upon all manual labour] (my translation)

And “associated with the hands”:

The earliest use is only approximately 10 years earlier:

1. a. Clever with the hands, dexterous; skilled at a variety of (manual) tasks; able and ready †to do something or turn one's hand to anything. Cf. handyman n.

By the early 17th century, “hand” had already developed a use to indicate the convenience of having that skill and the readiness.

1616 R. Bernard Dauids Musick To Rdr. sig. A3v To propose what we haue..in that method and forme, which may be best & most handy to the readers vse.

This then takes us to to come in as a phrasal verb:

16. intransitive. To prove to have a specified positive quality.

a. With adverb or prepositional phrase, as usefully, well, etc.

1733 T. Stackhouse New Hist. Bible I. vi. iv. 909/1 His Father's losing his Eye-sight, by the hot Dung of Swallows, had been a sad Family-accident, had not the Gall of the Fish come in opportunely to remedy it.

(The OED's earliest use of “to come in handy/useful" as a whole phrase in the OED is a plagiarism/reprint 30 years later of that given by Daniel above.)

A useful implement close at hand is how I would understand something handy. Most times we have to draw inference from precedents and usage rather than hard and fast definitions.

Early use of the phrase seems to indicate such an intention on the part of the authors, as well.

Sometimes, though, come in handy may have been used in one or the other of the meanings alone: useful or accessible.