Correct word for a 5-part piece of art?

As I am wanting to buy one of these, I'd like to know the actual name of it. 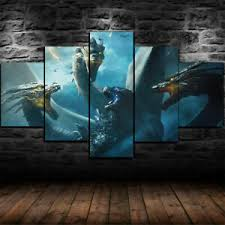 The name for a 3-part art piece seems to be "triptych" (translated via google from "triptychon").

Through some googleing I found "pentaptych" which doesn't seem to be correct as "pentateuch" is always suggested, but that seems to be specifically for the 5 books of Moses.

So the question remains: What is the right name for pieces of art that consist of 5 parts?

The right word is indeed pentaptych.

The ptych part is directly from the Greek πτυχή=fold — usually these things fold on hinges. Penta- is the combining form for "five" in Greek.

There are a number of similar words: diptych (two parts); triptych; tetraptych; pentaptych; hexaptych; heptaptych, and so on. The hypernym is polyptych, (poly=many).

OED does include pentaptych, but marks it as "rare", so it's not really surprising that Google wants to search for Pentateuch instead.

OED also says that the pronunciation is "pentaptic", but I've never heard anything but /-tʃ/ for any of these words, and "pentaptitch" doesn't really show that the "pt" belong together from the Greek πτ. I would prefer a pronunciation of /ˈpɛntəˌtɪtʃ/ "pentatitch" (treating pt- as it is in pterasaur).

I think Polyptych is the more general word … Looking from there you can find names for some specific number of pieces: https://en.wikipedia.org/wiki/Polyptych

Pentaptych is the one with five panels or pieces, it seems…

2
Word for cheap manufactured art
19
A word that describes something that has been given a name
4
What is the blurring of pixels for fidelity called?
12
Word for a ‘vignette’ on a specific topic within a book
2
Word for what a piece of art is commenting on being reflected in the reaction to that art
0
What is the word for a piece of art depicting several people?
8
Word meaning a piece of fiction about a work of art
1
What is it called when someone is utterly absorbed in a piece of art?
0
Is there a name for phrases like "faint of heart" or "fleet of foot"?