How is 'fixture' a count-noun when 'furniture' is a mass noun?

Fixture is defined in the LEXICO Dictionary as:

A piece of equipment or furniture which is fixed in position in a building or vehicle.

Here're a couple examples from the dictionary:

Cathedral ceilings, antique light fixtures and furniture that looked as though it had come straight from the twenties.

During assembly, the glass is first positioned in a fixture with several sensors around the sunroof.

So, fixture seems to be a count-noun, albeit usually used in the plural.

But as its definition indicates, fixture is similar in meaning to such mass nouns as equipment and furniture in that it encompasses different objects with different shapes and functions that can be subsumed under a single category. And I thought this kind of special meaning was the very reason for treating equipment and furniture as a mass noun, so I was wondering how fixture is treated as not a mass noun but a count noun.

Is there anything with fixture that distinguishes it from the equipment/ furniture types of mass nouns that makes it a count noun?

On pages 214-5 of the Google book "The Oxford Reference Guide to English Morphology" the authors Laurie Bauer, Rochelle Lieber, and Ingo Plag classify "fixture" to be a word:

"with lexicalized meanings (that) are likelier than non-lexicalized forms to have only the count reading."

Here is an image of what I found in Google Books 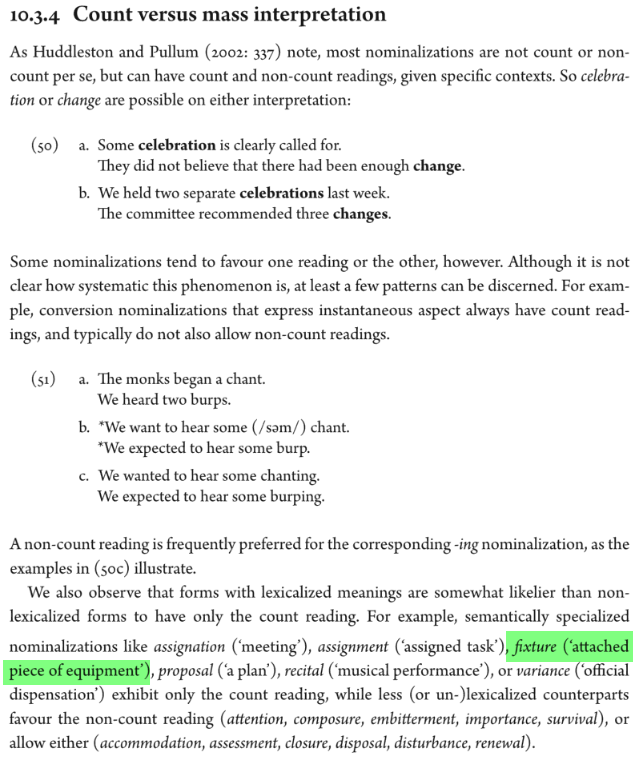 "treated as undifferentiated (milk, oxygen), abstractions (truth), or aggregates of items, either uniform (rice) or variable (furniture) whose boundaries are not conceptually salient."

Here is an image from pages 124-5 of the same text in Google Books: 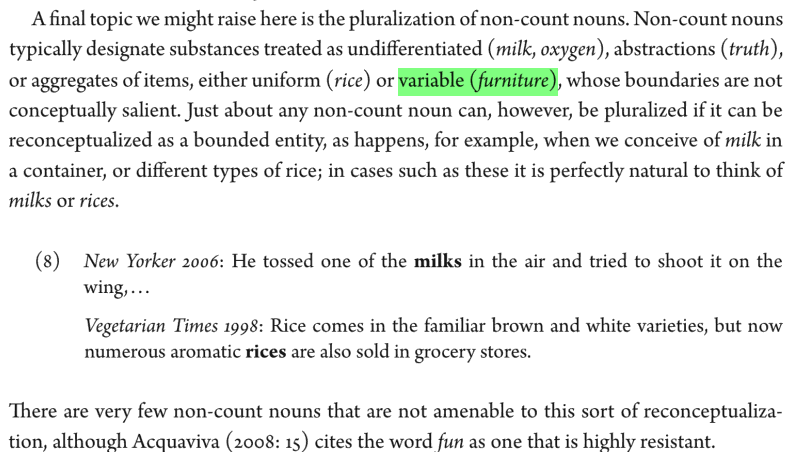 Probably influenced by Fixstar "fixed star" (cp Ger Fixstern; En fixpoint vs floating point). A single fixed star is of course useless. The mythological importance of this should not be understated, if *ster- (cp e.g. Ger starr "rigid") pretty much means fixed for a couple milenia now, though it can't be conclusively linked to *Hestr- "star".

Other than that, French shows a lot of plural usage for furnitures as well as denoting deverbal abstracta, which might be confusing if they elide the plural inflection regularly, as much as article inflection in colloquial speach (l'furtniture[s]), though I I'm not sure that was the case when English borrowed it from Middle French.