Why is the apostrophe positioned differently in “ones' complement” than “two's complement”? [duplicate]

There is a concept in computer science which deals with how to demonstrate negative binary numbers. Two methods for achieving this goal are ones' complement and two's complement.

Since I got acquainted with these methods, this question never stops coming to my mind that why the apostrophe is placed differently in ones' vs two's? I also saw many articles using one's instead. Even Google suggests that I might be mistaken! 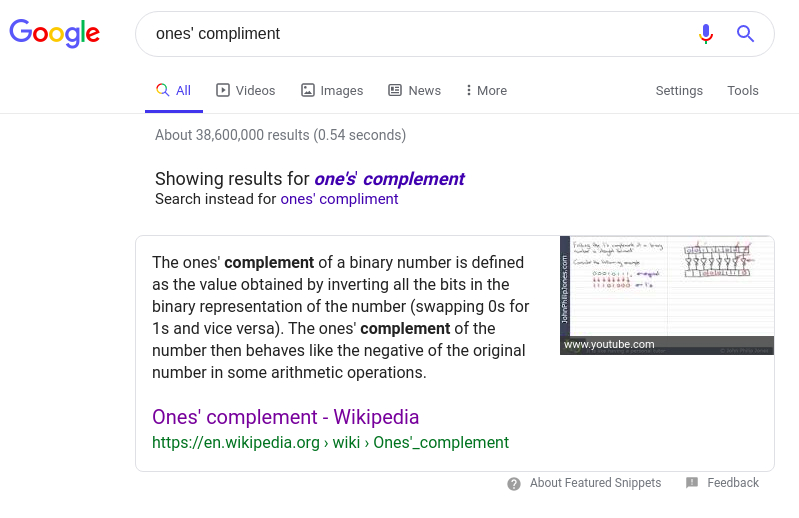 So I want to resolve this issue once and for all. Is it a stylistic preference? What causes this difference? And please provide more examples of similar usage.

My edits indicated with [brackets].

Use an apostrophe + "s" ('s) to show that one person/thing owns or is a member of something.

Even if the name ends in "s," it's still correct to add another "'s" to create the possessive form. It is also acceptable to add only an apostrophe to the end of singular nouns that end in "s" to make them possessive. In this case, you can show possession for Ross either way:

It makes no difference whether the item owned is singular or plural. We use "Ross's" to say that the room (singular) is his and that the sports teams (plural) are his.

Use an apostrophe after the "s" at the end of a plural noun to show possession.

It is not necessary to add another "s" to the end of a possessive plural noun.

If a plural noun does not end in "s," add an apostrophe + "s" to create the possessive form.

Remember, a possessive noun [should have] an apostrophe and an "s" at the end. [Alternatively,] if there's already an "s" there, you can just add the apostrophe. If there's no "s," you have to add both - first the apostrophe, and then the "s."

Not the answer you're looking for? Browse other questions tagged possessives apostrophe saxon-genitive or ask your own question.

4
Apostrophe difference (Ones' and Two's Complement)