What is the structure in this question? “it's difficult knowing which one to choose.”

It's difficult knowing which one to choose.

Can anyone explain to me why "knowing" is in ing-form?
I did some research but couldn't find the answer.

This sentence is grammatical, but it's complex, and has been twisted about a bit.

If is difficult is the main verb phrase, what's it's subject? Well, everything else in the sentence.

(Except it. The it is a meaningless dummy, introduced by the syntactic rule of Extraposition.)

Knowing which one to pick is also a clause, a gerund clause with knowing as the gerund main verb of the clause. But every English clause needs an English subject, so whose knowing are we talking about? It's not clear.

Anybody at all, everybody, somebody, whoever you like. It's indefinite who the subject is (except it does have to be a Who, not a What, because that's required for the subject of know), and since it's not there, we just don't know. But we can tell that the subject is some indefinite human, and not somebody mentioned in the conversation, so we'll just call it Indef, which of course, is not pronounced. Like apostrophes.

So the subject of is difficult is the clause

and together the sentence is pronounced

This is the sentence that's left when you unwind Extraposition. That moves a heavy subject like a gerund clause to the end of the sentence where it's easier to process, and leaves behind a dummy It (normally contracted to It's when the predicate is an adjective, as here) behind to fool us into thinking there's a subject still there so we can get to the verb fast. There are a lot of rules in English that do this, in various ways to various kinds of construction, but always in order to put heavy stuff at the end of the sentence.

Somebody (indefinite) is to choose something (also indefinite, so it may be somebody instead) from a limited set of things (or people). That's the sense of which one instead of what, which could be plural and isn't limited in scope.

Wh-infinitives are very restricted and have extremely peculiar syntax. The subject of choose is Indef, but the object is which one, moved to the front as a relative pronoun. One in which one is the indefinite singular pronoun, standing for some noun that is understood in the discourse. We don't know what (or who) is being chosen, nor by whom, but the speaker is relying on the addressee knowing what noun one stands for. This is not "indefinite" in the same logical sense -- we still don't know which one, but we know what kind of ones we're talking about.

Just an addendum to John Lawler's excellent answer: your sentence

[1] It's difficult knowing which one to choose.

is arguably only marginally idiomatic in its intended meaning, which I take to be epistemological ('in this case one is unsure which one to choose') rather than emotive ('the fact that one knows which one to choose exerts an emotional toll on one.'). If the surrounding context makes it clear that it is meant emotively, then it is fully acceptable. However, the emotive reading on the whole seems unlikely for this sentence, and it would require very special context (Lambie gave one in the comments to the original question).

[2] It's difficult to know which one to choose.

In this form, both are idiomatic.

(a) Extraposition of gerund-participial subjects

Extraposition can apply with gerund-participials as well as content clauses and infinitivals:

We did not include this under the central case of extraposition because gerund-participials extrapose less readily and generally than content clauses and infinitivals. Compare, for example:

Here the extraposed infinitivals are impeccable, but the gerund-participials are at best very marginal, though the basic versions are quite unproblematic (Telling my parents was stupid; Calling in the police would make things worse). Gerund-participials with an overt subject, especially a non-pronominal one, are particularly resistant to extraposition: Kim and Pat getting married had taken us all by surprise, but not *It had taken us all by surprise Kim and Pat getting married. Note that gerund-participials differ from infinitivals in that they can undergo subject-auxiliary inversion (cf. Will getting Ed to agree to our proposal be a problem?), so extraposition is not obligatory in this context.21 Gerund-participials in complement function are the most NP-like of subordinate clauses, and the fact that they are less amenable to extraposition than the other subordinate clause categories is a further manifestation of this. 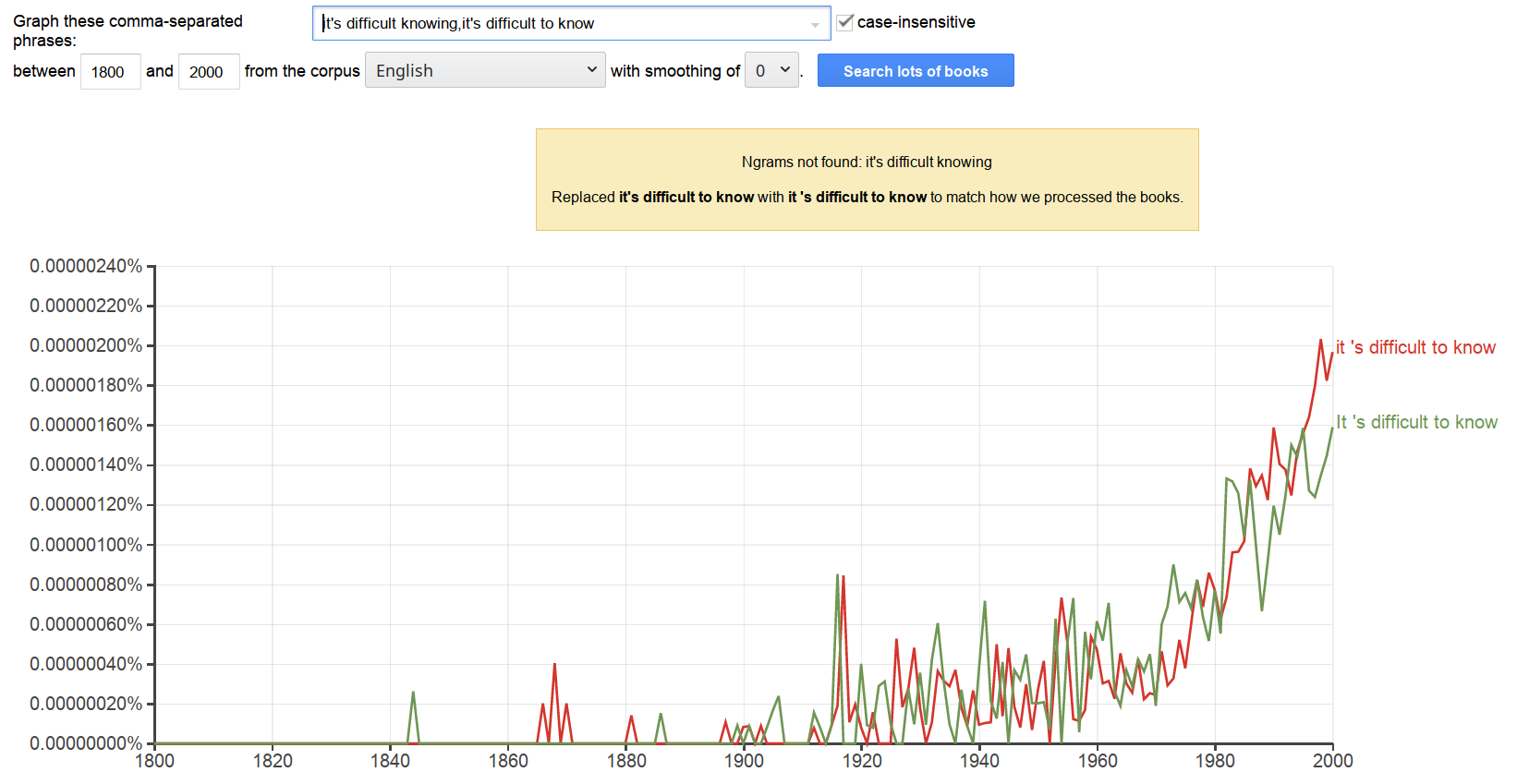 The same result is obtained if one searches the Corpus of Contemporary American English (COCA) or the British National Corpus (BNC).

If one searches google books for "it's difficult knowing," one gets hits like this:

Clearly, in these examples, the phrase means that knowing these things exerts an emotional toll on the knower, which is different from the more epistemological meaning which it is supposed to have in your sentence.

True, google books does return a few hits where the phrase is used with the same meaning as in your sentence:

But if you search for it's difficult to know, you will see that that phrase is much more common.

Not the answer you're looking for? Browse other questions tagged grammar word-choice or ask your own question.

2
What is “it” in the following sentence: It is clear that Bob likes doughnuts

5
“choose from” vs “choose out of” vs “choose among”
1
When it comes to + N / V ing
2
Why exactly is this sentence the way it is?
4
Starting a sentence with “One question…” and then stating the question?