What does “There’s nothing bulldog about Britain” mean?

I came across the phrase “There’s nothing bulldog about Britain hovering somewhere in the mid-Atlantic,” in the following sentence of New York Times (December 12) article, titled “The British Euro Farce” commenting on British PM Cameron’s veto of Europe-bolstering treaty change:

“After uncertain mumblings, the deputy prime minister, Nick Clegg, managed to reach beyond this theater to something approaching strategic reflection. Declaring himself “bitterly disappointed” at Cameron’s decision, he said: “There’s nothing bulldog about Britain hovering somewhere in the mid-Atlantic, not standing tall in Europe, not being taken seriously in Washington.”

From the preceding line of the article:

“Since Cameron’s “No,” there’s been much chatter about the return of Britain’s “bulldog spirit.” Self-delusion is a lingering attribute of former imperial nations adjusting to a lesser reality,”

I can interpret “bulldog” as “British-ness i.e., British persistence” or “going UK’s own way,” but I’m not sure.

Can I extend this analogy to “There’s nothing shepherd (bear, Uncle Sam) about German (Russia, America) behaving ..,”?

The figurative usage was probably around much earlier, but here's a reference just after WW1 to the British bulldog spirit carrying us through to victory, though it really caught on during/after WW2 when we survived The Blitz. And, of course, John Bull has been a personification of England/Britain since C18.

Bulldogs are (feasibly incorrectly) assumed to be named for their role in bull baiting. It doesn't matter what the historical truth might be - Brits like (certainly used to like) the imagery. The key characteristics being alluded to are persistence, fortitude, courage, etc.

Clegg probably used the term loosely to imply Britain wasn't living up to its cultural heritage, with maybe something of a crude appeal to patriotism. Just a politician's sound bite, IMHO.

I can't really cite the fact that Brits sometimes call the French "frogs" as part of the same pattern, but before WW2 Brits often used the Russian bear to refer to the country. I'm sure there are other animal/country conflations, but I can't think of one for Germany - as of WW2 we called them the German steamroller.

There's this use of Enter the dragon 'to save the euro’ referencing China, but it really depends on the pre-existing phrase allowing "dragon" to stand in for "China" in this one-off usage.

The bulldog has long been associated with Britain. It is a British breed; often seen accompanying the figure of "John Bull". During World War 2 that was cemented, partly because of the stubborn, determined spirit the populace had to adopt, and partly because of Churchill's physical resemblance to the dog. 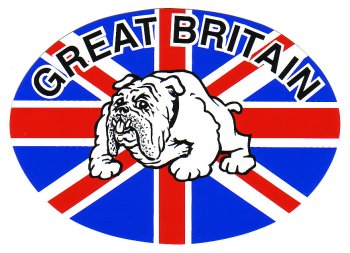 Indeed, a bulldog named "Churchill" is the mascot of a British insurance company. 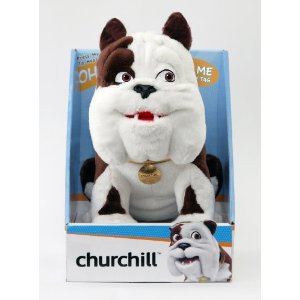 But, less history, more English. The term "Bulldog Spirit" became idiomatic from World War II onwards, and in this phrase, the word "bulldog" takes the role of an adjective.

It follows from that that you can write "there's nothing bulldog about...", continuing to use "bulldog" as an adjective.

I've never heard the term "Bulldog Spirit" before, but apparently it's fashionable:

The term “Bulldog spirit” has been used a lot recently by a number of UK politicians including David Cameron in relation to Britain’s stance against the proposed EU treaty changes. (source: politics.ie)

As for why it's a "bulldog" spirit and not some other kind, it's probably in reference to the bulldog's reputation as being stubborn or tenacious:

The phrase "stubborn as a Bulldog" may derive from observing an agitated Bulldog. (source: Wikipedia)

If that's the case, I don't think "bulldog" is specifically referring to Britain, but to the personality trait. So extending the animal analogy to other countries probably doesn't fit.