The expression “shotgun wedding/marriage”, as described in the following link, is an American English one.

Of American-English origin, the phrases shotgun wedding and shotgun marriage denote a wedding into which one or both partners are forced, usually because the woman is pregnant.

Its earliest usage instances appear to date from the second half of the 19th century from American papers such as:

The Cincinnati Enquirer (Cincinnati, Ohio) of Monday 15th April 1872 and

The Telegraph and Messenger (Macon, Georgia) of Tuesday 21st August 1883.

Also its metaphoric usage appears to have been first used in AmE:

Those phrases came to also denote any forced union. The following article from the Editorial Page of the San Francisco Examiner (San Francisco, California) of Friday 1st March 1929 illustrates the transition to this generic sense.

I’d assume that in the 19th century this kind of marriages were celebrated in England too, and if so, what were they called in BrE?

The British National Corpus has a large number of samples of British English through the mid-1990s. Here are the three results that come up for shotgun wedding.

. Of course somebody, Who Shall Be Nameless, would bring up the subject of Burns-And-You-Know-What, and how many of his children were born on The Wrong Side Of The Blanket, What Right Had We to look down on Brown Owl for her shotgun wedding when we were all supposed to look up to Rabbie Burns as Our Big Hero? (True Confessions and New Cliches. Lochhead, Liz. Edinburgh, Polygon Books, 1985.)

There was some speculation about alternatives, with some canvassing the claims of Derby and Salisbury and others imploring Lloyd George to take over the leadership and unite the parties in a shotgun wedding, but Austen's claims were undeniable. (John Ramsden, The Age of Balfour and Baldwin 1902-1940. Longman Group UK, 1978.)

In this sense May 1968 was the price de Gaulle paid for his attempt at a shotgun wedding between French industry and the twentieth century. (John Harrison, Andrew Glyn, and Philip Armstrong. Capitalism Since 1945. Oxford: Blackwell, 1991.)

Notably, the latter two examples use shotgun wedding figuratively in political contexts to describe forcing together two disparate groups for the sake of appearance or political exigence. The fact that they're used, in a way that presumes familiarity by the audience, suggests the phrase is known and used among British English speakers. The Hansard Corpus, a corpus of British parliamentary records from 1803 to 2005, features the usage several times starting in the 1950s:

We have to suffer or enjoy sharing the service with Northern Ireland; it is a marriage of convenience, or perhaps a shotgun wedding, but we should like a divorce from Northern Ireland as quickly as possible (23 May 1957, House of Commons, Mr. George Chetwynd)

The corpus has 29 results total, and the usage seems about equally common from the 1960s onward.

Historically, the term knobstick wedding was used in British English, though the term is now obsolete. From Wikipedia:

A knobstick wedding is the forced marriage of a pregnant single woman with the man known or believed to be the father. It derives its name from the staves of office carried by the church wardens whose presence was intended to ensure that the ceremony took place. The practice and the term were most prevalent in the United Kingdom in the 18th century.

Here one could experience the blows of the knobstick if this forced nuptial covenant was ignored.

knobstick wedding n. now historical; a wedding forced on a couple by parish officials when the woman is pregnant (typically to limit the number of claims on the poor rate for children born out of wedlock)

As in: (same citation)

1826 Bristol Mercury 20 March This was a forced marriage, or, as it is vulgarly called, ‘a knob-stick wedding’.

Pity, Craig Philips answer has been deleted. It was he who mentioned that the British English expression was featured in the popular BBC quiz show, QI.

The QI episode, which mentions knobstick weddings is to be found in Series K, episode 4, Knits & Knots, broadcast in 2013, and hosted by Stephen Fry.

Stephen Fry: If you want to tie the knot at a knobstick wedding, what do you need?

A knobstick is a type of wooden club. Now, if a woman was unmarried and had a baby that baby was said to be on the parish. And the parish paid for workhouses and the parish had to pay for the babies, and they didn't like that. So, in the smaller villages where they knew who the father was, they would force the marriage by threatening them with a knobstick. And that was what a knobstick marriage was. It was an enforced marriage because the moment a man marries a woman he is responsible for the baby and the wife. Whereas if an unmarried woman was in the parish, the parish was. 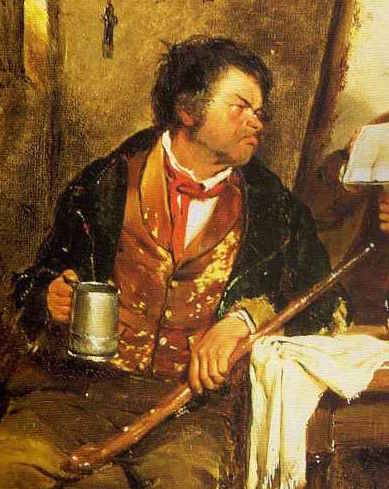 Detail from The Ryans and Dwyers, Calumniated Men by Erskine Nicol, 1856

The knobstick in Ireland, called Blackthorn or in Irish a camóg (crooked stick), buinneán (sapling), or shillelagh, was used as a weapon of defence since the 12th century. Its popularity continued until it reached a peak in the late 18th and early 19th century when Irish gangs (factions), and sometimes even women, fought over political or religious differences, feuds, land rights, evictions and unpaid debts. Fascinating documentary on YouTube, in Irish and English, Na Chéad Fight Clubs

Not the answer you're looking for? Browse other questions tagged etymology expressions american-english british-english or ask your own question.