Here is a sentence that I wrote for an academic paper:

... the provision of longer benefit durations in regions of high unemployment creates long-term EI dependency among seasonal workers, which then results in persistent high levels of unemployment in those regions.

Question: Which phrasing is the most idiomatic (correct usage)? My research tells me I should go with C (but my research is based on the graph, google hits, and reading some of the lines on those hits). However, google hits for all three options are similar in number: around 130.

Let's start with the definition: according to Cambridge, "persistent" (adj) means

lasting for a long time or difficult to get rid of

My original phrasing was option A, "persistent levels of unemployment", which turned out to be very unpopular/uncommon. "Level" is like a scale ranging from low to high. I wonder if that is the problem: "persistent" and "level" does not work together.

In google news, there are only

Simply looking up google all reveals around 130 entries for all of the above options (google returns around 10,300 entries, but if you click page 15 or so, you will see google revises its estimate to around 130 entries). Provided is an ngram for comparison. One term that is way up higher than all three is just "persistent unemployment" (not in image). I wonder why the green (A) and the red (B) line cross like that. 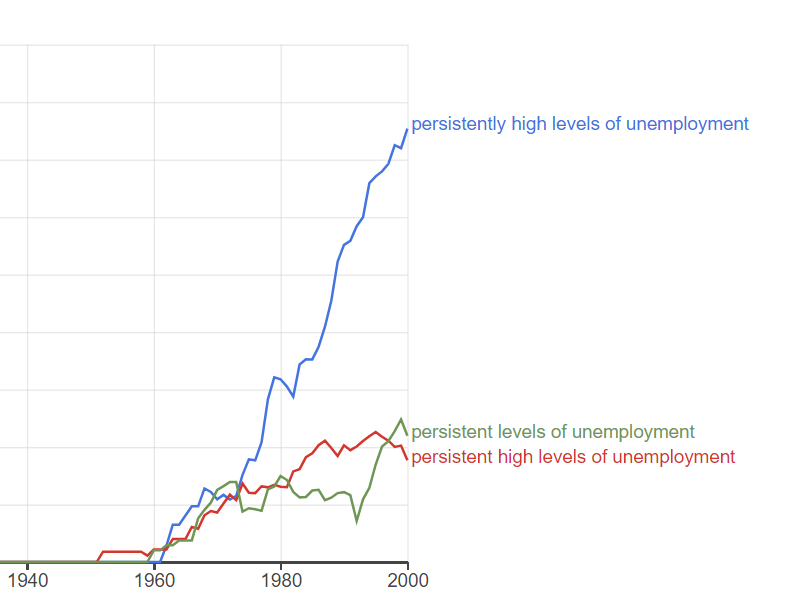 Persistent can be employed adjectivally or adverbially.

Used as an adjective, qualifying a noun it would not take the ...ly suffix. She is suffering from a persistent cough.

Where it qualifies a verb, or an adjective, its adverbial form with the ...ly suffix is employed. He persistently argued the point or The restaurant provided persistently good food. Or, our example, The country endured persistently high levels of unemployment.

When one sees high levels, there is an automatic presumption of alternative bins that include low levels and medium levels, which together form a set. Bin labels become constituent nouns, and can take adjectives as modifiers.

In the case of persistent and persistently, they don't perfectly map the same semantics. Persistent has a considerably broader range of senses than does persistently, and here the adverb feels awkward. The meaning of stubbornly resisting attempts to remediate isn't really covered by the adverb, but is a common use of the adjective.

So I parse the phrase as [persistent [high levels]][of unemployment].

Note that persistent levels of high unemployment isn't quite the same in that it doesn't create the set of high/medium/low levels the way persistent high levels does.

Don't ignore any persistent "funny noises" as they can be the precursor of trouble. (jaguarforums.com)[https://www.jaguarforums.com/forum/xj-xj6-xj8-xjr-x350-x358-28/recommended-maintenance-schedule-04-xjr-42567/)

Residents of the city complained of a persistent “funny smell” after the incident. https://ecology.iww.org/node/965

I'd say persistent, as it is a characteristic of unemployment. Persistently, to my ear, sounds like an action taken by unemployment.

9
"High-schooler" vs. "high schooler"
0
In British English, do you say "in high tide" or "at high tide"?
0
"high-quality" vs. "quality"
1
"Underclassman" vs. "upperclassman" for juniors in high school/college
3
usage of "high end"
2
'Pomp' in 'dressed in white English pomp'
3
Being a persistent or persevering learner?
1
High/low accuracy
0
Is it correct to say that similar groups show high levels of "stereotypicity/stereotypicality"?