Possible Duplicate:
Is there an accepted rule for naming all of our various distant relatives (Kinship Terms)?

My relationship to my cousin's dad is nephew-uncle.

My relationship to my cousin is cousin-cousin.

What is my relationship to my cousin's child? Is it still cousin-cousin?

It is "cousin once removed". 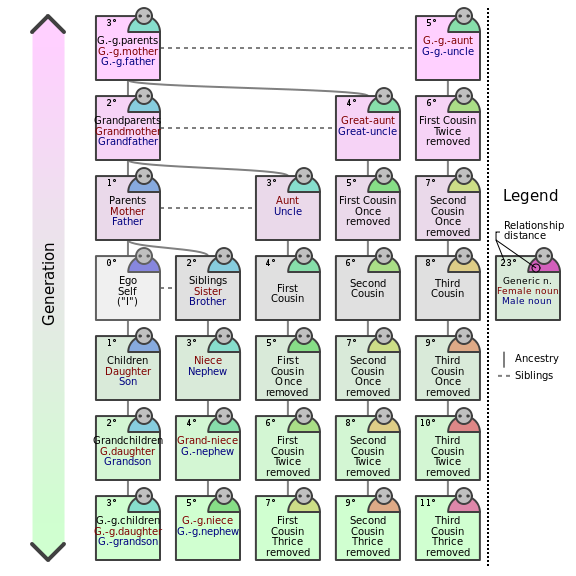 To summarize, what you do is, you take whatever relation you are to the person in his direct ancestry of the same generation as you, and that's the "base" of the relationship; then, however many generations you had to move to get to 'your' generation, that's how far removed he is.

Note that, as pointed out by AShelly, this process is only appropriate for figuring out people below you in the ancestral tree; the earlier-generation individual is the basis of the relation definition.

Well, you would call this person your cousin once removed, and they would call you the same thing, as per this Wikipedia chart.

Not the answer you're looking for? Browse other questions tagged word-choice kinship-terms or ask your own question.

20
Is there an accepted rule for naming all of our various distant relatives (kinship terms)?

20
Is there an accepted rule for naming all of our various distant relatives (kinship terms)?
1
Is there a word for my relation to ex-wife's child?
13
Is the “female” in “female cousin” redundant here?
1
Your parent's cousin is your first cousin once removed, but is it common to call them aunt/uncle instead?
2
Stepfamily, Cousins and Other Ancestries
0
Kinship question regarding 1st cousin family
6
What’s the name for Gary and Harry’s blood relationship?