Where does the expression "triple-A" come from?

The term "AAA" or "triple-A" is a term mainly used nowadays in the video game industry, according to Wikipedia,

... for video games produced and distributed by a mid-sized or major publisher, typically having higher development and marketing budgets.

The same article states that it

... began to be used in the late 1990s, when some development companies started using the expression at gaming conventions in the US.

Nonetheless, the term "AAA", in the sense of something of superior quality, seems to be older. This is a Calvin & Hobbes strip (September 9, 1987) where they travel to the past instead of to the future as they intended:

(I don't even picture Watterson playing or knowing about video games.)

I also found this definition at Cambridge Dictionary:

relating to a government, company, etc. that is considered to be one of the safest to lend money to:

The company is virtually debt-free and is one of a handful of firms with a top-tier, triple-A credit rating.

So, how old is this expression and how did it originate?

The earliest usage of this rating that I’m aware of was by Moody’s in its bond-rating books from the first decade of the twentieth century. (For example, Moody’s Analysis of Railroad Investments 1909.) Its highest bond rating was (and still is) Aaa. Its competitors spelled their highest rating AAA.

A possible reason to use multiple letters in the late 19th century was so that they could be transmitted quickly by telegraph, although some systems used a combination of letters and numbers. Some nineteenth-century directories come with keys of abbreviations to use over the telegraph for fast transmissions—not published ratings, but substitutions for telegraph operators to be able to type more quickly in Morse code, such as X for excellent credit and XA for high. A more verbose version can be seen starting on page 90 of this book. “Lot” is code for high credit, “Noah” for good credit, “Pharaoh” for fair credit, “Abel” for no credit. and “MASSER” for “Come here at once, we fear an absconding by”. It was the original compression algorithm for telecommunications.

Since 1946, the second-highest level of baseball in North America (after the major leagues) has been called AAA. A number of minor leagues wanted to invent a new term to designate themselves as better than the two levels that had previously existed, which were reorganized as A, AA and AAA. A similar system is used by the US Department of Agriculture for eggs (although the grades are AA, A and B). Tbere are also AAA batteries, although these designate size and voltage rather than quality.

You can think of this as a form of grade inflation. the ratings agencies didn’t want to scare buyers off by giving a grade of C or D (considered mediocre to bad in school) to what was supposed to be an investment-grade bond or a safe and healthy, but not pretty, egg, so they invented ratings higher than A. (Teachers would adopt a different system: A-, A, A+, sometimes A++.)

As a result, A is almost never the highest mark in a grading system. It usually comes to designate something good, and then at least one grade above it gets added for superlatively good. Sometimes this is A+, AA or A1. However, if there is an AAA rating, it is always the highest. Some gaming magazines from the ’90s gave games letter ratings, and these were notorious for being inflated, which might help explain why the industry settled on a superlative much-better-than-A. A+, five-star, 100% or 10 were all ratings given out by some gaming publications, but to the best of my knowledge, no one was handing out AAA, AA or BAA game ratings that could be confused with this usage. People might also have wanted to avoid a mix-up with the slang phrase, “bring my A-game.”

Another use of “AAA” was that customers used to look up businesses in a telephone directory that listed all the businesses of each type, alphabetically. Naming your business AAA was therefore the equivalent of getting the top hit on a Google search.

The comic strip you quote is referring to something else entirely: the road maps sold by the American Automobile Association.

Actually, the term 'AAA' for superior quality came from the bond market; since the nineteenth century, AAA has been the highest credit rating for a financial instrument. I would be suspicious of Wikipedia's claim that it is 'mainly used in video games'; there will probably be an 'AAA Plumbers' and an 'AAA Driving Instructors' in your neighbourhood, dating from the time when the listings a prospective customer consulted were in the alphabetically-ordered phone book rather than ranked by Google algorithm.

But you have also misunderstood Calvin; the American Automobile Association published the most reliable road maps of the United States (or at least the most relied-on) for much of the twentieth century.

"some triple-A map" -- I remember going to AAA as a kid (1980s -- same era as Calvin and Hobbes ran) with my parents before big trips -- the most important thing we needed was a Trip-Tik - a customized map for the journey.

AAA was known for good general road maps, too. (Not just the triptiks)

And apparently at least as of 2015, these paper maps still exist:

AAA told Skift it’s not abandoning the printed version of TripTik as 1.5 million travelers asked the company to prepare paper maps for them last year. The 14 million maps created on the desktop version in 2014 and the 1.6 million on the AAA mobile app dwarf the paper number, though the latter still demonstrates the demand for print maps.

So Calvin is basically saying he does not have a customized map for his specific time-travel (as this is a pre- civilian GPS world, the map would have to be paper.

He's not referring to quality, but rather a brand of map 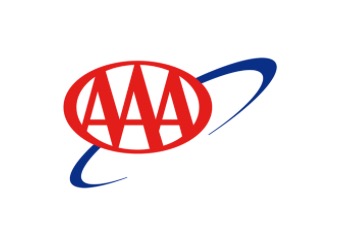 And to be more specific, he is referring to the maps they produce for free distribution to Members.

Since membership is inexpensive and includes free towing, AAA membership is extremely common amongst drivers in US most markets (or, at least, it was when the comic was published). And so, AAA is the canonical source of paper maps for most Americans* with access to it.

It's how you got around back then. Internet maps were not yet a thing, and portable smart devices were a twinkle in Steve Jobs' eye. Most cars with "map pockets" had them stuffed with AAA maps.*

Even today, any AAA office will have hundreds of maps, including all 50 states, most countries A-Z (though Azerbaijan and Armenia may be combined in one map, because together, they're roughly a rectangle), urban maps of most US cities and many international cities, sectional maps of this and nearby states, down-to-the-street city maps of almost every city in the state, etc. There are few places you can't find with a visit to an AAA office.

As a separate offering, AAA offers TripTiks, but those have nothing to do with Calvin's statement. For reference, AAA has thousands of narrow pages each depicting a section of major road. They custom-build a stack of these pages for your entire route, bind it, then mark your route in colored pen. Still available, though surely automated or print-on-demand. Nothing beat watching the agent draw your route in your book, though!

* Honestly, this varies in certain markets, such as the American West, where the Thomas Guides operate with a completely different paradigm - bound books of maps as hundreds of square tiles, each a couple miles across. Thomas got a lot of market share because the Real Estate database (Multiple Listing Service) specified locations in Thomas Guide pages and coordinates.

To add something different to the already-excellent answers above: