Is "prohibition against," a double negative?

"Prohibition against stealing," was the phrase that was being used. I get what the speaker was trying to say, but I'm just wondering if it is grammatically correct or if it could have been worded better.

A double negative is a grammatical construction occurring when two forms of negation are used in the same sentence. - wikipedia

Syntactically, prohibition is not a negated term. To be a negated form, it would need to be something like non-prohibition.

Likewise, against isn’t a negated term. It is just a preposition to relate the word prohibition to the thing prohibited.

“Prohibition against” is not a "double negative" (or rather, it isn't an example of negative concord)*. Compare “a battle against”. Even though the preposition “against” often is used to express that something acts counter to something else, it is not a negation.

As other answers mention, the word “prohibit” also does not contain any morpheme explicitly dedicated to negation. But “prohibit(ion)” does have some connection to negation in that it can license a negative polarity item like “at all”: we can say “they are prohibited from driving at all” while most speakers can’t use at all in a sentence like *“they are permitted to drive at all”. (See Greg Lee's answer to "Is “prohibit” a negative word?") 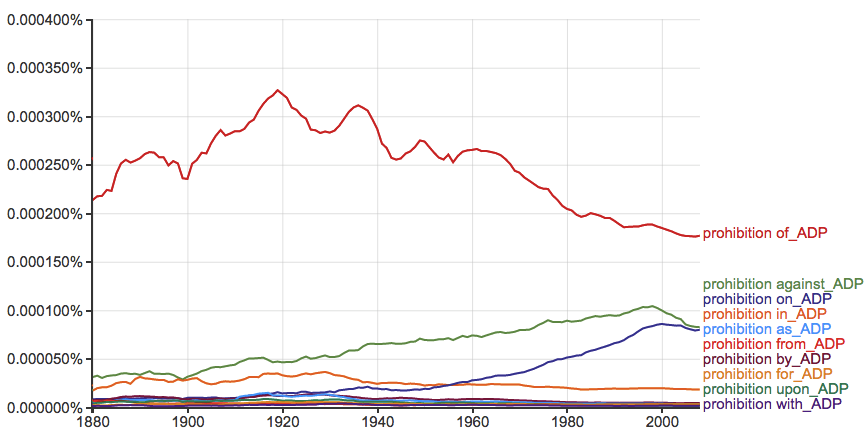 *"Double negative" is a fairly ambiguous term: it is often used to refer specifically to a construction that is excluded from the grammar of standard English ("I don't have no money" = "I don't have any money"), but a sentence like "I didn't say that he didn't come" has two negative words corresponding to two separate negations, which is completely permissible in standard English. I prefer the term "negative concord" to refer to the phenomenon seen in "I don't have no money" = "I don't have any money"; another benefit of the term "negative concord" is that it doesn't specify a particular number, since we can see more than two negative words in a sentence with concord: "I didn't tell nobody nothing" = "I didn't tell anybody anything."

A double negative? No. It's not even a single negative. Neither "prohibition" nor "against" is a negative. Examples of negatives include but are not limited to:

A negative in grammar expressly contradicts what the negative is modifying so as to indicate an absence of existence.

1
Is "prohibit" a negative word?

5
Parenthetical double negation?
1
Is it gramatically a good start to say "It is definitely not unheard that people say"?
2
Use of "either/or" in a negative phrase
1
Alternative for "couldn't not help"?
1
Double Negative with Parallelism
6
Is Shakespeare's Double Negative Grammatically Wrong?
0
Is this correct: "I didn't skip gym for no reason"
0
grammatically correct or double negative?
0
Double negative as intensifier with neither