They have some background strong

I'm trying to understand the meaning of the expression "background strong". The line in the title is quoted from a movie, "Dying to survive". Here is some frame: an indian oil shop owner wants to import from India a cheap copycat medicine for CML (which is a form of leukemia) and therefore he holds talks with an indian man who is helping him with his supply. At some point the company producing the genuine drug realized that the market is being flooded with the fake one and sues the indian government in order to prevent the production of the copycat drug. The supplier says the following while trying to explain the situation to the shop owner:

"Some said India is a pharmacy for the poor because we have a merciful government, but right now the Swiss Nuowa company is suing the Indian government, trying to stop us from producing cheap medicines. They have some background strong. No country would dare to buy medicines from us. No country."

I can't understand the meaning of that "background strong"... could you please provide a rephrase or synonym for this? Thanks in advance! 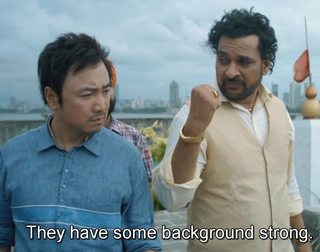 Pakistani here. The usual phrase is "strong background", but can be used as: His background is strong. It's used fairly commonly across the border here in Pakistan as well. He didn't use the exact phrase in the audio, though but that's what he meant.

Pakistani society is full of sycophants, as I'm sure is Indian society, so anyone with slightly elevated status is well regarded. Similarly, the phrase "military background" may be used not just for someone that once enlisted in the army, but their children, siblings, parents and cousins as well. I say may be used because it really shouldn't be, and some people prefer not to identify themselves by their relatives. Generally, though, family units are extremely close-knit in the subcontinent.

By the by, what he says is:

Some said India is a pharmacy for the poor...because we have a merciful government. But right now the Swiss Nova company is suing the Indian Government. Trying to stop us from producing cheap medicines. They have some backgrounds [sic] Chung. No country will dare to buy medicines from us, no country.

Chung is either the character's name, or—more likely—a nickname the speaker gave to the Asian character, on account of him being Asian.

Edit: I misread the question and misquoted it. Fixed.

Edit 2: He pronounces Chung as Chh-ung, which may be a mispronunciation of Cheng, but he's certainly referring to his co-star in the scene. He's using a softer "ch", which is a Hindi/Urdu sound, but not an English sound. See IPA Hindi & Urdu for "چھ" but that aside, don't read too much into it. Hindi/Urdu stresses and pronunciations can aren't strictly adhered to unless the speaker is explicitly trying to be proper. We have two types of K's in Urdu: the ک and the ق but messing them up is a common occurrence.

Not the answer you're looking for? Browse other questions tagged meaning indian-english sentence-meaning or ask your own question.

2
What does “90m-strong” mean here?
4
I'm looking for some background on the word “breant”
1
Have some church
0
Use some triage with