Is “I am getting married with my sister” ambiguous?

I have seen the following sentences in a book given to us during our training period at The Regional Institute of English, Bangluru

“I am getting married with my sister”

we need not raise our brows since the speaker and his sister are getting married at the same time.

I would like to know your responses regarding the information given in the book. Do native speakers really understand the sentences in the same way?

In this situation the object of to refers almost exclusively to who the subject is married to.

A Corpus of Contemporary American English search turns up 5778 collocations of "married to," and all of the ones I've looked at identify a married couple. "I got married to Priscilla" would mean that you and Priscilla became spouses. This is the normative advice given by the Cambridge Dictionary, which says:

Why do they recommend that? "with" tends to be used in reference to other people involved in a marriage.

First, let's take the more general case of "Married with." (We'll get lots of results with this to see how the preposition works.) "Married with" has 629 results in COCA. Let me show you a sample page of results: 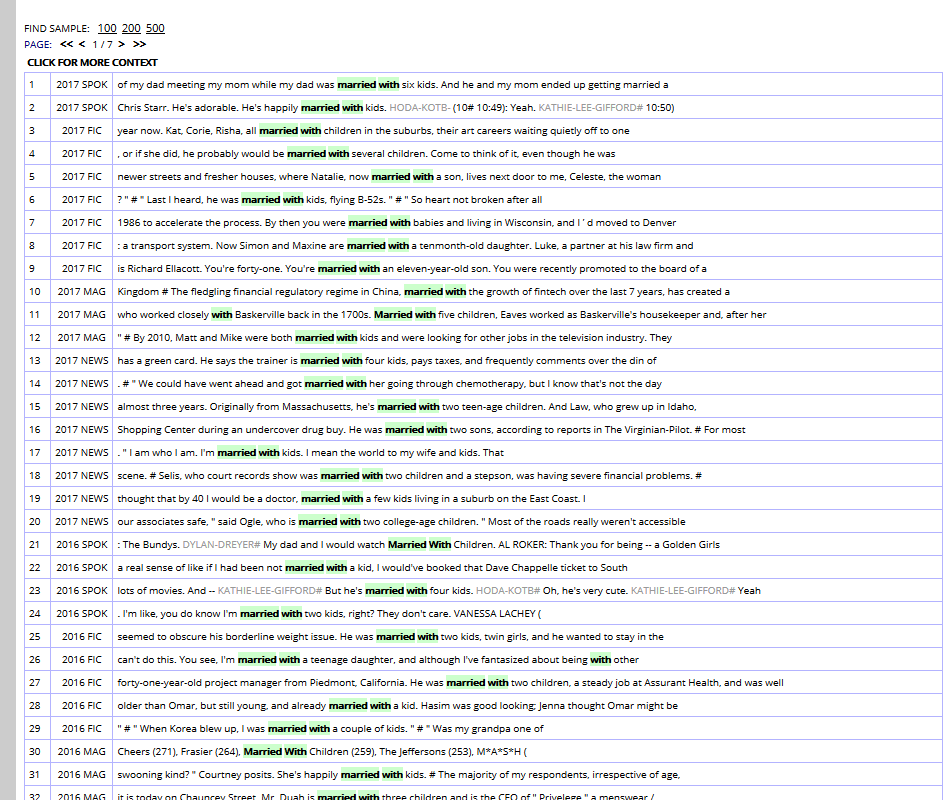 They all refer to marriage with kids or children of varying numbers! This obviously doesn't mean that the subject of the sentence has become the spouse of one or more kids. Instead, with seems to denote someone who is related to that relationship more broadly -

meaning he's (a) married and (b) with kids, or that the kids are a product or an accompaniment of the marriage.

Outside of these results, with can signify several relationships. Kids, of course, may be implied. So might a spouse:

1997 SPOK I met [Princess Diana] really at the beginning when she was married with Prince Charles.

Similar categories of prepositional object recur with this more specific usage. There are people who are not the marital partner:

it's perfectly fine to get married with just your family and your very closest friends.

To get married with your child in your arms ...

Two days later, at age 22, Griffin got married with a black eye.

Everyone gets married with four sets [of linens] these days

A girl can get married with parental permission at 16

It'll be cool to get married with all the fish swimming around us...

Of course, all this is in addition to a marital partner:

You know, I'd like to get married with my girlfriend.

With all of these objects for with, the personal ones contain an ambiguity even in "get married with" - it may refer to people at the wedding or it may refer to the marital partner at the wedding. It's also theoretically possible for a person to be part of a circumstance. With this potential ambiguity, that is likely why Cambridge Dictionary recommends avoiding it for the more clear (and much more often used) "get married to."

On hearing the second sentence, I would assume the speaker meant married to and made a mistake.

The reason for thinking that is that there are countless possibilities of expressing being married at the same time as someone else. When you want to say that, you mean to emphasise the time aspect, so it seems natural to focus on that.

Some clear ways of expressing that:

We got married on the same day.

We got married at the same time.

To my ears, we can be substituted by almost any group of persons, like so:

My sister and I got married on the same day.

All my siblings got married at the same time.

In this case, it's quite obvious that they don't mean to say they married each other. If that were the case (and that was the message one tried to convey), then it could easily be said more explicitly (using the phrasal verb married to).

If one wants to be careful not to get weird looks, it's of course possible to make it extra clear that they married with other people, for example:

My sister and I got married on the same day in separate ceremonies.

My sister and I got married in a double wedding.

Married with sister is going to be understood as some kind of mistake (your sister attended your wedding, you attended your sisters wedding) or possible just what it sounds like: you married your sister. I.e the book is wrong, it will raise eyebrows.

It's so much easier to disambiguate by writing "I am getting married along with my sister." that there is not much of a point in choosing the version likely to lead to misunderstanding. Language is not mathematics: the goal is not being formally right but conveying your message.

As a native English speaker I feel that "with my sister" is too vague and confusing unless I already knew details about the wedding. I wouldn't really understand what the speaker meant if I had little or no prior knowledge about the wedding.

If I saw an old friend that I hadn't seen in a long time and then asked him how his life was going and he responded with "I'm getting married with my sister", I would absolutely raise an eyebrow and ask for clarification. There's just not enough information in that sentence alone for me to know what he's trying to tell me.

Contrary to many of the answers and comments, "married with" is a fairly common substitute for "married to" in colloquial English, especially among children, lower class, or less-educated speakers. Depending on my knowledge of the speaker, I might expect "married with" was an intentional distinction from "married to", but I would say it definitely qualifies as "ambiguous".

The unambiguous way to say this would be:

I'm getting married in a joint ceremony with my sister.

(Or maybe not; perhaps the sisters are marrying and the wedding will involve pot. The point being that English, and human language in general, is almost always ambiguous.)

It's amazing how much some people can 'talk' without actually answering the OP's question. The answer is yes, the quoted phrasing is ambiguous, and no, no native English speaker would use the phrasing “I am getting married with my sister” because it is so ambiguous.

The explanations of why that is so are all over this page, so I won't repeat them.

“Sita was married by Riva” which you mentioned means that Riva is the person who performed the ceremony marrying Sura and another person.

Not the answer you're looking for? Browse other questions tagged prepositions ambiguity semantics or ask your own question.

23
What does "I am married with three kids" mean?
3
Sita was married by Rama

23
What does "I am married with three kids" mean?
2
Is this sentence ambiguous?
1
Is the title ambiguous?
4
Is "to fight with" ambiguous?
8
For when [insert phrase]
3
Sita was married by Rama