What is the difference between optimal and optimum?

My question is exactly as the title says. Someone used "optimum" in an email to me and in my response I used "optimal," so I began wondering what the difference between them is.

I'd like to add the following lines as an addendum to other answers.

In some areas of mathematics, an optimal value is essentially a local optimum; i.e. it's an optimum value in its neighborhood. For example: 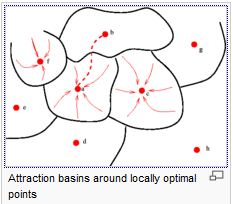 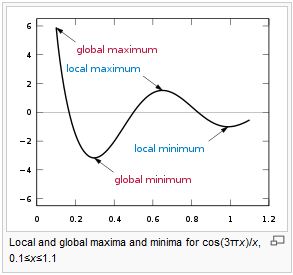 The adjective forms of optimal and optimum are synonymous:

optimal, adjective: most desirable or satisfactory : OPTIMUM [optimal concentration of a drug]

optimum, adjective: 1. most favorable or most conducive to a given end especially under fixed conditions [question is one of combining these various techniques to optimum advantage]; 2. greatest or best possible under a restriction expressed or implied [an optimum return on capital]

However, optimum also has a noun form:

optimum, noun: 1. the amount or degree of something that is most favorable to some end; especially : the most favorable condition (as of temperature, light, moisture, food) for the growth and reproduction of an organism; 2 a : greatest degree (as of growth, activity, or effectiveness) attained under implied or specified conditions [this pest reaches its optimum further south]; b : a period of warmer and drier climate than that of the present [he post-Wisconsin optimum of the northern hemisphere is considered to have occurred between 6000 B.C. and 3000 B.C]

[All from Merriam-Webster Unabridged]

My usual reference on such matters, 'The Cambridge Guide to English Usage', sees no difference in meaning, but concludes that optimal is the more formal of the two. Optimal seems to be less common in American English than in British English.

One aspect of optimal versus optimum that previous answerers have not addressed is the shifting balance of popularity between the two words. According to Merriam-Webster's Eleventh Collegiate Dictionary (2003), the noun optimum has a first occurrence date of 1879 and at some point also began to appear as an adjective, whereas the adjective optimal has a first occurrence date of 1890—just 11 years after optimum debuted.

As noted in Gnawme's answer, Merriam-Webster says that optimum as an adjective is identical in meaning to optimal. But there has been a considerable shift in frequency of written use between optimum and optimal over the past century. Consider the Ngram chart for optimal (blue line) versus optimum (red line) for the period 1880–2005:

As noted above, optimum can be either a noun or an adjective, whereas optimal is strictly an adjective. But despite competing in only one dimension against a two-dimensional word, optimal shot past optimum in frequency of usage in the early 1970s and, as of 2005, was nearly three times as frequent in the Google Books database as optimum.

Of course, one possible explanation for the very different trajectories of optimal and optimum in the preceding Ngram chart is that (1) optimum and optimal never really competed head-to-head much, because optimum has always appeared primarily as a noun, but (2) in recent decades, the fashion in writing has turned away from using the noun form (optimum) in favor of what was always the preferred adjective form (optimal).

Of the ten pairs I tested, Ngram found only one instance in which—as of 2005—the preferred adjective form was optimum (optimum temperature). For seven of the nine pairs in which optimal has become the preferred adjective form, the point at which the optimal form passed the optimum form in frequency was between 1975 and 1985; in the other two, the crossover occurred in the early 1990s.

From these tests I conclude that, in most contexts, popular usage now prefers optimal to optimum as an adjective by a significant margin—although prior to 1970, the reverse seems to have been true. In Google Books matches for the two adjectives, I don't see any obvious difference in the formality of the writing where the two forms appear, notwithstanding the view expressed in The Cambridge Guide to English Usage cited in Barrie England's answer. Nor do I see any particularly striking difference in preference for one term over the other in U.S. usage and in UK usage—as, for example, in the results for "optimal level" (blue line) versus "optimum level" (red line) in the corpus British English:

and in the corpus American English:

In short, the biggest difference between optimal and optimum as an adjective today may be that in the past 50 years optimal has become considerably more common than optimum in published English writing and seems poised to increase its advantage in popularity going forward.

I'm pretty sure in the discrete math course I took that optimal was used for arguments (or domain) and optimum was used for value (or range). An optimal solution produces an optimum value. For example: last week the optimal day for rain for the petunia garden was Tuesday. 7mm of rain fell on Tuesday which was close to the optimum rainfall for petunias of around 5mm per day.

I haven't been able to find a mathematical definition of optimal and optimum to refer to but the most common phrase I've found for "optimal" on a web search is "optimal solution" which is consistent with my definition.