Is "Fredo" an insult to Italian-Americans?

Recently in the news there's been some kerfuffle about a verbal exchange between CNN anchorman, Chris Cuomo, and a person who called him “Fredo”. In the cell-phone video, the man claims

I thought that was who you were

Cuomo responds that his name is Chris and he works for CNN. He then explains why he is offended by the term “Fredo" and why it is insulting for Italian-Americans.

Only punk-ass bitches from the right call me Fredo.
Fredo is from The Godfather. He was a weak brother. And they're using it as an Italian aspersion. […]
[“Fredo“] is like the n-word for us.

During the argument, Cuomo's anger escalates and in the ensuing expletive-ridden tirade, he threatens to use physical violence. The man repeatedly but calmly (probably seeking to bait Cuomo) interjects

I thought that was your name

Many reports clarify that "Fredo" does not carry the same cultural baggage or level of hostility as the n-word. Italians were neither enslaved nor victims of a systematic genocide in the US or in Europe. I am unaware if this term is considered a slur in the UK, I suspect it isn't, it seems to be exclusively American English. Hannah Gold for The Cut writes

Unfortunately, the President of the USA decided to stoke things further by tweeting the following 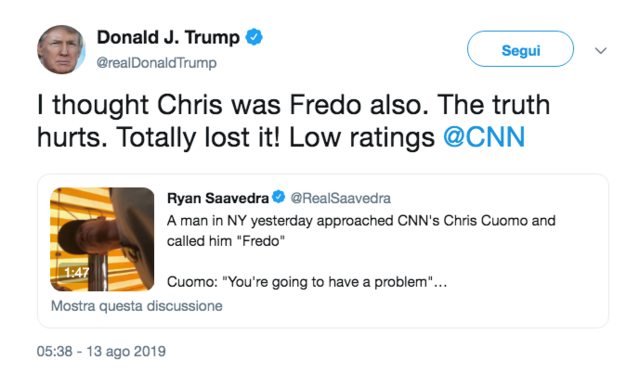 I thought Chris was Fredo also.
The Truth hurts.
Totally lost it! Low ratings at CNN

Would Chris Cuomo be given a Red Flag for his recent rant? Filthy language and a total loss of control. He shouldn't be allowed to have any weapon. He's nuts!

In my estimation, it all amounts to nothing more than an emotionally-driven burst of anger and frustration. Nothing worth parsing word-for-word.

Cuomo is also being a bit hypocritical having previously, in jest, applied the term to himself.

Chris Cuomo once referred to himself as ‘Fredo’ in radio interview:

HOST: “There is a group of people — politicos — who always hint they might run, but not necessarily plunge all the way, and they are members of la Cuomo.”

CUOMO: “Who am I, then, Fredo?” Cuomo asked in response.

HOST: “Yes, exactly,” Sliwa said. “So you better be careful that your brother Andrew doesn’t kiss you on both cheeks and then all of a sudden they take you out on the middle of the lake and where’s Chris?”

CUOMO: “He kisses me plenty because he’s a great big brother,” Cuomo said.

Who knows what motivated his outburst, but one thing's for sure: "Fredo" can be insulting (having the impact of the words "fool" or "weak"), but it's not nearly as bad as it gets (like using the n-word).

I don't think it's "Fredo" specifically that's the insult. Calling someone by a name that's stereotypically associated with their ethnicity is likely to be viewed as racism. So he would have a similar problem if he called him "Luigi" ("Mario" might work for others, but not him, because that's his father's and son's actual names), called an Arab "Muhammed", or called a Mexican "Juan". This type of name-calling conflates all members of the ethnicity, which is practically the definition of racism, although I don't think it's considered as bad as using terms related to stereotyped activities (e.g. "spear-chucker" for black men).

However, Fredo may be insulting in multiple ways. Not only is it a stereotypical name, but it's also a weak character in a movie that emphasizes another stereotype, that Italian-Americans are gangsters.

However, I don't think it's an established, idiomatic insult like the N-word. I think Cuomo was exaggerating when he said that this was like the N-word to Italian-Americans. From Vox.com:

But Cuomo is being disingenuous at best when he says that Fredo is an insult that’s equivalent to the n-word. (In a statement of support for Cuomo, CNN also characterized the name as an “ethnic slur.”) The latter term has a lengthy and well-trod history as a racist insult, an unambiguous pejorative against black people when used by non-black people. The former is a reference to a pop cultural character from books published in the 1960s and movie adaptations produced the following decade. One is a degrading slur meant to dehumanize the target; the other is a metaphor with unflattering connotations: that the target bears a similarity to a character infamous for his lack of integrity.

Trump was re-tweeting a late-night comic who is allowed to be funny.

In The Godfather (1972) John Cazale plays the brother Fredo. He eventually takes issue with the way he is treated as the less intelligent gopher, worker bee, by everyone in the organization. The name has taken on this role in popular culture.

The man using "Fredo" as the name professed that he really thought that was Mr. Cuomo's name. I imagine this is what infuriated Mr. Cuomo even more.

There are currently several montages of people in public forums using this term all over the news from some years ago up until recently. It has become the latest offense for which to take umbrage, first or second hand, when there is nothing else worth reporting.

To answer the specific questions asked in the post body.

When did calling someone “Fredo” become an insult? Is it considered racist in the US?

The origin of the insult is apparently Fredo Corleone, the weaker and less-intelligent of two sons in the Italian mob family from The Godfather. It's not a very commonly known insult, but seems to be more-commonly known in New York City.

What did the POTUS mean by saying he thought Chris was Fredo also? Did he think the CNN news anchor was called Fredo?

As Chris mentioned, he was probably perpetuating the insults the right-wing as been throwing against him.

Cuomo said conservatives have used the Fredo label against him, and they have. In March, Breitbart, former organizational base of early Trump adviser Steve Bannon, described Cuomo as "a rabid Trump-hater lacking in the intelligence and knowledge to do his job with anything close to competence."

"This has earned him the nickname ‘Fredo,’" Breitbart said.

In May, conservative radio host Rush Limbaugh spoke of "Fredo Cuomo" and "the abject ignorance of media people."

He has a long history of repeating the stuff these organization put out.

Was he insinuating that Cuomo was weak and less intelligent than his elder brother?

This is the explanation Breitbart gave for this name calling.

Potentially. It's notable that this particularly uncommon insult was selected for an individual of Italian descent, suggesting some level of stereotyping.

Was he insinuating that the family Cuomo had Mafia connections?

Tough to discern motives, but it's possible this is part of why this insult was chosen. The far-right likes to accuse "the media" of various mafia-like things all the time.

5
Is it customary to call the former President George W. Bush “W.”, and Mrs. Bush “Bar”, in public?
6
We might have to do some "fiddling"
3
What's the etymology of "tit" (the insult)?
3
centre vs. center among Americans
6
Are there any publications which would indicate that American journalists understand the concept of ‘auto-coup’ or ‘self-coup'?