"Mouth-breathing" as slang for stupidity

I was tripped by this mouth breather, Troy, okay?

Yeah, you know a dumb person.

(Stranger Things S01 was set in 1983, but may or may not be historically accurate with regard to this piece of slang.)

Edit: On Google Books, one can find instances of the phrase "mouth breather" or "mouth breathing" in the 19th century. These are usually in the medical/dental context.

From the condition of a "mouth-breather" it is but a short step to one of two results—more often both: deafness, and that peculiarly stupid, sleepy, inane, foolish expression of countenance so characteristic of the "mouth-breather".

The action of these distorted muscles upon the soft and pliable bone of the child's face, together with the absence of admission of air to the accessory nasal cavities,—the frontal, sphenoidal, ethmoidal, and maxillaries,—causes a deficient development of these sinuses, giving a flat appearance to the cheek-bones, producing a peculiar physiognomy characterized by the open mouth, vacant stare, and almost idiotic expression of countenance. The hanging lower jaw and constant mouth-breathing, together with deficient development of the bones constituting the nasal septum and with augmented atmospheric pressure upon the roof of the mouth, cause a high-arched hard palate. ...

Dr. Casselberry, of Chicago, says, "Not only do these unfortunates look stupid, but they really are stupid, and exhibit abundant evidence of mental hebetude, with inability to fix the attention to learn, to memorize, or to reason, the whole evidencing an impairment of cerebral function which Dr. Guve. of Amsterdam has recently described under the name of 'aprosexia nasales' ...

Mouth-breathing of many years changes the aspect of the face. The open mouth, the protruding teeth of the upper maxilla, the disappearance of the naso-labial folds give the face a stupid expression.

Of course, these quotes taken from more scientific/medical contexts do not directly address my questions above on when/where this slang began to be used or remains in common use.

Green’s Dictionary of Slang dates the first usage in print of the insult mouth breather to 1915:

Green suggests the term refers to heavy breathing, but I’ve always thought it was because a slack jaw and open mouth can express confusion, which, as a permanent state, hardly exudes intelligence.

While the online Cambridge Dictionary notes a primarily North American usage, The New Partridge suggests it had reached the UK at least by 1986. No online dictionary assigns the expression a regional usage.

The marketers of this t-shirt claim the expression as “80s slang.” 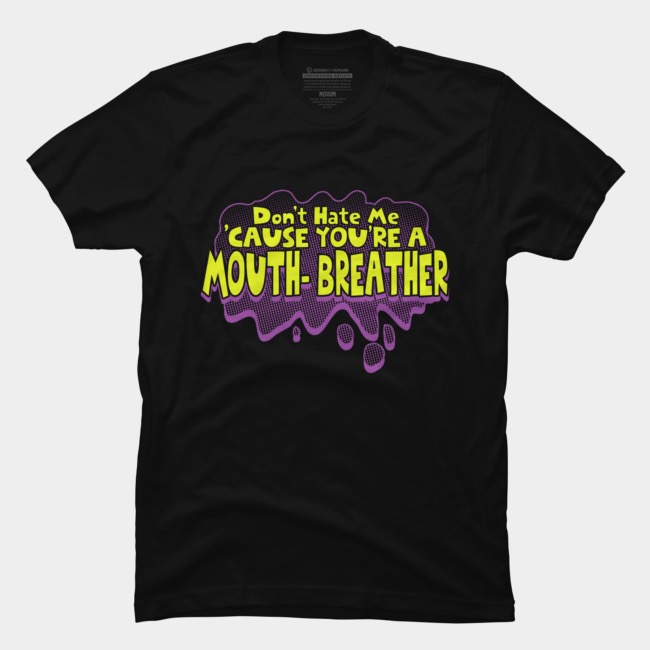 A Reddit user also recalls the expression’s popularity in the 80s. Oddly enough, that discussion arose from the same Netflix series as your question.

This would suggest the writers of the series consciously chose it as appropriate to the time period, even though many today, especially younger people, may not be familiar with it. The subsequent bit of dialogue defining the term is for their benefit.

MacMillan Dictionary dates its early usages to the ‘40s

for describing a stupid person, occurs as both an open and hyphenated compound. There is also some evidence for it having morphed into an adjective mouthbreathing.

Essentially a metaphorical expression, it is based on the idea that someone who breathes though their mouth often has their jaw hanging open, which has a tendency to make them look rather vacant or stupid. Like many new words, its popular use has been propagated on the Web, particularly by bloggers (writers of weblogs).......

The use of the word as an insult, based on the idea of the dopey expression of someone with their jaw hanging open, and possibly the nasal sound of their voice, actually dates as far back as the 1940s, but has recently emerged from obscurity through use on the Web, especially in the US, where it has also been used on television and by the popular press.

The comic-crime novels of Carl Hiaasen (I think that's a fair way to describe his genre) refer to almost all bad guys using "mouth-breather" or a variation thereof.

His first novel (co-writtten) was published in 1981. His first solo work, Tourist Season, was published in 1986. Two of his novels have been made into movies. According to the Wikipedia entry, "nineteen of Hiaasen's novels and nonfiction books have been on the New York Times Best Seller lists. His work has been translated into 34 languages."

its generally an insult, can mean stupid or fat or some combination of the 2. Other people have gone over the "slack-jawed" definition. In my experience its also a way of calling someone fat. They are more likely to breathe through their mouth because a small amount of exercise can lead them to heavy breathing is the idea.

I watch this show too, and there are some words that you simply won't understand.

I found that urbandictionary usually clears it up well.

Other words you can search on that are like dinkus, swapping spit, etc.

As for when it started being used, it looks like most occurrences are in the 1920s.