Police described his condition today as serious but stable

He was taken to hospital with serious injuries. Police described his condition today as serious but stable.

In the second sentence, what does 'today' modify, 'described' or 'condition'?

If it modifies the noun 'condition', what's the part of speech of 'today'?

In the example today is a clause-level adjunct that modifies the entire clause: 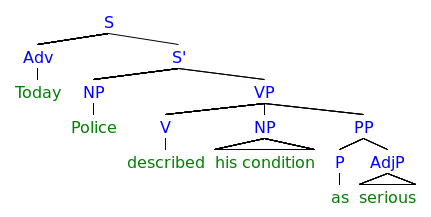 Words do not modify words; syntactic constituents modify other syntactic constituents. Do not get hung up on word order. Temporal adjuncts in English have flexible placement: they can come before, after, or at appropriate spots within the clause they modify. So today could be placed before police, after police, after serious, or after condition, and the sentence would have the same underlying grammatical structure.

If it was necessary to draw a distinction between the time of description and the time that the description referred to, then the sentence would have been phrased differently. Meaning is as vague as it's allowed to be in the context.

"Today" is an adverb modifying the main verb "described."

"The today look in clothing styles is..."

"That look is very today."

Here's a hint: If you can aptly move the modifier to both the beginning and the end of the sentence and have the sentence still make sense, it's an adverb as adverbs modifying the main verb can go either place, as well as other places, unlike adjectives, which always appear next to the noun they modify or after a linking verb.

In your sentence, you can move "today" to not just the beginning of the sentence and the end of the sentence and still have it mean the same thing, but you can also move it just before "described" and just after "described," the verb its modifying. To modify "condition," "today" would appear before "condition" as it, not fitting into any of the categories, is not a postpostive adjective.

In the second sentence, what does 'today' modify, 'described' or 'condition'?

If it modifies the noun 'condition', what's the part of speech of 'today'?

Essentially, the described [obj.] as [adj.] is replacing the described [obj.] to be [adj.] construction where the referent of the adv. today is much clearer. We still want to be able to express the time of that state of being, so we just modify the noun directly with the adverb. People do it naturally and are easily and correctly understood and so continue to do it, even though we all 'know' from school that adverb(ial)s should 'only' modify verbs, adjs., and other advs.

My first interpretation was the same as lly's: I felt like "today" modifies "condition" instead of "described". I suppose "today" could modify the clause, as jlovegren suggests, but I do not think that is the only possibility.

Here is an example of a sentence where I think it's clear that today is not a clause-level adjunct:

"I mean that Mr. Vane's son is responsible for his condition to-day."

Another example where today is not a clause-level modifier:

So, in the future, our normal condition today will be considered disabled.

Obviously "today" in this sentence could not be functioning as a clause-level adjunct, because the clause is talking about the distant future.

And a third example, this time in a clause with a past-tense verb:

The situation today was not predictable a generation or two ago, and the future too is largely unknown.

I think it might not have been a good idea to combine this question with the part-of-speech question.

The part of speech of "today" seems complicated. My impression is that it functions like a noun phrase that functions like a prepositional phrase. (Hopefully that's not incomprehensible.) Or perhaps it could be said to function as a pronoun "fused" with a preposition. Prepositional phrases sometimes function like adverb(ial) phrases, but I don't know whether there's anything particularly adverbial about today in your sentence.

The word functions like a noun phrase in sentences like "today is a good day", and it clearly has a deictic meaning: these facts support the categorization of the word as a pronoun. ("Today" can also be used as just a regular noun, but I don't think that use is relevant.)

Like the noun phrases "that day" or "the day I went on my trip", "today" can be used adverbially ("I saw the city [that day/the day I went on my trip/today]". Noun phrases used this way have been described as "bare NP adverbs of time" ("Bare NP Adverbs", Richard K. Larson). It's clear that there is no adverb or (explicit) preposition in the phrase that day, so if the usage is truly analogous, I'm not sure whether even this usage of today warrants classifying the word as an adverb or preposition rather than as a pronoun.

So I think that today is a pronoun in that sentence, but I'm not sure how to describe the syntactic function. It might involve a syntactic structure that is also used when adverbs modify nouns.

Your previous question about home seems relevant, as it touches on similar issues.

Not the answer you're looking for? Browse other questions tagged parts-of-speech or ask your own question.

5
Can an adverb modify a noun?
6
Can 'home' be an adjective as well as an adverb or a noun?