What did Marge Simpson mean when she said “629,000 results. Wow. And all this time I thought that ‘googling’ yourself meant the other thing” 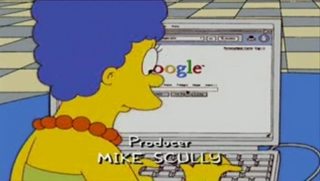 Today it's common practice to google someone's name in order to do a little background check, or to discover why a certain person is a celebrity or in the news.

In 2007, the expression “Googling" was still in its infancy, and although Marge Simpson's character is often portrayed as a naive warm-hearted housewife and devoted mother, she probably guessed, incorrectly, that “googling yourself” was slang for fondling or pleasuring oneself. 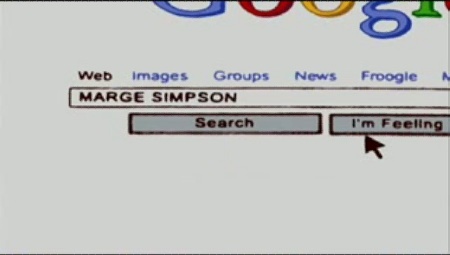 The first recorded usage of google used as a gerund, thus supposing an intransitive verb, was on July 8, 1998, by Google co-founder Larry Page himself, who wrote on a mailing list: "Have fun and keep googling!". Its earliest known use (as a transitive verb) on American television was in the "Help" episode of Buffy the Vampire Slayer (October 15, 2002), when Willow asked Buffy, "Have you googled her yet?"

Who knows what was really intended? You are, after all, free to imagine whatever you like. It might have been goosing (pinching someone's bottom). If that sounds a bit tame, it is a children's programme, and Marge is a bit of a prude.

informal to press or take hold of someone's bottom

Not the answer you're looking for? Browse other questions tagged meaning american-english slang pop-culture or ask your own question.

16
What is the source of “Long time no see,” and when did it enter U.S. English?
3
What does “Like a jug that's googling out buttermilk” mean?
0
What does “to take/catch someone off stride” mean in AE?
1
What did Kate mean when she said: “(…)? Or did Big Pussy and Meadow miss you too much?”
0
Meaning of “Are you gonna be happy.”
3
What is the term when the other person is doing same or similar thing every time you said I'm doing this or that
1
What is “from which” doing in “A living hell from which Rupert, thank God, rescued me”?
10
Source of the phrase “call [somebody] out of name”
8
What is the meaning of “did time”?
1
Meaning of “That response really put the 'luke' in lukewarm”?