I'm not English speaking, I understand the joke but say please what is "ass door"? Is it the same as butt door? Didn't find it in the dictionary. 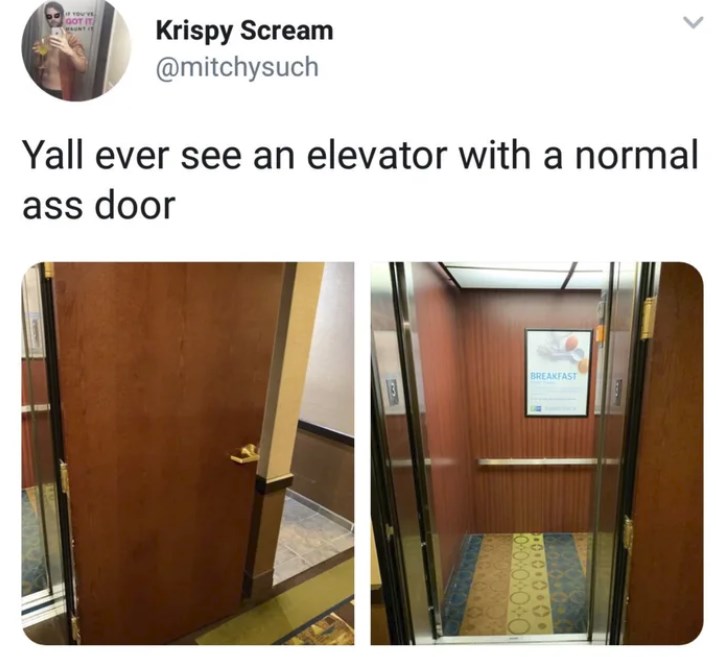 It's not a normal ass-door, not an 'ass-door' that is normal.

There's no humor here other than that it is funny the existence of a regular door but incongruously found on an elevator which usually has its special sliding door.

As to the linguistic phenomenon, '-ass' is a suffix on an adjective before a noun:

The phrasing is characteristic of AAVE but is gaining use in popular media. It has nothing whatsoever to do with the gastrointestinal tract and its exit orifice, or the surrounding gluteal muscles.

As to its meaning, it's simply a marker of informality/slight vulgarity.

Common examples of its use are:

The meaning of '-ass' is a bit vague. If you drop the '-ass' in all these examples, the explicit meaning seems hardly to change at all. "That's a lame excuse" vs "That's a lame-ass excuse", both excuses are about the same level of lameness, no more or less intense. It's just that the 'lame-ass excuse' is more ... relatable?

As to you example, a "normal-ass door" is just a door. Which is normal. No asses involved.

Some more detail: '-ass' is a productive suffix on adjectives. 'Ass' by itself is a slightly taboo term (for the butt) and so is usually only used in informal contexts and the suffix shares this small vulgarity. The emphasis/stress is on the adjective, not the '-ass'. If for some reason the accent was shifted to the ass, the meaning of '-ass' would be more literal and would modify the following noun directly.

The semantics are very similar to the '-like' suffix, meaning 'similar to', but '-like' tends to be used predicatively 'and '-ass' only as part of a noun modifier.

McWhorter explains the meaning of the '-ass' function ("Words on the Move: Why English Won't - and Can't - Sit Still (Like, Literally)", p.38) as beyond just the 'naughtiness' but more importantly 'counterexpectation' or different from what you'd normally expect.

That doesn't seem wrong for the example given. The statement is true of the situation but it doesn't seem to be an essential part of what is expressed by '-ass'. The squirrel is no grayer than without the '-ass'. As the Led Zeppelin says, sometimes words have no meaning.

The use as an adjective suffix is distinct from more the literal uses of '-ass' as a noun, as in calling someone a 'jack-ass', 'dumb-ass', and also distinct 'whup-ass' (a thing or quality to whup someone's ass with) or 'kiss-ass' (someone who is sycophantic, an ass-kisser) or 'candy-ass' (a wimp, someone with an ass of weak material like candy) or 'smartass' (an ass (the general pejorative) who is smart (or rather a smartaleck)) or 'kick-ass' (something really great, it kicks you in the ass).

Though the ADJ-ass NOUN pattern is assuredly related to the just mentioned distinct and more literal noun forms ADJ-ass, the exact etymology is unclear. But it is easy to accept the drift from one to the other. 'Dumb-ass' as a noun "What a dumb-ass" -> 'dumb-ass' as a noun "What a dumb-ass thing to do." -> '-ass' transferred to non-noun-adjunct situations "What a lame-ass thing to do.".

(note the single 's' pronounced as a voiced alveolar fricative), where the prepositional phrase headed by 'as' has been elided entirely to the preposition. "That's as simple as turning on a TV" -> "That's simple as.". This has nothing whatsoever to do with the '-ass' suffix for adjectives.

In American slang, the word "ass" is sometimes used like any other swear/cuss word to emphasise something, or as a kind of modifying suffix.

Y'all ever see an elevator with a normal ass door?

Has essentially the same meaning and emphasis as:

Y'all ever see an elevator with a normal f---ing door?

Take out the word and it means the same.

Y'all ever see an elevator with a normal door?

I don't claim to know the origin of this usage, but I would guess that words like "badass" have led to it being used as a suffix of sorts with words like "lame-ass".

Today's SMBC comic addresses the slang prefix and suffix usages of ass, the latter of which is explained in this panel: 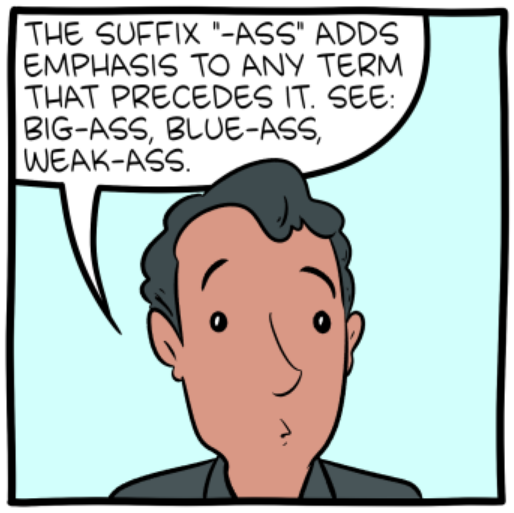 The original joke intends to use normal-ass to emphasize that the elevator's door is exceedingly normal.

Have you all seen an elevator with a normal door?

In the AAVE dialect of American English, the word "ass" is often used as an intensifier for the preceding adjective. AAVE is commonly heard in American music (particularly hip-hop, blues, and most rock), and from popular media characters being portrayed as urban or coarse. Otherwise, it is one of the most low-prestige dialects in English.

a modifier that makes no contribution to the propositional meaning of a clause but serves to enhance and give additional emotional context to the word it modifies. Intensifiers are grammatical expletives, specifically expletive attributives (or, equivalently, attributive expletives or attributive-only expletives; they also qualify as expressive attributives), because they function as semantically vacuous filler.

Technically this makes the word "ass" in this context an adverb, modifying the preceding adjective.

As a non-native speaker, its certainly reasonable to want to understand it, but I wouldn't suggest you try to use AAVE yourself, unless you are absolutely certain the context is appropriate. It is primarily spoken by African-Americans, and if you aren't part of that community, and don't get it quite right, you are likely to come across as comical, or worse. For example, this person is using it in a slightly odd context. The modified adjective should already have some kind of negative connotation, so "basic" would be much more typical than "normal" there. Combined with the profile pic, my knee-jerk reaction is he's trying to appropriate AAVE to sound cool.

Not the answer you're looking for? Browse other questions tagged meaning meaning-in-context slang or ask your own question.

11
Is there an enhancing, slangish word to put after statements, like the Norwegian slang word "ass"?

7
Why is "ass" considered obscene?
1
"To [put a] boot in the ass to do something" — uncertain meaning
3
One sentence with two meanings! "The door was locked"
0
What does "Your team kicking serious butt" mean?
0
North American joke: “What do you call Halloween boner?'”
4
What does “iron-ass” mean?
11
Is there an enhancing, slangish word to put after statements, like the Norwegian slang word "ass"?
1
meaning of 'buzz one's door'
3
How does suffixing adjectives with "ass" work out grammatically?
2
Can 'An ass that won't quit' connote stubbornness?