Why is stainless steel “stainless”?

Inox steel is stainless because it does not stain, but is stain the same thing as rust? I just want to understand since stain reminds me of clothing stains, for instance, and I am rather curious as to why one would call inox steel stainless steel. Where does the term come from?

As is well known, and mentioned in Wikipedia, stainless steel stains less easily and rusts or corrodes less easily, than ordinary steel, but it is not stain-proof and in some conditions can rust or corrode or give such appearance. For example, after a stainless steel surface is cleaned with steel wool rather than brass wool, it may develop rust stains.

Etymonline gives a 1917 date of origin of the term and says stainless steel is "so called because it is highly resistant to rust or tarnish." Edit: memidex.com tabulates definitions of stainless steel from a dozen sources, two etymology references, and several audio links. Wikipedia includes part of a 1915 New York Times article that refers to "a stainless steel" that is "claimed to be non-rusting, unstainable, and untarishable" [sic] which at least partly confutes the "stains less" etymology of stainless steel, which is suggested in the stainless-online.com link in the question. 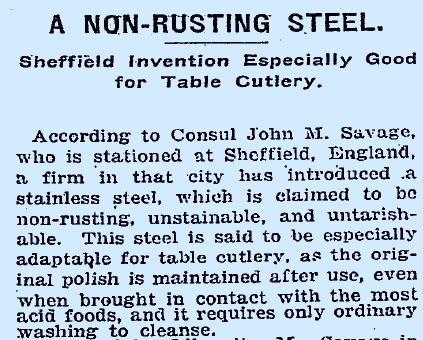 With respect to American vs. British usage of stainless steel and inox steel, ngrams shows little difference between the corpuses, and in both cases inox has nearly no usage compared with stainless steel:

Generally it's known as stainless steel, sometimes in engineering it's called corrosion resistant steel but if you are being that specific you would just use the alloy number anyway eg. 316-Steel.

Don't know who first used the word stainless - there are 3 main types of stainless steel and each form was invented almost simultaneously in Germany, England and America.

I think of stain as a more general term, which can refer to any sort of blemish or discoloration. It tends to connote that the discoloration is permanent or at least difficult to remove. A clothing stain is one example. Rust or corrosion on a piece of metal is another. It doesn't necessarily have to refer to undesirable discoloration: stain also refers to the process of staining wood, for example to make a cheap light wood look like an expensive dark wood.

However, in the case of metal, most people would probably prefer to use rust. Stainless steel, as others have suggested, was probably chosen as a marketing name because it sounds better.

In the U.S., "stainless steel" is the standard term for this material. I had never heard the term "inox" until your post.

Stainless steel is in use in both varieties. Etymonline gives its origin as

1917, a chromium-steel alloy (usually 14% chromium) used for cutlery, etc., so called because it is highly resistant to rust or tarnish.

If the compounds produced by the chemical corrosion are stable, not easy to evaporate and dissolve, of dense tissue and binding strongly with metal matrix, the corrosion products will stay attached to the metal surface to form a passivation layer, hence to protect the metal matrix from further corrosion. This behavior is known as "passivation effect."

On the contrary, if the compounds are unstable, volatile or dissolved, not bonding with the metal strongly, the corrosion products will be peeling off layer by layer, like the oxide, hence unable to protect the metal matrix from further corrosion. this behavior is known as "activation."

Why Stainless Steel is Corrosion Resistance?

Ordinary carbon steel reacts with oxygen of the atmosphere to form an oxide film on the metal surface and keeps oxidizing, which results in expanded rust, forming a "thousand-layer Cake" type of corrosion until the rotten wear.

If the passivation film on the surface is damaged, the chromium in the steel will react with the oxygen in the atmosphere to produce new passivation film for continuous protection. Stainless steel, when exposed to special environments, will also incur some local corrosion, such as pitting, intergranular corrosion, stress corrosion, galvanic corrosion and so on.

In order to avoid the local corrosions, molybdenum, nitrogen, titanium or niobium will be added to the steel. Meanwhile, the new varieties such as low-carbon stainless steel, ultra-low carbon stainless steel, and duplex stainless steel are developed to enhance the corrosion resistance. All these metals react with oxygen in the atmosphere and form an oxide film on the surface. Unfortunately, the iron oxides formed on ordinary carbon steel keeps oxidizing, causing expanded corrosion and eventually holes. Although paints or oxidation-resistant metals e.g., zinc, nickel and chromium can be employed for galvanization to ensure the carbon steel surface, this protection is only a film. If the protective layer is damaged, the steel below will start to rust.

The corrosion resistance performance of stainless steel depends on chromium. However, since chromium is just one of the components in the steel, the method of protection varies. As the chromium added amounts to 10.5%, the steel resistance to atmospheric corrosion increases significantly. When more chromium is added, the corrosion resistance will be enhanced further, but not obvious. The reason is that chromium alloying changes the type of surface oxide into another type of surface oxide similar to that formed on pure chromium metal. This chromium-rich oxide tightly adhered protects the surface against further oxidation.

Not the answer you're looking for? Browse other questions tagged american-english british-english neologisms or ask your own question.

12
Why “ladybird”?
31
Why is “math” always pluralized in British English but singular in American English?
11
Ambiguous connotation of “just” - How do natives interpret these?
40
Why do Americans go 'downtown' whilst people in the UK go 'up town'?