What are the first usages of “thong” as a wearable item of clothing, both on the feet and on the waist?

What are the first usages of "thong" as a wearable item of clothing, both on the feet and on the waist?

Tracing thongs as worn about the waist seems to lead to the Jazz Age and the "Chicago G-string", but was the term "thong" ever used back then?

Tracing thongs as worn as shoes via Cambridge does not yield any dates.

The primary meaning of "thong" is "a narrow piece of especially leather used to fasten something or as part of a whip".

For context, I am puzzling over the line

this carl on the kopje in pelted thongs

from Finnegan Wake (1939), and wondering what this man is wearing? In the next few lines we learn that he is quhare and perhaps a daddy. I had always seen him wearing leather slip-slops.

Of course it has been applied to clothing far longer than that. Thongs have been wearable for a very long time. In Middle English, they would have referred to laces, bands, and other thin leather strips. This sample from the Oxford English Dictionary (in "thong, n.") shows thongs being used as a shoelace:

(My translation) I am not, nor even worthy enough that I untie his shoe lace (thong).

The Middle English Dictionary construes "thonged shoe" as a laced shoe ("sho, n." 1b). The same dictionary's entry for thong emphasizes its use as a strap, cord, or belt (2). Here is a gloss that equates a thong to a girdle:

Lexicons of Early Modern English connects thong to a widening array of clothing. Here is an entry in the 1499 edition of the Promptorium Parvulorum that equates thong and the Latin word for a shoe strap:

Other entries emphasize buckler straps, straps on weapons, yoke fasteners, belts, the bridle throatband, the name of a castle in Lincolnshire, leashes, and the like. It was a golden age for the thong, which seemed to stand for many items of clothing and tools that were made of leather straps.

In A New English Dictionary (1735), thongs were even used to "bind the loins," which is suggestive of how girdles could be thought of more intimately than their function as a belt or fastener would suggest:

GIRDLE, a Band, Ribbon, or Thong to bind about the Loins

Loins could refer to either the hip area or, as the Oxford English Dictionary coyly puts it, "as the part of the body that should be covered by clothing and about which the clothes are bound" and "as the seat of physical strength and of generative power" (2b). So a thong could be a sensuous belt.

The modern application of thong to shoes and underwear themselves occurs in the 20th century. Up to about the mid-1950s, it is common to see references to thongs in clothing ads, though they often refer to the material of construction. Here is one from 1946 that lists a "primitive thong sandal" ("Display Ad 56 -- no Title." The Atlanta Constitution (1946-1984), Apr 03, 1946, pp. 16. ProQuest. All images used under fair use.) 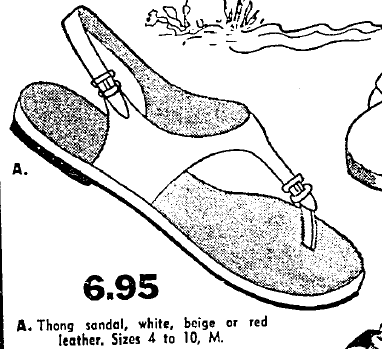 This is the style that would eventually be identified as a thong in footwear. This usage ("thong sandal") is already emerging in the early 1950s, though it would take time to disseminate. Notice the usage of thong by itself to specify "one pair" ("Accent Sports Costumes with Gay Casual Shoes." The Atlanta Journal and the Atlanta Constitution (1950-1968), Jul 13, 1952, pp. 1. ):

Thonged leather sandals with a mere strip fastening, or perhaps a buckled T-strap version, are the shoes most likely to succeed with denim playclothes. One pair is a bare-back thong with contoured straps of white smooth leather that insure secure fit.

In good journalistic style, the first instance defines the thong alongside its apparatus ("leather sandals"). Then usage takes a turn - a "bare-back thong" defines "one pair." Such substantive usages would become more common in the coming decades.

"The nylon panty, a smidge of thong" - note the profile shows a relatively thin strip around the waist and in the back. I've searched a number of advertisements; before 1975 thongs refer to sandals and occasionally other straps; at and after 1975 the underwear is quite common. Here's an article from early 1976 (Smith, Sally. "Valentine Suggestions Range from 'Cute' to Ridiculous." The Atlanta Constitution (1946-1984), Feb 12, 1976, pp. 1. ProQuest):

And the saleslady [at Frederick's of Hollywood] said she was trying to track down a few pairs of "candy pants", a thong underwear with a brief that is little more than a G-string:

We have worn thongs ever since.

According to the Etymological Dictionary Online, thong for a type of sandal is first attested in 1965; as a type of undergarment in 1990.

While sandals held on the feet by a thong between the toes were known in numerous ancient cultures, what most folks call flipflops today descend from a Japanese sandal that Allied military personnel learned to enjoy after World War II. I know that as a child growing up in Texas, we called flipflops thongs, which even earlier was a name applied to a cheap leather sandal from Mexico whose sole was made of old tires. This was definitely prior to 1965, the year my older brother graduated from high school.

A shoe store in Santa Cruz CA, for instance, was giving away a pair of “rubber beach thongs” in June 1958: 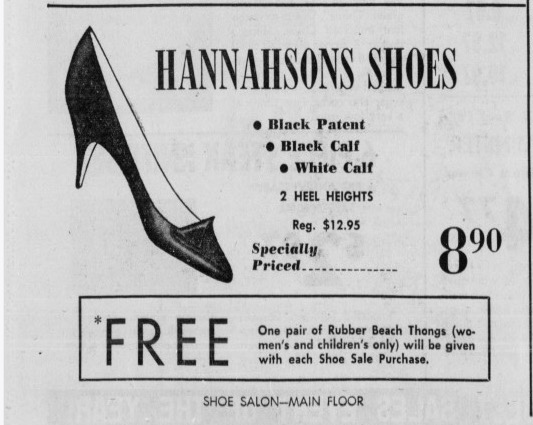 Thong underwear likely predates 1990, but not by much. I remember Joan Rivers making a joke about the fashion around that time. (Hint: it had to do with dental floss.)

Many fashion historians believe that the thong first appeared in the 1939 World's Fair. New York Mayor Fiorello LaGuardia ordered the city's nude dancers to cover themselves and the thong was invented to just barely do the job.

Fashion designer, Rudi Gernreich has been credited with introducing the first thong bikini in 1974. Another reference states that thongs, originally called tangas, first hit the beaches of Brazil in 1977.

Your puzzlement over 'pelted thongs' temporally coincides with this reference. I offer this answer only as an aid in research.

The answer accepted above is correct to date. But.

Why had I always seen leather shoes? Well, I knew that "kopje" is a hill and "Karl" a common-man, because I am South African, and these are Afrikaans terms. By the same token, as a kid in the 70's we also called "slip-slops" "thongs". I was born into a world that called some kinds of shoes "thongs".

Since the time of the Great Trek, some South Africans have been wearing hand-made "riempieskoene", which is a portmanteau of riempies-thong and skoene-shoes, and to the English speaking South African just "thongs".

As any reader of Ulysses would know, Joyce was a keen follower of southern African politics, especially the Anglo-Boer war. Further, Finnegans Wake is riddled with Dutch-Afrikaans. Most commentators only see the Dutch, but Joyce was steeped in Anglo-Boer war information.

To prove this answer, one would need to look at South African media up until 1930's, which I suspect in not online.

18
When did the term “flip flop” displace the term “thong” in North America for a type of sandal?

2
What is indeed the “first known use”?
10
What exactly does “sweep me off my feet” mean? (And why?)
1
Etymology of “mortgage” and “deed”. Are they both related to “death”?
25
The origins and usages of “waffle”
2
What is the etymology of “first crack”
5
In what context did the noun 'countdown' first emerge, and when did the word first appear in print?
100
Are the dual transportation and learning meanings of both “coach” and “train” just a coincidence?
2
Earliest usages of the literal and figurative sense of “window dressing”