A barrel of any (AND, OR, NOT) gate for logical completeness [closed]

The book is called "Introduction to Computing Systems: From Bits and Gates to C and Beyond". Section 3.3.5 Logical Completeness. It says "We say that the set of gates {AND, OR, NOT} is logically complete because we can build a circuit to carry out the specification of any truth table we wish without using any other kind of gate. That is, the set of gates {AND, OR, and NOT} is logically complete because a barrel of AND gates, a barrel of OR gates, and a barrel of NOT gates are sufficient to build a logic circuit that carries out the specification of any desired truth table". I just want to know the meaning of the word "barrel" in this context.

It's difficult to be sure because the example is not a complete sentence. It probably means something like "a large supply in no particular order or arrangement" in the manner of what you might get if you tossed a bunch of stuff into a large container like a barrel.

When I was a kid I had a game called "Barrel of Monkeys." The idea is that the plastic monkeys would be in there in any old arrangement, jumbled and tangled, and you had to lift them out by using a monkey to hook on to the next one. Then the next, and so on. 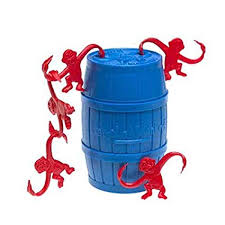 14
Meaning of "meta-"
2
Is there a connection between "pork barrel" and "gravy train"?
2
Any synonyms for "left" and "right"?
4
Logical meaning of "And / Or"
27
Are "Fish in a barrel" and "Sitting ducks" similar?
0
Differences between "give" and "give way "
1
Logical term for when an object is the same thing as itself
1
Logical disjunction and English Language
1
Modern synonym for turnstile?