Where did Shakespeare get milk of human kindness from?

In Shakespeare's 1606 play "Macbeth" the titular character is filled with ambition to become king. His wife, Lady Macbeth, says to him:

Yet do I fear thy nature; it is too full o' the milk of human kindness to catch the nearest way

She used this phrase to say to her husband is not ruthless enough to achieve his ambitions. The phrase generally has come to mean compassion and/or care for others, maybe mercifulness or something similar. All the sources I've seen simply say this is the meaning of "milk of human kindness", and that it's from Shakespeare's play Macbeth:

Fig. natural kindness and sympathy shown to others. (From Shakespeare's play Macbeth, I. v.)
McGraw-Hill Dictionary of American Idioms and Phrasal Verbs

This phrase comes from Macbeth. In Lady Macbeth's soliloquy on the subject of her husband's character, she remarks... (what I quoted above)
Farlex Partner Idioms Dictionary

In the internet search I did the only information I could find is what the phrase means and that it came from Shakespeare's play Macbeth.

I'm wondering if anyone knows what the milk is for in "milk of human kindness". Was Shakespeare the first to use it? I've checked dictionaries and "milk" doesn't have any special meanings I'm not aware of. The closest connection I can make is that milk is fed to a mother's young, and that that act can be seen as an act of self-sacrifice, love, maybe compassion in providing the nourishment for her little ones. Still, people are said to "have the milk of human kindness"; is "milk" here some metonym for love or sympathy or compassion?

There is a gross rule that will help you understand usages like this in early English literature:

Much like mentioning a cold, even today, draws a number of associations with both medicine (someone has a cold, or someone caught cold) and imagined causes like external temperature, mentioning a bodily fluid in early modern England would draw associations with the systems of Galenic, humoral medicine. As the source helpfully shared in comments by @PhilSweet points out ("The World of Shakespeare's Humors"), the four basic humors were blood, phlegm, yellow bile (or choler), and black bile (or melancholy). They were like the four elements mapped onto the body, influencing everything from digestion to mood. All other fluids, including milk, would be formed and distilled from these four. Adding fluids or taking them away (bloodletting) could be used to improve physical and mental health.

Accordingly, a person's character was thought to be determined by humors, and so they would be described in such a way. Is someone enthusiastic but hasty to act? They may be hot-blooded. Are they irritable? They're cholic. (An aside: this informs modern usages of words like sanguine and melancholy, even though modern users aren't steeped in a humoral understanding of medicine.)

In the case of milk, milk was a fluid by which mothers would nourish and thus instill character into their children. Going to your quote, Macbeth is too full of milk; in humoral terms, his bodily fluids are too far off a balance that would lend itself to ambition. Lady Macbeth is remarking that, in how Macbeth has been raised, he lacks the ambition to commit regicide. Macbeth needs more heat, either in the form of choler (yellow bile) or pure blood.

This is important because, later in the same scene (Act I, scene v), milk comes up again. Lady Macbeth asks that her bodily fluids be switched in such a way that she can commit murder. I start partway through the speech:

That no compunctious visitings of nature

Shake my fell purpose, nor keep peace between

The effect and it! Come to my woman's breasts,

And take my milk for gall, you murdering ministers,

Wherever in your sightless substances

You wait on nature's mischief!"

Lady Macbeth wants to substitute her milk (which would nourish a kid) for gall, which today would mean boldness and impertinence, but also refers to bile (Merriam-Webster). So here, too, the milk is too kind, too nourishing, and so it must be switched for something more murderous so that she can physically and mentally go through with murder.

Dictionary.com says of the idiom

Here's an interesting fact, in Czech the expression krev a mlíko is translated in English as milk and blood; however, its meaning is far removed from that of Shakespeare's milk of human kindness. It refers to a voluptuous curvy woman, it's also worth noting that milk is clearly associated with the fairer sex, and despite the idea of it combined with blood stirring in me a sense of mild disgust, "milk and blood" does suggest someone who is expressly feminine yet passionate, and added bonus, lusty too. Lest we forget, blood is red; the color of love and passion.

Similarly, the themes of blood and milk often make their appearance in Macbeth, as @TaliesinMerlin's answer also illustrates.

In the famous line, Lady Macbeth accuses her husband of being compassionate, of being too nurturing, of acting motherly. Today, some might use the slang “wuss”: failing to do or complete something as a result of fear or lack of confidence, this accusation could have been aimed at a person who had never entered into battle but to a Scottish general? Macbeth, by all accounts, was a valiant warrior whose sword had slashed and massacred innumerable lives.

"For brave Macbeth — well he deserves that name —
Disdaining Fortune, with his brandish'd steel,
Which smoked with bloody execution,
Like valour's minion carved out his passage
Till he faced the slave." I. ii. 16-20.

Bellona, the Roman goddess of war, and Macbeth her groom.

Yet, Macbeth's very own wife, the person who knew him better than any other accused him of being a loving nurturing mother. “Human milk” i.e. breast milk, is naturally warm and fed to babies, the most vulnerable and innocent participants of mankind.

I have given suck, and know
How tender 'tis to love the babe that milks me:
I would, while it was smiling in my face,
Have pluck'd my nipple from his boneless gums,
And dash'd the brains out, had I so sworn as you
Have done to this.

I suggest that Shakespeare uses the expression “milk of human kindness” in its literal sense, milk was known to be nourishing and essential for babies to prosper and grow but it was also believed to contain human personality traits. Elizabethans knew that breastfeeding was responsible for creating the profound bond between a mother and her child.

“In the fifteenth century, as Paulus Bagellardus tells us, a -mother customarily suckled her child for two or three years.”

Due in part to this bonding period, several superstitions about breast milk persisted throughout the 15th and 16th century. Wet-nurses were employed to breast feed babies whose biological mothers were unable to suckle but it was essential that these women were of good character lest the infant should suck in the vices of a sluttish or evil-tempered wet-nurse.

… for example, was the ancient belief in the transmission of qualities of temperament from nurse to child. In solemn proof whereof we are given the story of the Queen of France who, solicitous of the welfare of her infant, devoted both time and energy to suckle him herself. One day, however, she surprised a great lady of the court giving the babe her breast. Horrified and indignant, the Queen thrust her finger down the child's throat, and he, perceiving (so it almost seemed) the danger to which he had so rashly exposed himself, rid his stomach of the illicit meal, thus preserving his royal humours from contamination with merely aristocratic virtues and providing an, object-lesson to all and sundry of lower degree who might look too lightly on wet-nursing.

Source: The History of Infant Feeding from Elizabethan Times. 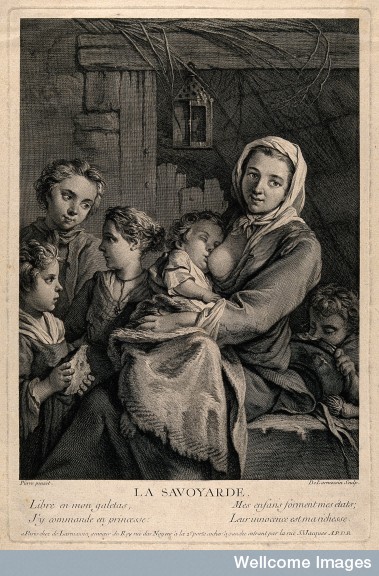 A poor woman in a dingy attic, surrounded by her children, one of whom she is breast-feeding.
Engraving by N. de Larmessin III after J. Pierre.

This superstition is also confirmed by Dr Victoria Sparey

As a substance of the humoral body, breast milk was accordingly understood to shape the physicality and mentality of the suckling child. As Thomas Raynalde observed, ‘affections and qualities [of the nurse] passeth forth through the milke into the child, making the child of like condition and manners.’

But Raynalde also argued that the milk produced by the mother was more agreeable and nourishing for an infant, noting that it was the same blood they consumed in utero, only converted to milk.

I am of the opinion that it is fit for every Mother to nurse her own Child, because her milk which is nothing but the blood whitened, which nourished the child in the womb and of which the child was conceived…

Lastly from the Old Testament, we have the binomial pair milk and honey. From the King James Bible, 1604-1611

For over 1,500 years milk had represented prosperity and goodness, its positive symbolism had been firmly established long before Shakespeare had penned the line "Yet do I fear thy nature; it is too full o' the milk of human kindness."

Not the answer you're looking for? Browse other questions tagged idioms phrase-origin or ask your own question.