How did a Greek 'table' become an English 'trapeze'?

I had cause to investigate the word trapeza in Greek and I was intrigued as to how it had evolved into the meaning of 'trapeze' as we use it in modern English.

How did this happen ?

From tetra, four, and peza, 'foot' (in the sense of extremity) comes the Greek word trapeza meaning 'table' which can be precisely translated 'counter' in English as the noun is always used in Greek as a service table for serving food or as a surface upon which to handle coinage in banking.

(A four sided figure with two sets of parallels is a parallelogram, which, if the angles are right angles, will be a rectangle.)

Since a 'table' or a 'counter' does not necessarily have to be square on top (the servant's side is actually better to be shorter than the customer's side) the word trapeza denotes, in Greek, any four sided figure.

1570 H. Billingsley tr. Euclid Elements Geom. i. f. 5v All other figures of foure sides besides these, are called trapezia, or tables.

When a wooden handle is suspended from a sloping ceiling (in a hall or a circus marquee) then the arrangement forms a trapezium (one set of parallel sides) - as seen in the inset of the picture below - and this arrangement is called a trapeze .

But there is also another arrangement when a sailor on board a small yacht or dinghy leans out from the side, suspended by a 'trapeze' in order to lean the vessel into the wind - as in the main picture below. Strictly speaking the figure displayed here (by the deck, the sailor's body, the line to the mast and the mast itself) is a trapezoid since there are no parallels and it is completely irregular.

1961 F. H. Burgess Dict. Sailing 211 Trapeze, in sailing dinghies, a sliding support used by the crew for outboard balancing when they lay up to windward. 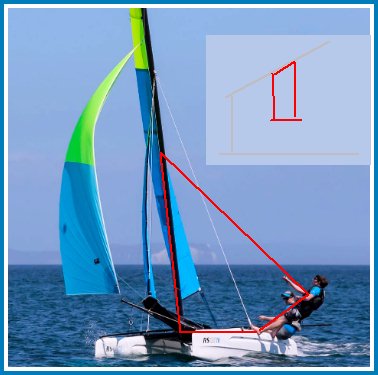 Not the answer you're looking for? Browse other questions tagged etymology greek or ask your own question.

20
How did 'anyway' become 'anyways,' anyway?
5
Why and when did 'hendiadys' change from its original 'hendiadyoin' spelling?
8
"para-" in words like "paraglider" and "parabrake"
4
Did "didactic" go through Latin before arriving in English or did it come directly from Greek?
7
Did "slave" ever apply to anything other than people?
6
What rules govern the romanisation of Greek υ
6
How did “Papa” become “Pope”?
4
When did the word "demon" (for evil spirit) come into popular usage in the English language?