Is Autistic the new “spaz” or “retard”?

Has autistic become an accepted cool pejorative through constant misuse?

While I usually would not bother with Urban, the theme was taken up…

Autism is typically said with a negative connotation. For this reason, people like to use autism as an insult, which would make sense if autism was actually bad.

…and for once I think they are doing a public service. 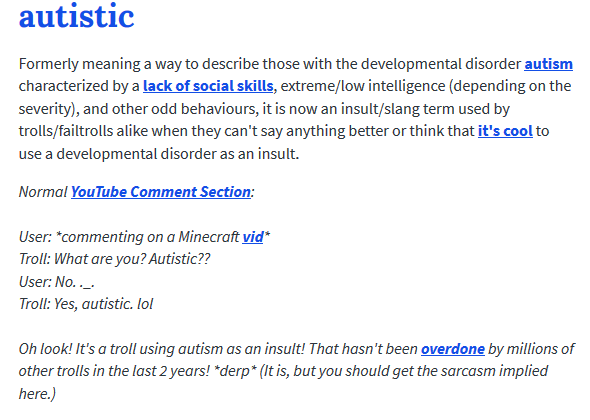 For example, the following answer still exists on EL&U.SE with 4 upvotes for "someone who takes things too literally"

slow on the uptake, obtuse, autistic

Is there an expression for someone who often takes things too literally?

another example, although deleted as offensive to a question (lo qual no me recuerdo en este momento) and one comment was:

User: You can call them autistic

Cascabel: Are you using that as an insult?

User: yeah well I guess I am.

Just as “spaz” and “retard” were used in the 60s and 70s as an insult, has autistic taken over their place as a cool insult?

Not having been there, I can't speak for the 60s, 70s, or several of the decades that followed, but here's how I see each of these words as of the present:

....is mildly insulting, even less so as a verb (I am in the US; it is apparently more offensive in the UK). NOAD doesn’t even mention it being offensive at all. Cerebral palsy is no longer described with "spaz", so the connection between them is not obvious (I didn't know about it til I looked it up). "Spazz" is also part of the names of several stores/products I've seen, and although they're unrelated etymologically, this also serves to weaken the offensiveness of the word (or at least shows how weak it is).

...has also been used an insult as long as I can remember. Although its other forms ("retarded", "retardation", and the verb "retard") range from sometimes not insulting to never insulting, "retard" is basically always an insult, and a pretty strong one I think too. Clinically, "intellectually disabled" (ID) is used sometimes instead of "mentally retarded" (MR). It may have originated decades ago as an insult, but it still has currency as one.

...in contrast to the other two words, is mostly used inoffensively to describe the developmental disorder. It's a different part of speech than the other two. There's also no good substitute (a la euphemism treadmill) to refer to the condition either ("Asperger's": too specific, "ASD": contains the word "autism", "on the spectrum": verbose). It's a little hard to judge, but certainly "autistic" is used less as an insult versus "retard" (or "retarded"), as can be seen in Corpus of Global Web-Based English (GloWbE), which has a mix of news articles, comments, and forum posts from the web. It's unfortunately more common in (online) gaming, as this post about League of Legends (a game notorious for having toxic chat) indicates.

I don't remember it always being an insult, but it is definitely an insult now. For me, it's the strongest of the three words, although I may be biased.

Oh, and I guess it's also relevant to note that Asperger's (and its derivatives) is also used pejoratively sometimes. The most common I've heard in this respect is "sperg out".

All in all, I would say that both "retard" and "autistic" are both very current insults.

Not the answer you're looking for? Browse other questions tagged meaning pejorative-language neologisms epithets or ask your own question.

11
Is there an expression for someone who often takes things too literally?

0
Is there a word for the new date of a postponement?
3
What are the implicit rules for creating new portmanteaux in English?
2
Is 'againsting' a [new] word?
7
Is “scurryfunge” a new word?
9
Wafer — New Adjective or Attributive Noun?
2
Term for the mental state of a new recruit