Can someone explain to me what vrit stands for, please? I can't find it in any dictionary.

The Interventionists is a half-hour vrit documentary that follows the days and nights of a unique mental-health crisis team.

Frederick Wiseman's no-holds-barred look at the horrors inside a prison for the criminally insane set the standard for vrit indictments, and not even a 24-year ban on public screenings stopped Wiseman from forcing accountability.

I believe this is talking about Cinéma Vérité, but the websites are unable to produce an e with the acute accent on top of it. Because of this, the text is written as if the letters don't exist:

Perhaps the best argument for this is the Amazon Canada page for the book Cinema Vérité by Denis Mortenson. While the picture of the book cover clearly shows the correct accents, the plain-text title shows "Cinema Vrit Paperback – Apr 1 2003," and the description of the book says that "Cinema V©rit© explores the depth of what love will endure." 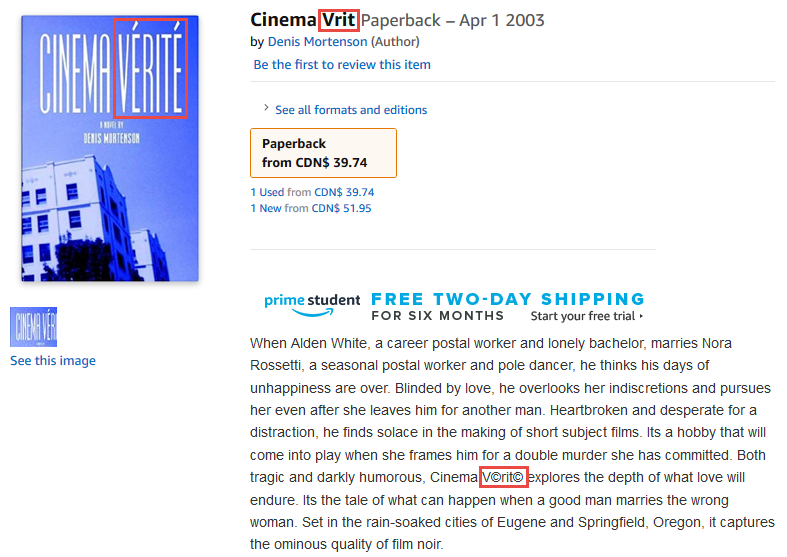 The Wikipedia page for Frederick Wiseman includes this quote:

What I try to do is edit the films so that they will have a dramatic structure. That is why I object to some extent to the term "observational cinema" or cinéma vérité, because observational cinema, to me at least, connotes just hanging around with one thing being as valuable as another, and that is not true. At least, that is not true for me, and cinéma verité is just a pompous French term that has absolutely no meaning as far as I'm concerned.

In short, there is no such thing as vrit. It's simply some websites not producing the characters that they should be. (Ironically, you'd think that Amazon Canada, one of the largest retailers for the bilingual country, would have a website that could properly produce French accents.)