English word for “product of tinkering”

Ask Question
Asked 8 months ago
Active 8 months ago
Viewed 5k times
20
Want to improve this post? Provide detailed answers to this question, including citations and an explanation of why your answer is correct. Answers without enough detail may be edited or deleted.

Is there an English word for a "product made by tinkering".
Such as "Bastel" in German, or "bricolage" in French.

If you need an example sentence:

Connotation of this is, that the quality is, shall we say, "repulsive"/quick-and-dirty.

I think this diagram from a Quora answer covers it nicely: 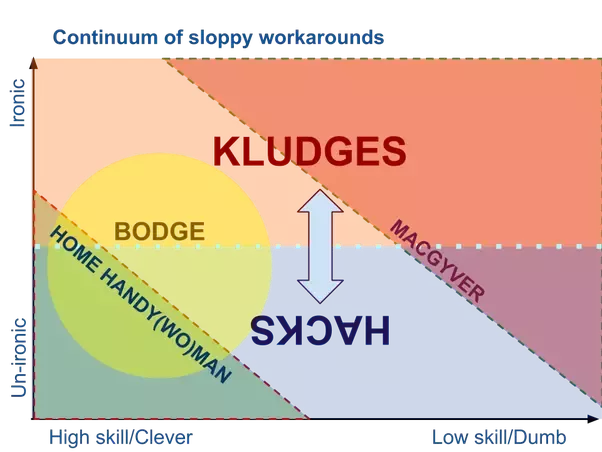 A machine or device that appears strange or unnecessarily complicated, and often badly made or unsafe.

a usually crude and temporary expedient

to erect, construct, or arrange in a makeshift fashion

2 : carelessly or hastily put together

organized or constructed in a crude or improvised manner

Depending on context, there may also be appropriate jargon, such as hack in programming (an improvised work-around to a problem, may be sloppy), or homeowner special in real estate (a modification made to a home, usually poorly implemented, that is in violation of good sense, good taste, and/or building codes).

Specifically related to software, I would say:

A hack is often used by programmers in English (in the US at least) to describe code that may function as desired, but is not up to standards and may have expected or unexpected negative consequences.

A "hack" implies something that was quick, dirty, and technically is functional, but should be corrected and done properly as soon as possible. Hacks are often intended as short term solutions but have a nasty habit of living on far longer than planned.

In modern computing terminology, a "kludge" (or often a "hack") is a solution to a problem, the performance of a task, or a fix to a system that is inefficient, inelegant ("hacky"), or even unfathomable, but which nevertheless (more or less) works.

bodge
VERB
[WITH OBJECT]
British informal
Make or repair (something) badly or clumsily.

‘the door was bodged together from old planks’

The British English for this is 'lash-up'. This implies that the solution is improvised on the spot with whatever is available, but doesn't necessarily mean that it is a bad or inadequate solution.

What comes immediately to my mind is...

From Dictionary.com: "insufficient or haphazard; not fully planned or developed"

Here's a way of expressing your idea that I have recently come up with in the context of DIY home repairs. I've been wrestling with a problem house and more recently have been househunting, and have been using it a lot.

I doubt this will be in a dictionary for the usage I've been giving it, but everyone I've tried it with has understood exactly what I meant.

An example sentence, talking about a "staircase" leading to a primitive cellar (it's sturdy but so steep you have to turn around and go down like you go down a ladder):

Kludge is the one that immediately came to mind.

Specifically for software there is cruft.

It is used particularly for defective, superseded, useless, superfluous, or dysfunctional elements in computer software.

If you need a verb, to cobble up may fit.

He spends every weekend tinkering (around) with his car. I wish the government would stop tinkering with the health service.

So sometimes tinkering will result in an improvement, gain of knowledge or something else even an innovation, but this part got me thinking that tinkering is presented as a negative thing.

What your are trying to convey here is that, that software is poor design and quality. Even more is like someone es getting offended just by looking at the code(been there), in which case I'd use the word

The new housing development is a mishmash of different architectural styles.

Meanwhile I believe that Farrago will fit very well as it is a formal disapproval.

If you describe something as a farrago, you are critical of it because you think it is a confused mixture of different types of things.

EG: His own books and memoirs are a farrago of half-truth and outright invention. [+ of]

Usually, these describe the materials in an unfinished (still being tinkered with) state, but I'd imagine that the phrase is usable for less serious endeavors.

might work here in the sense of "assembled fast" e.g. "a quickly thrown-together software application"

From macmillandictionary.com: to make something quickly because you do not have much time

You can call something a hack, as other answers said, but it has strong connotations that it might not work properly.

You could instead say that this solution has been hacked together. Emphasize on the lack of nice paint and finish by adding a time span: hacked together very quickly / in one afternoon.

You may also want to stress how little effort has been spent on the presentation and polishing of the product, and as such call it a quick and dirty effort.

These two words imply less a connotation that this is not a proper solution, but rather try to emphasize that while proper (or even just sufficient), it might lack beauty or elegance. Compare this to a sausage factory (an unappealing process to generate something familiar).

sleblancsleblanc
30411 silver badge33 bronze badges
add a comment  |
0
Want to improve this post? Provide detailed answers to this question, including citations and an explanation of why your answer is correct. Answers without enough detail may be edited or deleted.

"tweak" (noun) (informal) a fine adjustment to a mechanism or system. Source https://www.google.com/search?q=tweak

Specifically about your example sentence -- at the office, I'd usually complete that sentence:

That's not software, that's a prototype.

This is a way to say, "That solution might seem to work, but we can't deliver it to customers."

Software developers are supposed to know the difference between prototyping and professional development, so depending on the context, this can be a subtle, or not-so-subtle jab.

The non-ironic case is when a prototype was created deliberately, and non-technical folks naively want to use it as-is.

Kludge or hack convey the same meaning, but are more aggressive. Prototype is more polite but definitely conveys the point that the software is not built on sound architecture.

Skunkworks - an experimental laboratory or department of a company or institution, typically smaller than and independent of its main research division. Although, skunkworks usually describes the effort involved in tinkering.

ToriTori
111 bronze badge
add a comment  |
Want to improve this post? Provide detailed answers to this question, including citations and an explanation of why your answer is correct. Answers without enough detail may be edited or deleted.
Highly active question. Earn 10 reputation in order to answer this question. The reputation requirement helps protect this question from spam and non-answer activity.

Not the answer you're looking for? Browse other questions tagged single-word-requests vocabulary or ask your own question.

11
Metaword required
5
Word for the product of a challenge
13
How to express something given to a customer for “free in a non-immoral, non-sexual, non-promoting context”?
16
Calque pairs like 'praeternatural/metaphysical'
3
Automatically advance to the next step
2
Translation for German “brav aussehen”
3
Word or phrase for the beauty in pain, tragedy, damage, etc?
16
More formal word for “know-it-all”
2
Word for testing a product on yourself