This question is the BEST-uh!

Is there a name for the extra “uh” syllable that is sometimes added as emphasis on the end of words? From looking for examples this is an extra schwa syllable added to words. From further searching it seems to be more common among younger people. Children, teens, and young adults more than anyone else.

I used to play this all the time-uh!

It is so common that I feel there should be a name for it.

Some examples (added as I find them)

"I used to play this all the time-uh" : this is what I saw that drove me to ask the question. This is only a mild example of what I mentioned.

The cartoon (and comments) here show this phenomenon

Video linked from the previous link... with questionable language!

Video from an SNL skit. "Sorry-uh!"

Amy Pond in Doctor Who. "You are late for my wedding-uh!"

To discuss the prosody of spoken English one often has to resort to the language of music: pitch/intonation, rhythm, melody, phrasing, volume/dynamic, and in this instance, cadence.

Just as in music, in rhetoric there are different kinds of cadences: a perfect or full cadence, in most speakers with a falling pitch to signal the end of a sentence — cadence derives from the Latin verb cadere, ‘to fall’ — and an imperfect or half cadence, usually with a slightly rising pitch, though different from that when asking a question.

In general, the extra vowel, most often a schwa and always with falling pitch, does not randomly occur at the end of just any word, but emphasizes the end of a phrase/clause, sentence, or paragraph — in essence, an audible comma or period to mark a cadence.

One could also think of it as the vocalization of a normally silent or barely audible consonantal release or in the case of stops, aspiration. To my ears, to pronounce the extra vowel in a vowel-final word, the air flow must be stopped briefly to articulate it. As such, it can be found in a wide variety of oral speech. 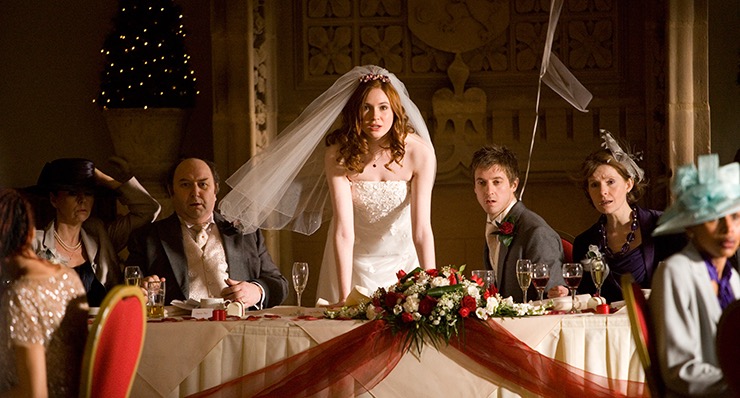 In the fifth season finale of the new Doctor Who, Amelia Pond (Karen Gillan) cries out to the Doctor (Matt Smith): “Raggedy Man, I remember you, and you are late for my wedding-uh!” In this case, it marks the cadence of an entire speech which has increased in volume and intensity before the Tardis materializes.

I remember this instance especially because I do not generally associate this feature with British English, but rather a particular kind of revivalist/evangelical preaching in the American South:

The roving evangelist would have a sawdust oval laid out and a circus tent erected over it, with folding chairs and an elevated platform with pulpit, and before the platform a clear spot for the healees to throw crutches or walkers or dark glasses and canes, ear horns, once the evangelist had laid a hand on their foreheads and yelled, “Heal in the name of Jesus-uh!” — Paul Ruffin, “Harvey Watson and the Angel,” Jesus in the Mist: Stories, Columbia SC, 2007, 14.

After a slight warm-up an 11-year-old preacher often punctuates a lengthy hymnic/lyrical section with these extra vowels and always with an audible intake of breath, the prosody underlined by a musical accompaniment much in the manner of a recitativ.

As far as I know, this feature has no technical designation, but as it is most commonly heard marking cadences, cadence marker would do adequate service, or with more detail, a schwa-augmented cadence might be a good suggestion.

Not the answer you're looking for? Browse other questions tagged pronunciation emphasis or ask your own question.

2
“The” for laying emphasis
4
Can all question words be followed by “the hell”?
0
Does emphasis ever change the fundamental pronunciation of a word?
0
How to best correctly spell this sound?
1
Is it correct to emphasize with “do” when using the verb to be?
1
How to pronounce “Question”?
0
How to stress the subject in a question beginning with “why”?
0
Emphasis sentence? How to interpret this sentence? (With ~)