The “prickmouse” and the “butcher's broom”

I sometimes go for walks in the wood near where I live; and in the undergrowth, beneath the oaks and pines, you'll find an evergreen prickly shrub which is called pungitopo in Italian. The word is derived from pungere (to prick) and topo (mouse). Its cladodes, which are easily mistaken for leaves, are like those of holly. In order to deter mice from eating their food supplies, it is said that country people would tie branches of pungitopo in a bundle and hang them with the preserved meats (salami, dried sausages, capocollo etc.) from the rafters or ceilings. As the bundle dried, the branches not only didn't lose their spiny ‘leaves’, but the spikes became sharper and deadlier. 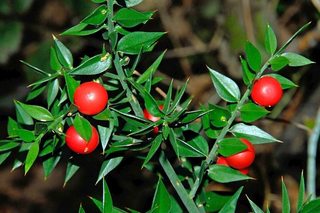 The Germans call it Stechender Mäusedorn, which I think is literally translated as “pricking mice thorn”. In English, the same shrub is called butcher's broom. Dictionary.com says the term first appeared between 1555–65 although the plant obviously existed long before then. Several sources claim that the branches of this plant were used by butchers to sweep their chopping blocks clean and recent research suggests that the plant also contains antibacterial oils.

If we look at the meaning and etymology of broom we find the following by Oxford Dictionaries and Etymonline.

broom: A long-handled brush of bristles or twigs, used for sweeping.

Its origins date back to the name of several types of flowering shrubs, called brōm in Old English.

Old English brom, popular name for several types of shrubs common throughout Europe (used medicinally and for fuel) and characterized by long, slender branches and many yellow flowers, from Proto-Germanic *bræmaz "thorny bush"

As "twigs of broom tied together to a handle to make a tool for sweeping," mid-14c. 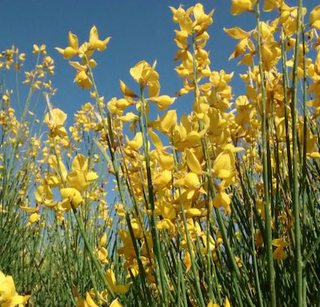 Spanish broom (Spartium junceum) fits the description above, indeed its flowers are yellow, and its branches are long and slender but it looks nothing like the butcher's broom.

So was the 15th century butcher's broom originally called holly? According to Etymonline and Wiktionary, holly dates back to holin, a shortening of holegn, and holen from Old English. And possibly derived from Proto-Germanic hulisaz (“butcher's broom, forest thistle, holly”) 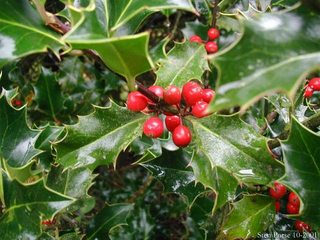 The earliest citations I found of butcher's broom were in an English Italian dictionary, dated 1611, and in a compendium of therapies attributed to the renowned French barber surgeon, Ambroise Paré, written in 1649.

…which have relation to the spleen: as, as Time, Epithymum, Broom flowers. Cetrach, Capers, the bark of their roots, the bark of Tamarisk. Diureticks, such as respect the kidnies and urinarie passages: as, the roots of Smallage, Asperagus, Fennel, Butcher's broom, the four greater cold seeds, Turpentine, Plantain, Saxifrage. Arthniticks, or such as strengthen the joints: as Cowslips, Chamepytis, Elecampane, Calamint, Hermodactils, and the like.

In Italy, I am not aware that pungitopo was ever used for sweeping floors as the grain, saggina, in English “sorghum” or “broom corn/broomcorn” in the US, has been used to make brooms since the medieval. 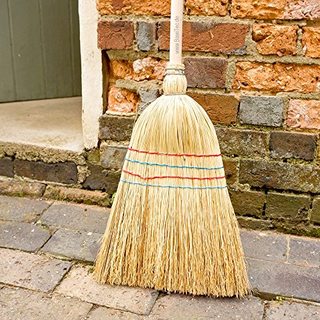 Although the origin of broomcorn is obscure, sorghum apparently originated in central Africa. Production of this crop then spread to the Mediterranean, where people used long-branched sorghum panicles for making brooms in the Dark Ages. Broomcorn may have evolved as a result of repeated selection of seed from heads that had the longest panicle branches. The broomcorn plant was first described in Italy in the late 1500s. Benjamin Franklin is credited with introducing broomcorn to the United States in the early 1700s.
NewCROP Purdue University

As I was reading up on pungitopo and brooms in Italian, I came across the term bruschino, the diminutive form of brusca spazzola, a brush which can be used to either scrub the floors, wash the laundry or for grooming horses. The Italian bruschino looks very similar to the English “brush”–a coincidence?

As you can see, I managed to rake together some information but I'm still itching to know a few other things. Mainly...

An important point relevant to this question is that the earliest meaning of the word "broom" in English, dating to c1000, referred to a particular species of flower. It appears that "broom" as a botanical term in English was not a metaphorical extension of tools for sweeping, but rather the original meaning, figuratively extended to refer to the tool.

A shrub, Sarothamnus (or Cytisus) Scoparius (family Leguminosæ), bearing large handsome yellow papilionaceous flowers; abundant on sandy banks, pastures, and heaths in Britain, and diffused over Western Europe. Also the genus to which this belongs, and the allied genus Genista, including the White Broom, and Giant or Irish Broom cultivated in gardens, and many other species.

The OED proceeds to offer an extended definition that includes more plants as definition 2:

Entering into the name of various other plants used for sweeping, or in other respects fancied to be akin to the broom proper; as butcher's broom n., Spanish broom n. (a kind of grass).

Note that in this context, "broom proper" likely refers to the plant Sarothamnus Scoparius, not "a utensil for sweeping things," which the word would come to mean later, first recorded in the 1400s.

Far more botanical brooms are discussed in modern texts, including in Wikipedia.

Because of this evolution of the word "broom," the OED makes only a passing reference to the specious etymology provided by The Rural Cyclopedia, edited by John Marius Wilson, which contains this excerpt on "butcher's broom."

The whole bush is gathered by butchers, and made into besoms for sweeping their blocks and shops; and hence it obtained the name of butcher's broom.

The complete text from the journal can be viewed here on Google Books.

It seems notable that this citation is from 1847 whereas the term "butcher's broom" dates back to 1538 (and, as noted above, broom itself dates back to c1000), so the veracity of the Cycolpedia's etymology shouldn't be assumed infallible.

Prior to offering the 1847 citation as comparative evidence, the OED makes its more primary etymological assertion:

Apparently so called on account of the appearance and texture of the stiff, spiny tips of its leaves

That long-handled implement that witches and wizards play Quidditch on was likely named after a kind of flower, not the other way around.

The suggestion here is that the transfer of the term to the utensil used for brushing is figurative. I suspect not. The plant was dried and used as a brush. Nothing figurative about it.

-1
Etymology: to till the land
3
Is there any connection between “machination” and Machiavelli?
7
Dust vs. Undust?
8
What is the word for the gesture when someone takes three fingers and kisses it into the air?
6
Possible Italian origin for English expressions "easy peasy" and/or "easy breezy"?
3
Why does English have the word "broomstick"?
30
Is it technically correct to call an almond drink "milk" in English?
8
Why is the origin of “threshold” uncertain?