Is there an idiom or saying meaning the opposite of “the grass is always greener on the other side”?

I'm looking for an adage that describes a situation where a group is blind to their own faults or situation but readily discerns those same faults and situations in a rival.

This picture basically sums it up: 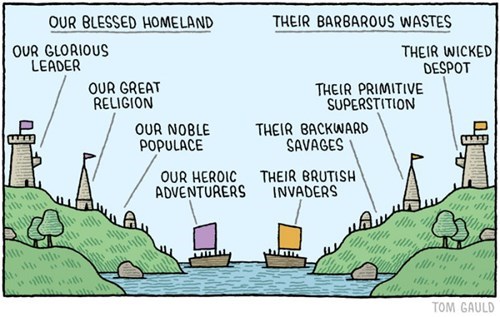 The grass is browner on the other side?

I think the saying that best expresses the opposite of things being better elsewhere is there's no place like home:

Of course, the saying became much more popular thanks to the movie The Wizard of Oz.

You could say nobody does it better than us or we're the greatest, but those aren't actually idioms.

Related would be they can't hold a candle to us:

What's the meaning of the phrase 'Hold a candle'?
The expression 'can't hold a candle to' refers to someone who compares badly to an known authority - to be unfit even to hold a subordinate position.

What's the origin of the phrase 'Hold a candle'?
Apprentices used to be expected to hold the candle so that more experienced workmen were able to see what they were doing. Someone unable even to do that would be of low status indeed.

This particular phrase implies a certain level of disparagement toward everyone else that the first phrase does not.

Since childhood, I have understood "The grass is always greener on the other side of the fence" to be an explanation of why cattle are so eager to slip around, over, or through fences into the neighbor's pasture. That, at any rate, is the explantion that my grandfather gave me when I was very young and visiting him on his farm in central Texas.

If so, an idiomatic way to make the opposite gastronomic observation might be this:

I found an occurrence of this expression presented as truism in "As We Strolled," in the [Anamosa, Iowa] Reformatory Press (July 17, 1909):

Cellhouse Custodian Knight is now a grass widower. His wife is away on visit to her sister in Cedar Rapids. There is no cooking like home-cooking.

Be it ever so humble, there's no cooking like home cooking.

6
What's the word for two people who like/love each other but neither one confesses it?
2
Is there a familiar phrase for spending too much time on something?
5
What's a good idiom to describe someone who is included in a group only because they have something the group needs
2
Phrase or idiom for an intentionally unfulfillable request
2
Trying to find an expression/idiom to match these two phrases about providing bad solutions?
16
Any English equivalent for the Persian idiom “to play dead like a mouse”?
4
Idiom for being forced to dig your own grave?
2
Is there an idiom for when the source is “clean” but the product isn't?