There is an idea that is frequently seen that states that regional accents are disappearing:

Multiculturalism and globalization often get blamed as the culprit for why accents are disappearing. Digital media and Hollywood, in a similar vein, are also often accused - saying that people all end up with "TV accents."

Is there any proof that regional accents are actually disappearing?

There are two questions here, one about the phenomenon, is it actually the case that regional accents are disappearing, and the other, what is the cause of such disappearance.

It is incontrovertible that accents (and entire languages) are disappearing. The articles you give links to refer to scientific articles that show that fewer and fewer people are speaking like their grandparents and more likely to speak the standard accent. There are many ways to show that an accent is going away but the simplest is simply a single point of many possible, the loss of post-vocalic 'r' in England. 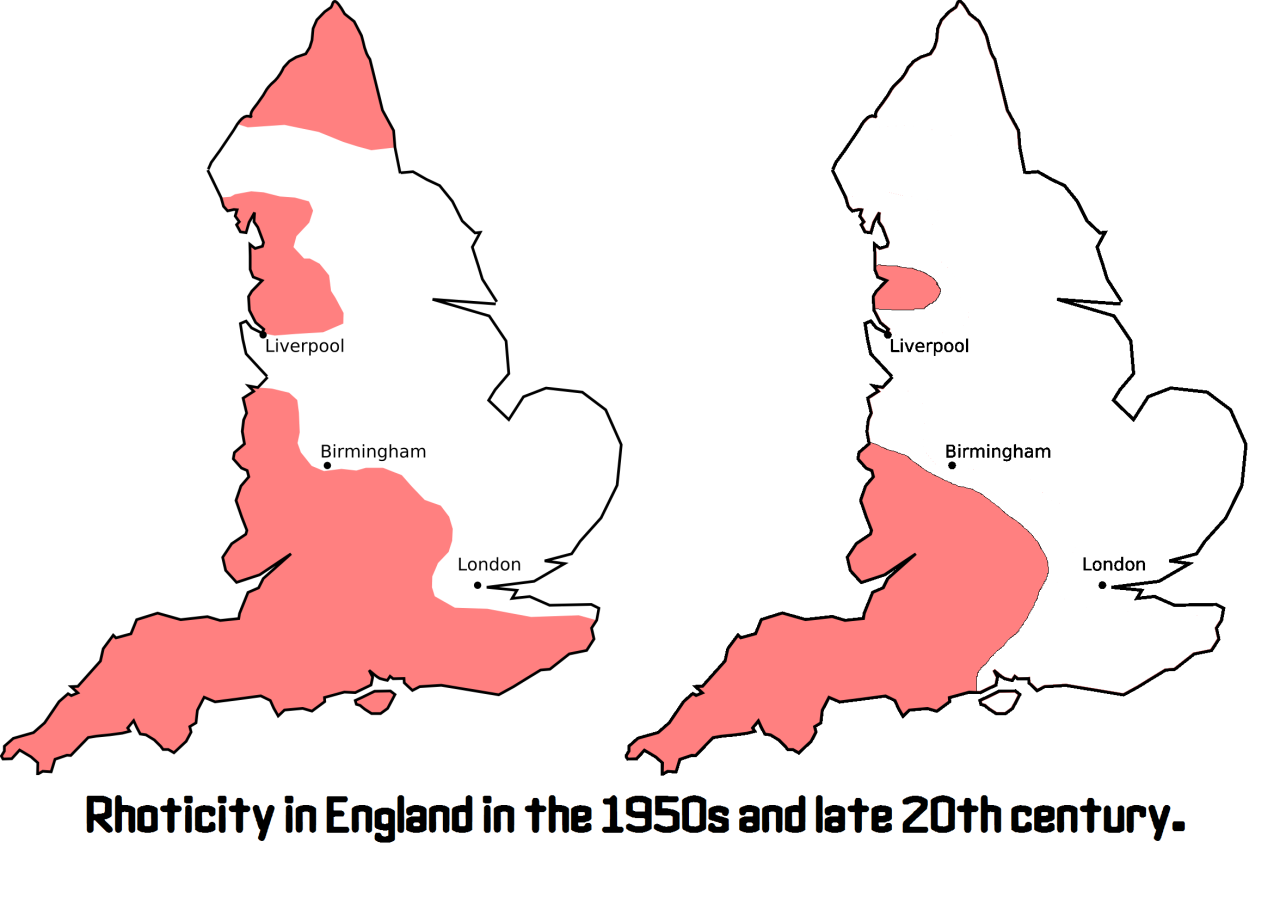 From 'Why r is not always pronounced in England'.

This picture shows the accents with 'r' in England, in the 1950's on the left and the 2000's on the right. There is a noticeable loss of people who don't drop the 'r'. A way to describe this is that the regional accents in England are becoming less distinct which is to say disappearing. Surely this is only one specific phenomenon, but it is one of many. There may still currently be a West Country pirate-like accent with its strong r's, but fewer and fewer people are speaking like that. Similarly, but in the other direction on the other side of the Atlantic, Boston or New York area or Southern accents which were traditionally r-less, are more likely to pronounce all their r's.

But this all shows that there is evidence that some features are being lost in a very general sense. There's also incontrovertible evidence that full languages, not just minor variants, are going extinct now around the world. So maybe you're asking if, specifically for English, whether of the the many labeled varieties out there in the US and Canada, UK, Australia, and other places, if any of those have just ... gone away. Surely, Geordie and Scouse and West Country and Estuary are all still around (and from movies and TV seem to all be going strong). And Saturday Night Live seems to be the place to do previously unnoteworthy accents of California and Philadelphia. On the other hand, I've noticed that people from the Southern US on TV interviews tend to surprisingly not 'have' an accent (regular people, not politicians). What I'm saying with all this is that it is unclear if the named varieties are being washed away, or if their distinctions are being encouraged, if non-standard varieties are losing speakers or gaining. That, as John Lawler hinted at in one of his comments, would take a lot more comprehensive research.

As to why any of this may (or may not) be happening though, that is a different matter. (note that the link I gave is titled 'Why' but there is only description in the text, little causal analysis).

One thing that is sure is that populations that are nearby and speak with each other tend to share language features, even if they are from entirely historically different speech populations (see Sprachbund). So it is almost boring to explain loss of distinctions, and eventually loss of accents (and even entire languages) by appealing to mass communication and globalization. The socially more prestige accents tend to hang around longer than the low prestige varieties.

The reports of dialect death are greatly exaggerated. Yes, some homogenization of dialect features including phonology is occurring. At the same time, we're also seeing some divergence through the development of new dialects. For example, take the following quote expressing dire distress:

The dialects are dying, and the competent helpers who understand them are waxing old. In a few years it will be too late.

This was from a letter written by W. W. Skeat in 1895 (as included in English in Nineteenth-Century England, 1999). Skeat, a professor of Anglo Saxon at Oxford and an eminent philologist, was appealing for funding for the English Dialect Dictionary, a monumental project that sought to preserve a record of dialects before they were lost to more standardized forms of English promoted in primary education. His prediction was premature. The continued existence of many dialects today suggests that dialects are more robust than Skeat presumed, even if some may die, transform, or merge over time.

On this point, Joan C. Beal (An Introduction to Regional Englishes, 2010) suggests that Skeat and other dialect enthusiasts were reacting to one kind of dialect change (a perceived loss of rural dialects) while not acknowledging the development of new urban dialects like Scouse, Geordie, Brummie, Cockney, and Manc (p. 6). Furthermore, such development may likely continue, as new "supralocal" or reigonal varieties may begin to emerge.

On this point, The Routledge Handbook of Language and Superdiversity ("Dialect as Heritage," again by Beal, 2018) explains one recent counterforce to the loss of dialects: heritage movements that argue for the authenticity of the original dialect. From kitschy mugs to local language classes, proponents of local dialects receive a lot of attention from both fellow locals and tourists. For example, look at this mug sold in Tyne & Wear Archives and Museums, which features the local Geordie dialect: 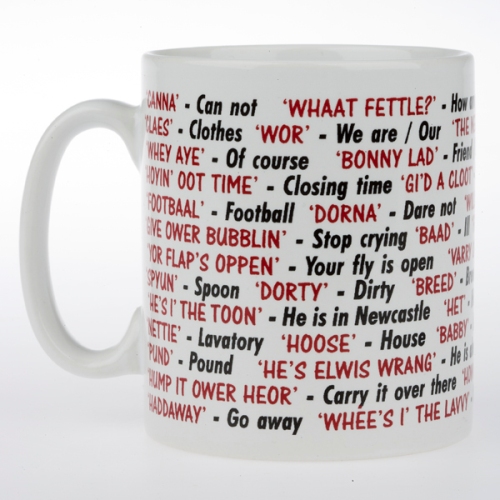 There are also many resources (including online) that seek to preserve the dialect. Most importantly, local speakers seem to carry on its speech patterns generationally. The prognosis for Geordie is good: this introduction to recent phonetic changes in Geordie and nearby dialects (from Urban North-Eastern England: Tyneside to Teesside, 2012) represents a healthy range of homogenization and increasing diversity in phonology:

Recent studies which have compared the speech of the young with that of older speakers in order to infer change in progress in the community have found evidence pointing to current changes taking place in the varieties of the region. In some respects, the varieties appear to be becoming more homogeneous as highly localised forms are being used to a lesser degree in the speech of the young. In other ways, varieties can be said to be diverging or at least maintaining a level of distinctiveness as changes are adopted to differing degrees and with modifications throughout the region. (p. 43)

So yes, sounds are definitely homogenizing between dialects, but it's not clear that the loss of any individual sound (like rhoticization) universally leads to the loss of a dialect or accent altogether. Instead, these changes are part of a broader set of changes that may lead to the loss of some dialects and the formation of new ones. As an illustration of continued phonological diversity, look at this table, again from An Introduction to Regional Englishes, p. 22: 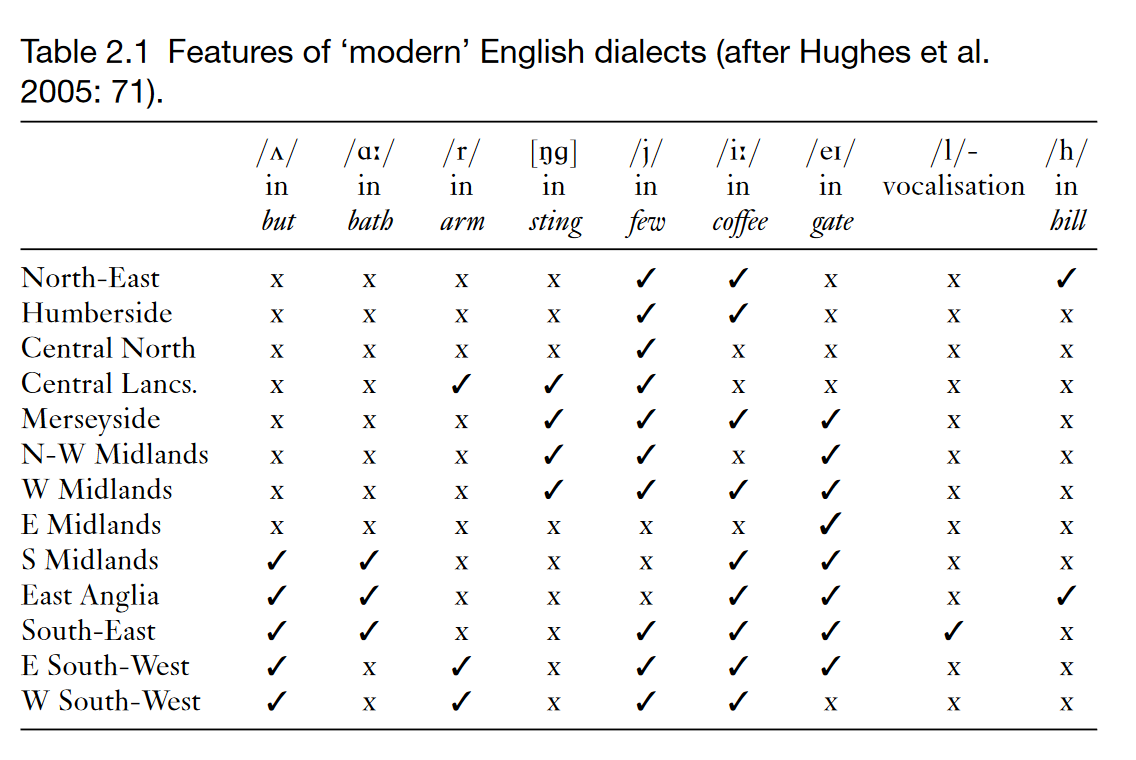 Most regional dialects have three or more distinguishing phonemes from standard English. Yes, sometimes the one region and another share many of the same phonetic features (see S. Midlands and East Anglia), but at least one phonetic difference still distinguishes them. There are also dialect differences not represented on the table because they go beyond phonetics. So the health of one's local dialect may vary, but perceptions of utter dialect death overstate the influences of industrialization and mass media.

What changes accents is not ‘globalisation’, or, at least, not that alone. Nor is it as simple as TV or mass media. People (not all people, but most people) are influenced by the people around them. Also, accents have constantly been changing. We now know that the ‘upper class’ accent of Queen Elizabeth II’s daughter, Princess Anne, has shifted over the past 40 years towards a more ordinary ‘standard’ or ‘BBC’ accent.

The force that changes accent is probably the same that produces changes of species: natural selection. Over time, for example, the teutonic languages of the Saxon and Vikings gradually evolved into English, because of the contact between invaders and invaded. Before them in continental Europe the Latin language gradually shifted into French in one place, Italian in another, Spanish, Portuguese and Romanian in others.

In the late middle ages English underwent a ‘great vowel shift’, the precise reason for which is not fully clear.

The mass media may have some influence. But it is often exaggerated. It is interesting that even though European continental rock, TV and film have been in the post war period dominated by American material, this did not produce an American style accent, as it has to a greater extent in East Asia. That is more likely to be a matter of how they are taught English and (in some cases) by whom.

This brings me onto the teaching of English. In the U.K. (or at least in England), there is one unique feature, mentioned by Greenbaum in his Oxford English Grammar: a non-regional upper class accent. This has been the accent of all upper (and often middle class people born anywhere in England and educated in private schools). This became standard English pronunciation.

So the published phonic rules that govern the teaching of literacy in compulsory schools are those of ‘standard English’ - often thought of as the ‘middle class accent’. That will tend to move many children in the Northern, Eastern and South Western parts of the country away from the regional accents of there parents. It is true that more and more schoolchildren do speak something nearer to ‘standard English.

This has not happened in Scotland, Wales or Northern Ireland to anything like that extent. This is partly because of national pride in the language. There are upper and lower class accents in Scotland, but they are all rhotic and manifestly Scottish.

I cannot speak for the US, but much the same may apply. The influences at work are a mixture of population mobility, mass media, compulsory mass education and whatever may be the prevailing approach to literacy (including phonics), fashion and, last but not least, the desire for social status.

The processes of natural selection are slow and imperceptible. But they can be accelerated by increase in agents of change: communication, education, population movement, and perhaps social attitudes and aspirations.

I shall probably be judged off topic for this, but there it is.

Not the answer you're looking for? Browse other questions tagged accent or ask your own question.