Zero article before nouns in the commonest sense

I am interested in whether the article can be omitted in a phrase like The Ideas About a Woman in Roman Literature (as in the name of a scientific article). Is the article needed here at all, since the noun is used in its commonest sense?

Some references can be found on websites of doubtful trustworthiness:

Before a common noun used in its commonest sense:

Iron is a useful metal.

But the first case has already been discussed here on StackExchange. And the second one is just a mass noun.

A detailed set of rules for the use of zero article is provided in Longman English Grammar, but it states nothing at all about the omission of articles before nouns in their commonest sense. Neither do the Cambridge Grammar of English or Collins COBUILD English Grammar.

Obviously, if we say the concept of 'woman', the article will be omitted, but if there are no quotation marks, as in the ideas about [a] woman in Roman literature, is there a rule which allows omitting the article or which explains why the article is mandatory?

P.S. Here is an example where no article is used in a paper by a native speaker, Prof. Maggie Gale.

Academic guides usually argue against this usage, but for some words (including "woman" and "man") zero-article usage is well attested.

I've encountered the "commonest sense" rule about article usage in academic writing handbooks. They often suggest making the noun plural when talking about a noun in a general sense (also called a "Generic Noun Phrase," as John Lawler mentioned in a comment to your question). For instance, here is what Rules for Writers, edited by Diana Hacker and Nancy Sommers, 8th edition, 2016 says:

29e: Do not use articles with nouns that refer to all of something or something in general.

When a noncount noun refers to all of its type or to a concept in general, it is not marked with an article. (...)

In most cases, when you use a count noun to represent a general category, make the noun plural. Do not use unmarked singular count nouns to represent whole categories.

That works well generally, and provides good advice to student writers. However, if we're being descriptive of what people do in professional contexts, I have seen this usage before. You cite Maggie Gale; I cite French Revolution-era writer Mary Wollstonecraft, who did both:

A Vindication of the Rights of Men

A Vindication of the Rights of Woman

What's the difference? "Men" refers to a group of men who need rights. "Woman" refers to the general category of woman. Even a brief skim of A Vindication of the Rights of Woman would show she frequently uses women to refer to groups of women and woman or man (without the article) to refer to each category in an abstract or general sense. The Oxford English Dictionary documents this usage for "woman, n., 2" as "women considered collectively": 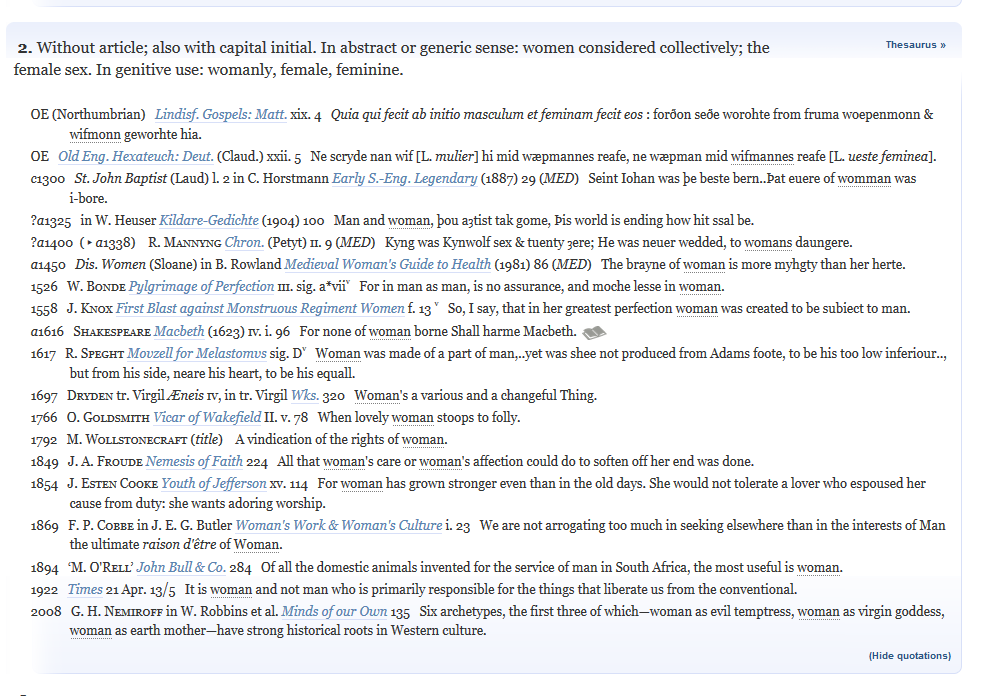 Man has a similar definition ("man, n.1, 2"), and other words occasionally are used in this way when one wants to focus on the abstract or general quality of the category rather than a group of individuals. These generic noun phrases of often-count nouns are idiomatic, which is why an academic guidebook would recommend against them in general but various well-qualified writers use specific ones without the article even today.

Not the answer you're looking for? Browse other questions tagged articles indefinite-articles determiners zero-article or ask your own question.

7
Is the phrase "man is mortal" grammatically correct?
2
Question about Generic Statements for Plural Nouns

4
Can an adjective change the use of zero versus definite article?
6
Why do people omit the definite article?
8
Using articles for generalization
0
Do we always use zero article before jobs, titles, honors?
1
Should Sporadic usage of Definite Article be placed in the middle of cataphoric usage and zero article usage?
0
Zero article and some with uncountable nouns