"Every hiker climbed a hill", is there one or multiple hills? [closed]

This question does not appear to be about English language and usage within the scope defined in the help center.

This question comes from a quiz but I could not find the correct answer. 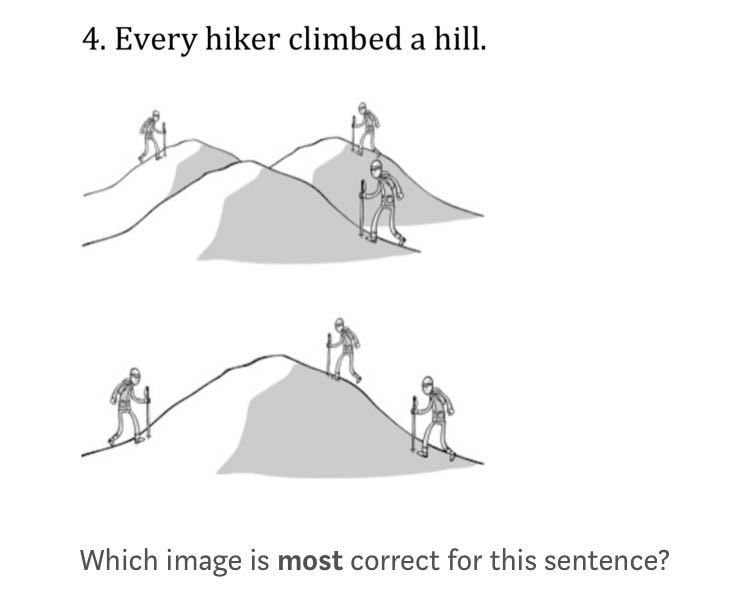 According to the supplementary materials (see p.58) of the paper for which the Quiz was conducted, the correct answer varies by English region so there is no universally correct answer to this question.

There is no way to know. As mentioned in a comment, using the indefinite article "a" does not mean that the hikers could not have climbed the same hill.

"There was an event at the park. Each participant crossed a stream, climbed a hill, and rode a bike 5 kilometers."

There is only one stream and one hill in the park. And of course, there was more than one bike -- each person had his own bike, because, really, what else would make sense? Sometimes, context is all, and language is not math. The sentence is grammatically and factually correct. However, it's possible that there was one bike and they took turns riding it. That would be something that a scientific paper, legal brief, or other technical documentation would have to clarify. In creative writing, that kind of precision can kill the flow and tone.

2
Can I say "Where can I find 'a' post office"?
0
Doesn't, Isn't, or Won't? Which is correct?
0
There are more than one seller + verb form?
0
Comma placement conjunctions
0
Perfect Usage of "Never"