When do you use “learnt” and when “learned”?

Is learnt UK English and learned US? Is it that simple?

I’m used to using learnt, but my US spellchecker says it is wrong.

Merriam-Webster marks learnt as "chiefly British", and Wiktionary as "UK", adding that learned is the "Standard US English spelling". Quoting a linguist's comment from elsewhere,

So it's not like learnt is completely unheard of in Americal English, but learned has always been more popular, and according to the COHA timetable, the usage of learnt has been on a more or less steady decline since 1820: 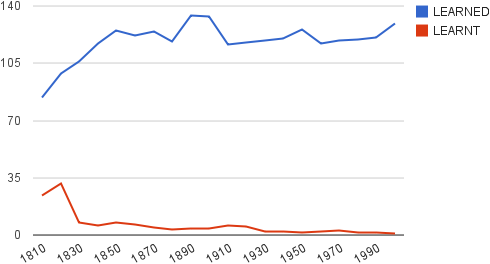 Nowadays, according to the Corpus of Contemporary American English, learnt is most popular in the context of fiction and academic publications, and least popular in newspapers:

What's more, even the British National Corpus has more cites for learned than for learnt. The stats look as follows:

It is worth noting that Merriam-Webster, Wiktionary, the American Heritage Dictionary of the English Language, and Collins English Dictionary all list learned as both a verb form and an adjective, but learnt only as a verb form.

In American English, "learned" is the usual spelling; "learnt" is too rare.

In British English, both "learned" and "learnt" exist for the verb, but the adjective (as in "the learned professor") is always "learned". (Sometimes, especially archaically, "learnèd".) 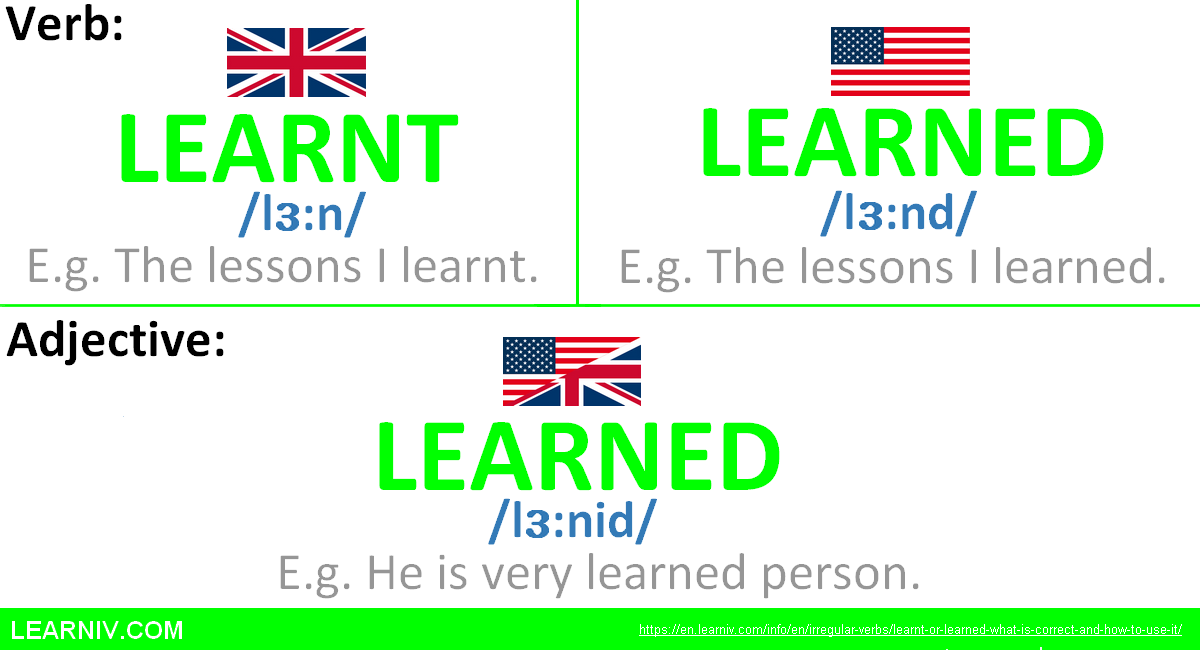 This verb has both an irregular and regular form. You can use both and both are correct. Speakers in North America and Canada use learned while the rest of the English-speaking world seems to prefer learnt.

Learned (but not learnt) is also an adjective. When said of a person, it means ‘ having a lot of knowledge because you have studied and read a lot`.

It can also be used of objects, meaning ‘showing, requiring, or characterized by learning’.

Example: She is a ‘very learned’ woman.”

But which is the most used one? Let´s look at Google Ngram Viewer tool which displays a graph showing how phrases have occurred in a corpus of books over the years.

Learned is more used, but bear in your mind that „learned“ is also an adjective, so comparing with a verb is not representative.

Not the answer you're looking for? Browse other questions tagged american-english orthography british-english past-tense ed-vs-t or ask your own question.

0
Past participle - learned or learnt?
58
Why do some words have two past tense forms (e.g. "dreamed" vs. "dreamt")?
33
"Spelt" vs. "spelled"
14
Speeded vs. Sped
16
Descriptivism and widespread misspelling
11
"Lept" vs. "leapt" vs. "leaped"
14
When would one use "burnt" and when would "burned" be more appropriate?
5
Why English does not have diacritics to distinguish between words with different meanings and pronunciations
5
Can there be a difference between learned and learnt?

10
Evolution of irregular verbs over the last century
199
What's the difference between "requester" and "requestor"?
1
Use Schedule and Timetable together
2
Is there a contraction known as the're?
5
Can there be a difference between learned and learnt?
0
When to use that's and when to use it's?