Why is the origin of “threshold” uncertain?

(13.40) George Clarke: The architecture of threshing barns is absolutely driven by their function. With two opposing doors to create the through draft, sloping floors to drain any water away from the grain and high ceilings for storage and the circulation of air.

(13.58) Dr. Nicola Verdon: Threshing was an incredibly dusty hard job, so you got these big barn doors which you would keep open to have a through draft. You can actually keep half of the doors closed and that literally is the ‘threshold’. You want a nice breeze coming through to get rid of the dust and so on but you want to make sure that the crop doesn't blow away.

(14.23) George Clarke: The threshold to the threshing barn… it is ‘holding in’–that's brilliant– all the material. 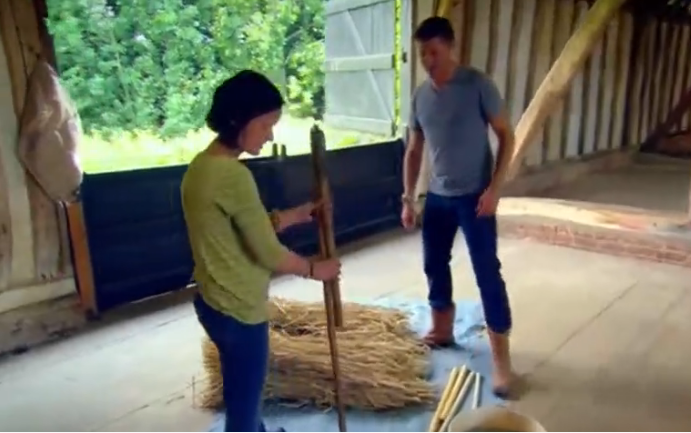 …the oft-repeated story that the threshold was a barrier placed at the doorway to hold the chaff flooring in the room is mere folk etymology.

That derisive comment has since been modified; today Douglas Harper, the owner and editor of Etymonline, says

Old English þrescold, þærscwold, þerxold, etc., "door-sill, point of entering," a word of uncertain origin and probably much altered by folk-etymology. […] Liberman (Oxford University Press blog, Feb. 11, 2015) revives an old theory that the second element is the Proto-Germanic instrumental suffix *-thlo and the original sense of threshold was a threshing area adjacent to the living area of a house.

There is no mention of a threshing barn, yet many barns in Britain were used for threshing wheat and have existed since the early middle ages. Where was this threshing performed? Did this building have a different name?

Even though Dr Nicola Verdon is a professor of Modern History and not an etymologist, she was certainly convincing when she explained the meaning of threshold, and it made perfect sense to me.

Related to but not a duplicate of Etymology of "Threshold" which specifically asks about its spelling.

The class VII Germanic strong verb behind English hold is particularly transparent in all cognate languages:

The verb thresh is somewhat more divergent. Metathesis has transposed the r and e in Dutch and the English verb is no longer strong (ppl. throshen, cf. Ger. gedroschen), but the family resemblance is still strong enough to pick them out in a crowd:

One would think, then, that if one were to form a compound of the root of one verb and a nominal form of the other to get threshold and its equivalent the result would be one happy family. The results are far from it:

There seems to be a bilabial/labiodental something in most of these examples, but what exactly is anyone’s guess. What it isn’t, however, is any clear link to hold.

The other problem I have is whether, say, before 825, the approximate date for the Anglo-Saxon Exodus where the word appears, there would have been enough barns of a size large enough in Great Britain for protected threshing and winnowing to produce the word and then somehow transfer it to a doorsill, all the while this strange phenomenon was magically occurring from Scandinavia all the way to Austria.

It seems more logical that whatever follows thresh has more to do with architecture than making sure winnowed grain doesn’t escape on the wind.

I'll mainly address the second bullet point question. The first one is hard to answer - if there is any truth to the folk etymology, it would mainly be true in the sense that any folk etymology is true. It helped a community of later people explain what the word meant.

The folk etymology overdetermines the meaning of hold (to mean "holding in" the thresh), when the earlier forms of the word leave it unclear what precisely the second part of the word is. Even in the modern spelling there's an ambiguity between reading it as "thresh + hold" and "thresh + old." Its Old English forms support the latter reading more ("thresshholde" is Middle English), though note all the form changes in the Oxford English Dictionary's version:

-old/-wold in Old English and -kjǫldr/-kǫldr in Old Norse. So why don't we know what these endings mean? Because even their seeming simplicity here leads to several possible readings:

That should sum up some of the difficulties in determining the form of that second word. We know enough forms that it could be, but not enough to show which form it is.

Not the answer you're looking for? Browse other questions tagged etymology old-english or ask your own question.