Does "shooting for effect" have contradictory meanings in different areas?

I only know one meaning for "shooting for effect". It's the sort of thing a SWAT team commander might say to indicate that no one is terribly interested in interrogating the subjects. Basically, it means two in the chest and one in the head.

When shooting for effect in a combat situation, there needs to be a good balance of speed and accuracy. We need to aim small to miss small. Larger targets are easier to shoot fast because we have a smaller margin to miss, but the smaller the target gets, the harder it is to control our shots at faster speeds. We have to slow down to make sure we can make the smaller shots.

This is mostly evident when trying to transition from a body target to a head target. In the Mozambique Drill we see this the most. After two shots to the body, we transition to a smaller, harder-to-hit target (the head) for one shot. This smaller target is much harder to hit than the body shots we just took.

In competition, shooting headshots or shooting smaller steel plates is the same thing. We need to slow down after the transition and concentrate on the smaller, harder plates, especially at farther distances.

However, there seems to be some confusion about this, and this really isn't something you want to get wrong. There appears to be an alternate interpretation that shooting for effect means an ineffectual show of smoke, noise, and commotion. Basically, it's an attempt to scare someone without actually hurting them.

I was a bit surprised to find this:

It's from Reports of Cases Determined in the Supreme Court of the State of Missouri, Volume 170, apparently from a 1902 decision.

I think we would be doing everyone a service by clearing this up.

What was the first use of the phrase as it pertains to firearms?

Did it have an established legal meaning as suggested by the above court index extract?

Does it retain an established legal meaning?

When was it first used to mean shoot with deadly intent?

A mercenary I knew here back during the war (the guy that took Barry Sadler to hospital after he shot himself, actually) said that the so-called Mozambique Drill (basically a double-tap + 1) originated with an old SAS practice and supposedly dated back to Stirling...but I cannot confirm that and it is tangential to the topic.

That conversation happened at the Europa Bar, if you know what that is.

I think that the usage in the self-defense sense (read legal murder) originated from the phrase...

Fire which is delivered after the mean point of impact or burst is within the desired distance of the target or adjusting/ranging point.

That is from Wikipedia (sorry, but it is a place to start)

This refers to the tactic of "walking" spotting rounds from a mortar into the position marked by an FO (forward observer... usually sitting in a high position closer to the target) using what is sometimes called "ranging fire". When the FO reports that the rounds are falling into the designated area, the order is often called to "fire for effect". This means that the gun should deliver as many rounds necessary for the elimination of the objective.

An N-grams search for "shoot for effect, fire for effect" renders nothing for the first, and many for the second, going back to 1906.

From the Drill Regulations for Field Artillery...

"...fire for effect has for its sole objective the the destruction of the enemy..." 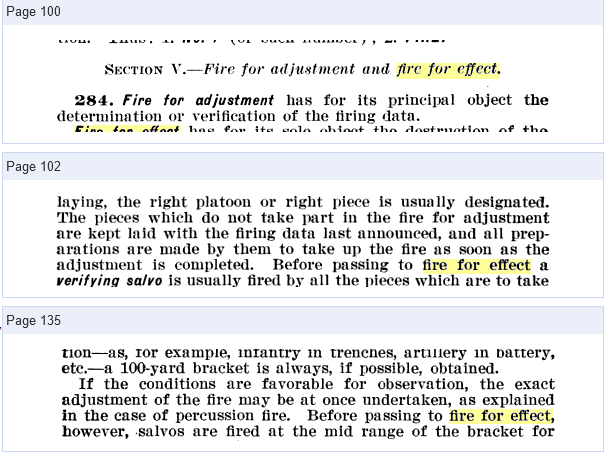 So...bottomline: I think that "shoot for effect" is borrowed from an earlier military usage, and that the quote about the Misery cowboys was a one-off.

One source of ambiguity in phrasing is the word effect. Literally, it would mean producing a result. The Oxford English Dictionary lists this under 2a for "effect, n.":

a. That which results from the action or properties of something or someone; results in general; the quality of producing a result, efficacy.

However, "effect" can also refer to leaving an impression of something, emphasizing the effect on someone else rather than the effectiveness of the action at wounding or killing. This is 9a of the same entry:

a. The impression produced on a beholder, hearer, or reader (formerly esp. by a work of art or literature); the impression produced by a picture, building, costume, etc., viewed as a whole; the look that a collection of features has. for effect: for the sake of creating a telling impression on the minds of spectators or hearers.

So, are you an efficacious shooter, or are you a shooter who wants to make an impression on someone else?

As for the phrase's earliest use, the first mention of similar phrasing I can find is from the Ypsilanti sentinel., June 04, 1845, Image 1 features a story using antequated terminology for indigenous people ("Indians"):

... the rapid firing of muskets made it evident that there the Indians had the better chance of shooting with effect.

"Effect" could mean either thing here (result or impression), but later on in the article "effect" is used to suggest wounding or killing an enemy, as an attacker who fires "without effect" rushes his enemy with another weapon:

Zick dropped his rifle which he had discharged without effect, and rushed on his rival with his tomahawk.

A similar usage in the Chicago Tribune, January 13, 1867, Image 3, suggests that "effect" would involve wounding someone, since the lack of effect means that Mr. Baugh finds another way to wound his opponent:

Mr. Baugh, finding the pistol shooting of no effect made an attack with a wheel spoke, and with one effectual blow, succeeded in felling the convict to the floor.

"Effect" seems often used in the sense of wounding or killing someone, whether or not it's associated with the word "shooting." Arizona Republican., April 02, 1911, Image 1 features a dire headline:

Most results in my newspaper search correspond to this meaning of "effect."

"Effect" in senses not meaning to wound or kill seems parallel to this usage. Relating to court cases, there is this mention of "effect" in the Ottumwa tri-weekly courier., December 27, 1906, Image 5. In this case, "to effect" is a verb meaning roughly "bring about," meaning bring about an arrest. In any case, the result is not immediately doing harm, and (like in the Missouri case in the question) shooting in this manner is frowned upon:

When he appealed the first time the supreme court affirmed the judgment against him, holding that a peace officer was not warranted in shooting to effect an arrest of a mere misdemeanant.

This usage and the one you cite do not suggest an established legal meaning, but rather a description of how the shooting was done for a purpose that goes beyond killing people. They are meant either to bring about a secondary goal (arresting) or to make an impression on the other person.

Furthermore, these uses postdate the use of "effect" to mean producing a wound or a killing blow. In most of the results I can find, "effect" in relation to shooting means doing harm. For that reason, I would assume the second meaning you've found is only used in contexts where it is clear the effect is not lethal from context; "and did not intend to do any harm" and "effect the arrest of a mere misdemeanant" are both clear at conveying an alternative meaning.

I looked for references. Here are two.

FBI REPORT as reported at https://www.roninjj.com/page/page/4336917.htm

Twenty-six of the offenders [about 60%], including all of the street combat veterans, "claimed to be instinctive shooters, pointing and firing the weapon without consciously aligning the sights," the study says.

"They practice getting the gun out and using it," Davis explained. "They shoot for effect." Or as one of the offenders put it: "[W]e're not working with no marksmanship....We just putting it in your direction, you know....It don't matter...as long as it's gonna hit you...if it's up at your head or your chest, down at your legs, whatever....Once I squeeze and you fall, then...if I want to execute you, then I could go > from there."

Then there is this article Shoot for effect by John Stembridge. It is about guns used in Hollywood movies.

So that is two usages.

Not the answer you're looking for? Browse other questions tagged expressions ambiguity legalese or ask your own question.