Going back to 1918, a popular bar song in London was “Knees up, Mother Brown”. Finally recorded in 1938, it was quite popular for a number of years. In this clip from Hullabaloo, we can hear Petula Clark and Noel Harrison sing it with a cockney accent in a duet. As it was preceded with a snippet of “I’m Henry the 8th I am”, I assume it is from around 1966.

Given that it was done on American television, it must have been “clean” enough in context by that time.

However, the same article claims that the phrase originally had a different, earthier sense (Read sexual). I can find no supporting documentation for that statement, but it seems obvious.

Can anyone nail down the original first usage of this phrase, or is it possible it was only an oral tradition?

The reference given in the Wikipedia article for the 1918 date of the song "Knees up, Mother Brown" is to a 1941 fiction, Random Harvest, by James Hilton (see pp. 208 and 211). I see no reason to suppose it was not simply a matter of narrative convenience for Hilton to date the song to 1918 in his novel. Similarly, the claim that the song originated in Britain on Armistice day appears fictional:

... The crowd were still singing "Knees Up, Mother Brown" in the bars below. It sounded new to him, both words and tune, and he wondered if it were something else he had forgotten. He did not know that no one anywhere had heard it before — that in some curious telepathic way it sprang up all over London on Armistice Night, in countless squares and streets and pubs; the living improvisation of a race to whom victory had come, not with the trumpet notes of a Siegfried, but as a common earth touch — a warm bawdy link with the mobs of the past, the other victorious Englands of Dickens, Shakespeare, Chaucer.

OED attests the phrase in print from 1939 in Weston & Lee, Knees up Mother Brown!, a musical score printed by London and Sydney publishing houses.

However, the earliest use I could find was in The Illustrated Buffalo Express (Buffalo, New York) 06 Aug 1922, p. 9 (p. 5 as numbered in context; paywalled): 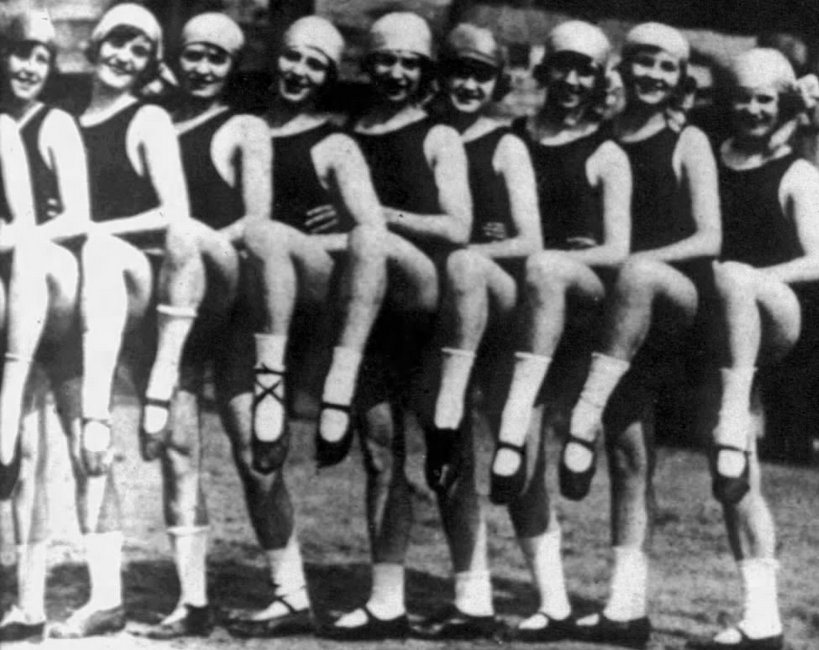 That 1922 reference to "English bathing beauties", along with the London and Sydney locations of the original publishing houses for the 1939 printing, does suggest that the song appeared prior to 1922 in England. A search of UK papers in The British Newspaper Archive, however, turned up no uses of the phrase or variants (for example, Brown/Browne) prior to 1927.

The phrase "knees up" is, of course, also suggestive — of ribaldry. OED, in an entry not "fully updated" since it was first published in 1976, sublimates any bawdy connotations with their "occasionally in extended uses" catchphrase, although the elliptical use of the shortened "knees-up" is remarked:

knees up, Mother Brown n.
....
A light-hearted popular song beginning thus; a popular dance in which the knees are vigorously raised to the accompaniment of the song. So elliptical, as knees-up n. spec. a lively party or gathering.

6
Origins of the word "mother"
12
Why are reveries sometimes called "brown" studies?
21
Where does the phrase "the bee's knees" originate from?
1
Understanding "Mother of God!" or "Holy Mother of God!"
4
Etymology of "Mother Nature" and "Father Time"
3
Why is Peruvian Brown so named?
10
Who's 'she', the cat's mother?