Describing a group of windows?

I'm unsure of the most readily recognizable term among normal people to describe a group of windows in a building.

Here's an example of the type of architectural feature I have in mind. In this photo there are five distinct 'groups' of windows which I'm trying to describe: 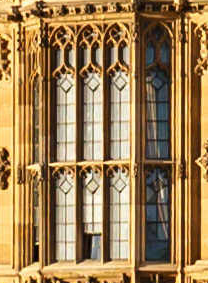 "Please look at the 3rd XXXX of windows from the left..."

Again, being technical correct in an architectural sense is distinctly secondary to the meaning most people would infer from the term.

I think a row of windows would be most recognizable. People would infer that the windows are horizontally side-by-side.

Another word that comes to mind is clump, but that could mean vertical and horizontal. You could specify it and say that: Along each floor, windows are clumped together in groups of 5.

To go along with the updated example,

"Please look at the 3rd clump of windows from the left..."

In your question, you say:

I think the common phrasing you're looking for is window panes.

For the sake of argument, let's say that a window is whatever single piece of hardware that is delivered and installed. Let's also say that we have four windows, each with three vertically aligned window panes, that are installed next to each other. We then have four windows. But next to those four windows, separated by brick, cement, or another building feature, is another four windows.

In this case, the use of arrays or banks becomes more understandable.

Graphically, it would look like this, where each [] is a single unit that was delivered and installed—and which contains three vertically aligned panes of glass:

Or, with an actual picture: 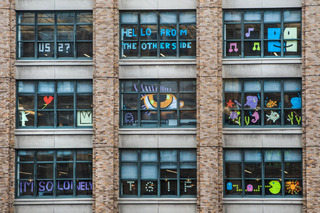 The way I would describe this is as follow:

A 3x3 grid of four-window groups.

In your phrasing, you had an array of window banks. In my phrasing, it's a grid of window groups.

Or, if you don't like group, you could use set, which I also used when I said that a window group described "each set of four horizontally adjacent windows."

Additionally, you can say either a window group or a group of windows, depending on which sounds better given the surrounding text of the sentence.

In short, returning to the sentence in your question, I would say:

Or, if I were describing something from the example I provided:

Please look at the top-left group of windows.

Not the answer you're looking for? Browse other questions tagged single-word-requests terminology architecture or ask your own question.

2
What should be a term of an item in Knowledge Base structure?
14
How do I insultingly describe an extremely ugly building?
16
Architectural term for this large horizontal structure below an external window?
5
In social networks, what is the person who is friend with numerous group of friends called?
4
Term for a perfect specimen or sample
25
How do you describe, in English, a set of different ethnic groups in one word?
3
Term for "apparent brand loyalty"
0
What is the best term for 'perspective options'